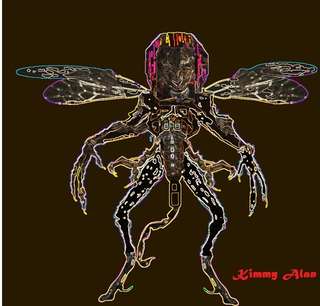 Inflicting pain unendurable
Chronic, yet never fatal
To kill would be charitable
Tormenting was more enjoyable

They reveled in their evil
They’re sadism was insatiable

A woman cried out
“Pray we all to God in Heaven!”

A man mocks, “see before you!
Monsters of pain and suffering
There is no God or Heaven!”

In agony she replied with shrill
“Then why must we dwell”
With these demons from Hell?
Surely if there is a Satan
There must be a Savior!”

The above poem was inspired by Behemoth’s song, Day of Suffering, and the book of Revelations.

"I will swarm against you now
Gods perverse
Wickeds at my side
Misery,"  Behemoth's Day of Suffering

"7And the shapes of the locusts were like unto horses prepared unto battle; and on their heads were as it were crowns like gold, and their faces were as the faces of men. 8And they had hair as the hair of women, and their teeth were as the teeth of lions. 9And they had breastplates, as it were breastplates of iron; and the sound of their wings was as the sound of chariots of many horses running to battle. 10And they had tails like unto scorpions, and there were stings in their tails: and their power was to hurt men five months. 11And they had a king over them, which is the angel of the bottomless pit, whose name in the Hebrew tongue is Abaddon, but in the Greek tongue hath his name Apollyon." Revelations

Written by snugglebuck
Published 13th Jul 2017
Like This?
Poems by Author
Comment
All writing remains the property of the author. Don't use it for any purpose without their permission.
likes 5   reading list entries 3
comments 2   reads 501

Commenting Preference:
The author is looking for friendly feedback.
Re. SWARM OF SUFERING
HadesRising
13th Jul 2017 6:37am
This is truly excellent. You are really stepping up your dark poem chops

Re. SWARM OF SUFERING
souladareatease
13th Jul 2017 2:12pm
Hey Brother-This is Top Shelf!!!
You floored me...I am rooting for You to win!!!
I'm not usually a fan of thicker styled Writes, for many just come off pretentious and adjective-laden filler...This Fine Work was clearly Written with Time and Skill, You blended perfectly the prolific, with the timbre of emotion-It is Truly a Masterwork!!!
You floored me Sir-I did not expect this style from You-Kick-ass-Kudos!!!