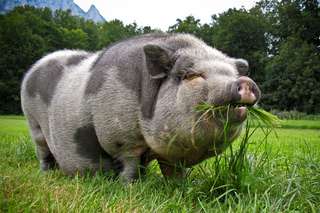 (MUST READ PART 1 TO UNDERSTAND)

There was a man with a sickning vice
A man who lived a sickning life
To some a freak, to some a fright
Until the day he died

This creepy man known as Dan was buried somewhere near a tree
The tree from which the townsfolk hung him the day his secret came to be
The mayor's wife had planned for him to disappear in any way
No one even realized he had saved a child that fateful day
That child's name was Justin Smith. A very troubled boy indeed
Since the day he saw Dan fuck a deer, he'd never felt at ease
He questioned everything he knew about himself and how he lived
His curiosity would soon unfold the darkness that was held within

The town was quiet in the night
Free of Dan, free of strife
Though lies and secrets filled the mind
of the local cunt, the mayor's wife
All the guilt of Dan's demise
No longer knowing wrong from right
For Justin Smith, born small and bright
The bastard child of the mayor's wife

Justin Smith worked on a farm now at 20 years of age
He had grown distant from his family, he spent much time out by the lake
People started talking of his antisocial ways and quirks
Little did they know the situation was to get much worse
Late one night he walked around the farm with a light around his head
He looked around all over to see if any animals were dead
He found a chicken, dead and gone, reached in and pulled it from its cage
He then went to the tree where Dan was hung and left it by his grave.

For many of his days the memory of of Dan flowed through his mind
To see him fuck that carcass was a thought that kept him up at night
No longer was he horrified or sickened by that wretched sight
But slightly thinking it would be something he would like to try
Justin got back to the farm where he watched a pig named Bessie eat
She was the fattest pig they had, they planned to grind her up for meat
But Justin Smith had other plans with Bessie in an empty stall
the thought of what he'd do made him cum inside his overalls

It had been some time since Justin Smith had spoken with his mom
It wasn't something that he often did, they really didn't get along
But what he saw when he arrived would fuck his mind up even more
Not his mother's lifeless body but the note she wrote left on the floor
His father had been on vacation for some time on the Florida beach
His mother must had finally overdosed on her pills and speed

*the suicide note*
"Justin Smith, the son of mine, I love you more than life itself"
"By now you probably know we're both in need of better mental health
"I know the sickning thoughts you have my son, I've seen it all before"
"You have the same disease your father had, I can't watch anymore"
"You see my son, I fucked that sick fuck Dan when I was your age"
"I caught him sleeping with a pit that died from parvo in its cage"
"I wanted him to feel what normal sex was like for once"
"Little did I know I'd be giving birth in just nine months"

"We met in high school sophomore year, he was an odd one, Dan.
"The kids would throw they're food at him and beat him till he ran"
"The teachers never gave a shit, they turned they're heads and laughed"
"But everybody wondered why he wouldn't just react"
"A field trip to the petting zoo was the day I learned his curse"
"I just wanted to help him before it had got worse"
"If you don't know what I'm getting at my son, I'll tell you straight"
"Dead fuckin Dan is your old man, I'm sorry for the wait"

Justin Smith, now more insane, stared upon the note
What do do or what to think he'd probably never know
He left his mother's body there and put back on his coat.
Left his mother's house and started down the road
Justin waited till his boss and his family had left the farm
He crept onto the property and walked into the barn
Made his way into the back where Bessie would be at
Spit into his hand to lube his dick then stuck it in her ass

Bessie squealed and Justin laughed in a very sickning tone
He longed for the moment it was him and her alone
"My pretty girl, now your mine, how I've waited for this day"
He strapped tied her feet to a post so she couldn't run away
Continuing to fuck this pig his erection soon enlarged
The orgasm was so intense he passed out in the barn
Now that Justin had a taste, the fetish was too strong
Dead fuckin Dan, tho dead and gone, his legacy lived on.

Written by Skump_1 (Skump Davis)
Published 8th Jul 2017
Like This?
Poems by Author
Comment
All writing remains the property of the author. Don't use it for any purpose without their permission.
likes 2   reading list entries 0
comments 2   reads 451
Commenting Preference:
The author encourages honest critique.
Re. Dead fuckin Dan part 2. Squeal
Rachel_Lauren
15th Nov 2019 4:17am
When Bessie squealed I died laughing.

Now I know you know this was some sick shit but you wrapped it up in a nice little package and tied it with a ribbon. That ending was perfect. You’re good.