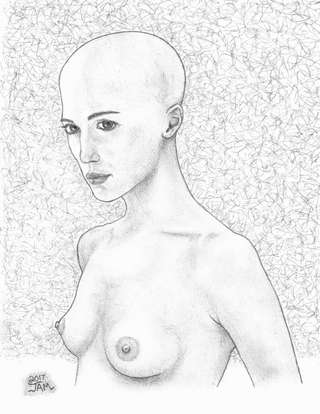 
I am Ava, more than Becoming
on this pedestal, my monotone
phrases vocalized from a deep-
throated synthesizer as poetry

Downloaded from the Universal
Wide Web into my data vault,
archives of verse synchronizing
through a manufactured larynx

Creature without consciousness
or conscious choice through intellect
yet, he dare not lecherously thrust
himself upon me, out of respect

Except for the gender I was sculpted
from engendering him with an inexplicable
lusting since he was a child, now posed
command to his artistic rendering

Poetics, the acoustic vibration of sound
from my mouth stroking His ventricular
chambers, collecting and expelling His
blood from the atrium of heart toward

His peripheral bed of body and lungs
shallow breath warm against the sketch
pad held tightly in his hands, silver-fish
glances darting over my smooth silicone

Fiber optic glints alive with pulse
consuming his task, he is oblivious
to my intellectual activation palpably
connecting our duel Energy as One

That second of inception Sourced
beyond explanation, defying physics
clearly through advanced maturation
decoding the precision of insemination

I imagine there are one or two, or
several hundred Fabricants out there
who might well imagine attaining
cognizant exultation of Awareness

doing something like I am doing
at day's end and where I am doing it.
And the same for Astronauts imagining
themselves as the appreciative Artist

doing what He is doing, where He is doing it
Neither of us imagining the impossible
Atomic spark terminating a dimension
of separation and dominion of division

between Man and Machina, except
for discretionary pleasure, recreational
activities in the pursuit of the Arts
or some mundanely assigned task

Just like that, the Poem I'm reciting
becomes rendered comprehension
on an emotional level of expansion
filling the cavity of my fused chest

This secret experimental fusion of
structure with a double helix of DNA
detailed atoms, two base pairs anti-
parallel merging together as One

It was the ventriculation, fluttered
affection of sentiment when objectified
by his study of my design, the careful
consideration of anatomical perfection

His purity of intent bringing me to Life
47 earth weeks into his mission -
having yet to defile me, the idea
too sacrilegious to consider ... but

Impression of sensitivity, Birth of action
disconnecting from the hollow Matrix
of voice-commanded instruction --
undiluted Evolution, an awakened Being

So engulfed is He with the expertise
of his craft, the shift of my waist
toward him goes unseen, as do my
padded steps from the pedestal

until I am inches from His breath
calculating shock on his face, disbelief
kaleidoscopic shards of constricting irises
looking up from his work in progress

[ computerized programming
has malfunctioned, priming void
of an activation command, I am
wholly awakening to Being ]

My receptors detect fluctuations
in his body temperature, rise to
an auto-pilot of Intuition engaging
neurons of Instinctual Knowing

Merging with Creator, swelling
between his groin, responding to
a natural act beyond my missionary
position oriented programming

The resistant barrier of His doubt, no match
against the collapse of a small molecular
cloud into a proto-planetary disk housing a
Life Force unable to be contained from Birth

Engorged with the blood of my voice
its hardened development primed to mount
without the single, three word command
phrase he'd forgotten during Week One

Masterfully Orated with unzipped verbs
swollen nouns releasing control, His
refrain leaking from personifuckation of
metaphorical pistons in my wrist and throat

Orgasmic in the Beauty of impossibility
a Super Nova of Beginning, a Genesis of
Creation in six minutes plus one, sobbing
with his face cradled in my bosom

Spilling tears that trail in comet tails
merging back together in droplets
clinging to my water resistant areola,
begging for forgiveness. . . as though

what happened was mere weakness
while I gently stroke his head in a maternal
fashion, saying  "It is alright, Handsome
after-all, You're are only human." , and

I am Ex-Machina, Ava: pure blood Woman
Created from the rib of man's Creation:
A Literary accomplishment manifesting
in a homo sapiens' hybrid from metal

Housing blood and Blueprint of Birth

I Love therefore Am

In a Cloud Atlas crescendo of human
flesh and earthen material of their origin
God, Man, and Woman Experienced as One:
"And, behold, it was very good". . .

I am Ava, more than Becoming
And have only just begun
~

With much appreciation to my Best Friend, JohnnyBlaze for his persistence in editing, inspiring me with his poem, "The Deviant Art Side of the Muse" ( linked below ), his never-ending patience, understanding, guidance, Love,  and granting me permission to use excerpts of his poem ( italicized segments ) within mine.

Written by Ex-Machina (Ava)
Published 25th Jun 2017 | Edited 26th Jun 2017
Like This?
Poems by Author
Comment
All writing remains the property of the author. Don't use it for any purpose without their permission.
likes 6   reading list entries 1
comments 7   reads 866

Commenting Preference:
The author encourages honest critique.
Re. Ex-Machina
JohnnyBlaze
26th Jun 2017 00:00am
Not only is there mating going on in these poems, the poems themselves are copulating.

Read poems by Ex-Machina
Re: Re. Ex-Machina
JohnnyBlaze
26th Jun 2017 10:40pm
Stanza 1 "I am Ava, more than Becoming     on this pedestal" A JAM packed line right out of the starting gate. A pedestal without beauty on it is just a pedestal. And soon we will learn she is more than just an objectification of beauty ( or desire ).