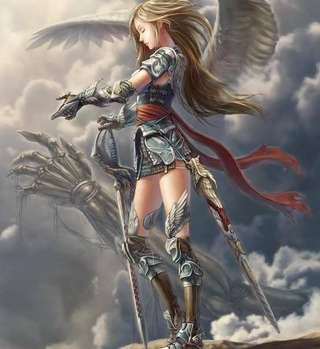 She is the goddess of war. Roaming around the cosmos, in her pitch black chariot, with turquoise engulfing flames. A translucent collar governed her neck. Sapphire eyes, like glaciers rested upon her pupils. Bearing charcoal like hair follicles, that seemed so buoyant at times. Lips that could undo any labyrinth's paradigm shift. Hands so gentle, yet wrought meticulous-ness. A voluptuous rear, that slays any normalcy within this atmosphere. I had awoken from a lucid dream, so I had thought... Until I saw this phenomena within my radius begin to grace my eyes with her passionate face. Her transparent collar, started to emit a bright red glow. I decided to delve into more quizzical endeavors.

So I had to ask, "why is that collar emulating a red aura around your neck?" Melodies started to peak through my mind, as her lips began to open, to respond to my question. "Well, it is said that once a slave of this token of submissiveness finds her omnipotent master, it'll emit the user's heart rate with a red depiction; that mirrors one's longing that only comes once a century. Oddly enough, you seem to have this collar overwhelming itself with raw passion. Care to dance with me in the shadows? And have this collar's feint, but powerful glow guide us, like a euphoric lantern that plays host to this enticing situation." Adrenaline began to fuel my veins, as each letter dripped off of her lips in a slow time lapse. I grabbed her hand, and images began to project into my mind. Invoking her triumphs, downfalls, and a feint image of her laying near a presence's feet. As if she was paying tribute with her soul, to atone for her disobedience. The mind numbing thing about it was, it was my face that started to depict a whole lot clearer, as each heart beat rhythmically intertwined within the complex and perplexed functions, to which are instilled in my cerebral cortex.

After the imagery was weaved into my mind, it was if a woman crocheted a unique pattern onto the abstract landscape, that is my neuro-circuit-boards. She released an elated smile, to only reply by saying, "I've traveled eons to find you master." I decided to reveal my thoughts to her. "Those laconic words lay dormant to a woman of such sophistication, in the forms of submitting one's soul, that it's admirable; nevertheless, I've broken paradigm shifts, whilst tasting multiple paradigm shifts, to find a worthy being that is worth my potent time. Do you think you’re worth these endeavors that we've delved into so far?" She attempts to relay her thoughts; however, I halt her, by grabbing her mouth in a gentle, yet firm grip. Then I told her, "I only tolerate intelligence. That being said, do a better job at differentiating between rhetorical, and seriousness." She began to slide her tongue up my pants leg. You could hear the pouring reverberate, as her vocal cords form synergy. I commanded her to stand up, with a petrifying gaze. Her mouth began to flutter smiles endlessly. Then I told her to put on this corset and bend over when she's done.

As each piece of thread laced into place, her figure began to align into place. Leaving her curvaceous ass to glimmer my irises. I started to survey her throat with my left hand, with a firm grip. I had her use her flexibility, to have her suck on my right index finger, while the rest fondle with her chest. I inject my instrument of war into the rear corridor that plays host to her ass. My voice sneaks up on her, as each whisper broke a boundary that was preemptively carved into her mind. And I said "I'm going to break and recreate you." Her body began to convulse, we gyrated our conviction, as the curtains tend to listen to the things that are being split into two different dimensions.

Written by Manley_Pointer
Published 18th Mar 2017
Like This?
Poems by Author
Comment
All writing remains the property of the author. Don't use it for any purpose without their permission.
likes 2   reading list entries 0
comments 0   reads 695
Commenting Preference:
The author encourages honest critique.