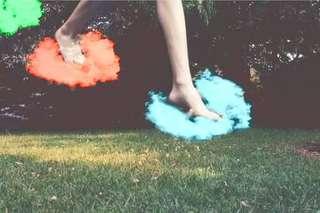 A beautiful chaotic voice began to skip my body,
like a pebble onto the pond of adventures,
skipping me into the unwarranted;
slumbering reality.

Grey withered leaves flooded my feet,
dissipating as they touched my ebony boots,
flickering with a purple hue, as they bid
their farewells.

Rainbow branches were scattered amongst
violet waterfalls, normalcy was
cascading at the same rate of the waterfalls.

I picked up one branch, and it began to pulsate
all over my palms as I gripped it,
sending thought provoking chills
throughout me; enticed, and wanting to be enlightened,
it eclipsed any foreseeable fears to come.

A charcoal tree,
with rainbow leaves loomed into the distance,
a terrifying silhouette if you couldn't fathom
its existence.

I usually play the weary,
that day I played the fool,
delving deeper into my interest,
walking closer to the tree;
the closer I got,
the more the branch pulsated.

I was five steps away from either
achieving more euphoria,
or waltzing into a beautiful massacre,
curiosity became my sword and shield;
marching me onto the unknowing.

As soon as I stood in front of it,
the branch began to tremble in my hands,
convulsing it's fears into my palms,
whispering it's anxiety,
as I held it.

A voice seeped and reverberated into my ear canal;
fuchsia lips came into fruition,
separating the gates of tranquility,
"awaken, wander, conjure,
and rejoice on the clouds of the unwelcomed."

My mind was jumping rope with those words,
each emotion was invoking a speed bad
resembling my heart being warmed up,
for the final blow.

were the steps signaling to new heights;
connecting the tree's branches,
that formed nestling hands.

As I hopped onto the poofy baby blue cloud,
it shape shifted into a buoyant translucent pedestal,
as it exhaled a humanistic sigh.
I was dangerously excited at this point.
Each cloud mirrored the outcome of the baby blue one,
solidifying mundane and uniqueness at the same time,
I thought that was beautiful.

"Was I hopping to hell,
or leaping to freedom",
were the thoughts hanging
on the scale of volition.

After I arrived onto the final step,
I hopped onto the branches;
the first step clicked and locked
my legs into them,
cementing me into caution.

The branch I was holding,
levitated out of my left hand,
it stood afloat in between the tree
and myself; a rainbow aura started
to emit.

The aura began to whisper,
"welcome", and then proceeded
to snicker.

Feeling imprisoned by those words,
it became time for some mirror talk,
the stranger in the reflection.

I closed my eyes,
and my conscious greeted me,
as it held my heart on its
key chain of emotions.

"To what do I owe this pleasure?"

"Well, I've no idea what's going on;
however, I'm enticed to know more,
yet apart of me feels as if
I'm enthusiastically throwing myself
into the wood chipper of solitude."

"I see, juggling curiosity,
and logic; rather a tight rope
you're dangling on."

"Yeah, so what do you think I should do?"

"I believe you should keep your wits about you;
however do not halt your desires out of fear."

"Thank you for those wise words."

"Don't thank me, thank yourself,
for I am you as well, never forget that."

Misery began to cloud my judgement,
penetrating my optimistic willpower;
invoking indecisiveness,
oh how I hate the feeling of uncertainty.

It felt as if a pair of malevolent jade lips
pierced my mind, and began dripping
all over me with distasteful notions.

As I was shackled to the tree,
my complexion started to shift
from a calming alabaster hue,
to pale on the left side,
and volatile darkness on the right.
A lover of beauty and chaos was forming,
a optimistic pessimist,
such a lovely and contradicting combination wouldn't you say?

I had awoken, and had felt indifferent to what just happened.
Angels and demons were cycling around me,
enriching my body with each of their triumphs and downfalls.
It was intoxicating, and lovely.

A mirror attached to a rope,
swung left and right,
somewhat like the pendulum in Edgar Allen Poe's
"The pit and the Pendulum".

I tapped the mirror with my right index finger,
as it swung right, halting its motion.

Looking directly at my own pupils,
seeing sadness become a piece of cloth
I had never worn before.

I threw my right hand at the mirror;
It became quicksand,
allowing me to grab myself.
I whispered into my left ear,
"I'm afraid of letting you die within my psyche."
"Don't be afraid, fight it, and tell it to fuck off;
they don't love you like I love you."

My face began to twitch, and shake,
as I spoke to myself.

It impaled the upper left of my chest,
turning the internal nob to the left.
The faucet began to release the heartless.
I began to drown in my madness,
I knew how to survive,
but I was content with this form of insanity.

Written by Manley_Pointer
Published 2nd Dec 2016
Like This?
Poems by Author
Comment
#EdgarAllanPoe #MentalHealth #mirror #narrative #SelfReflection
All writing remains the property of the author. Don't use it for any purpose without their permission.
likes 3   reading list entries 0
comments 3   reads 508
Commenting Preference:
The author encourages honest critique.
Re. Deteriorating
Erotic_Goddess
2nd Dec 2016 1:19pm
Holy shit!! Thats all I can even say atm! Just take a damn bow!  :)

Read poems by Manley_Pointer
Re. Deteriorating
HowlingWhelms (Noire)
8th Dec 2016 4:06am
I really want to get into this one because
it's overwhelmingly interesting, so  i
will be returning

Gawd i love your brain lobes