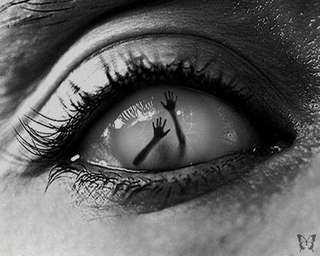 Let me erase your pain

She had laid her fragile vessel across the dark onyx floor,
within the cellar of rejuvenation.

Her ethereal astral rib cage had her soul
dancing in the flames of dictatorship;
it was using her memories as thread,
her tears were the needles,
and her misery was the fabric being sown into it.

I hoisted her up onto a translucent mood barber chair,
the current hue was scarlet.

I began tying her ankles and wrist with her agony,
reminding her of the pain
she has accumulated,
invoking introspection.

My left foot pressed down
on the lever attached to the barber chair,
pulling the back end of the chair,
arching her back upwards on the chair;
she began to bellow out inner torment,
as the alignment took place.

I had grabbed a pair of clear dainty scissors.
Her body began to twitch and resist in
an uncontrollable urge,
the convulsing was commencing,
the more I neared her back.
The more her ethereal astral rib cage was exposed,
and was attached to her spine, invoking distraught.

I began to clip and snip the rustic girdles
soul-bound metallic cords. The more I clipped away at her,
the more her body recoils and discharges anguish;
now the lever on the faucet is broken, her nightmares
are leaking out of her ethereal astral rib cage.

Each droplet that dripped out of her,
projected a scenario that encompassed those dreadful nights,
her anxiety was captivated that night.

If one was to lay on their back,
you'd become the spectator
of her chronological misery;
viewing each reel,
like an electronic shop
that has setup their T.V.s
on the display window,
in the amount of 30,000,
a plethora of sadness.
Each memory became a pair pale hands
typing on a celestial typewriter,
the fabric for the parchment was my mind;
each letter, and each keystroke that was made,
sundered understanding of her,
like a javelin piercing mental armor.

She threw her right pupils at me,
like a baby seeing their mother die,
evoking urgency. The pupil split
into two, forming a mouth.
I was able to make out what it said,
by reading it's forest green lips,
"help me", were the words that lurked
into me. I started to hasten my efforts.

Finally, I was clipping the final cord;
her eyes transcended into a movie theater,
emulating a turquoise rift, an entrance to her mayhem.
I went to peak inside of it,
I was then transmitted inside of it,
because it vacuumed me into it.

I was in her subconscious,
a hall of memories; portraits
of each instance, hung on the wall
of perpetual remembrance.

As I delved deeper,
I observed a grey wall,
it listed "the forgotten",
her desires,
and goals were portrayed,
they're covered in metallic cords;
asphyxiating their existence.
I reached in my left blue pocket,
retrieving my clear scissors.
They began to pulse in a red hue,
the more I neared the portrait.

I started to decimate each cord;
as each one fell,
it began to hiss in disgust,
before disintegrating.
The last cord was unplugged now,
transferring me back to the cellar.

Lenore was on the floor with
her charcoal hair shading the
alabaster complexion on her forehead.

I picked her up, and leaned her forehead onto mine.
Her eyelids unlocked, and our eyes began to interlock.
Her pupils began to split into two again,
time wasn't spared, "thank you."
I kissed her forehead, and cradled her back to reality,
as my chest became the nest, for which she'll feel safe
to roam around, before venturing on.

Written by Manley_Pointer
Published 27th Nov 2016 | Edited 29th Nov 2016
Like This?
Poems by Author
Comment
All writing remains the property of the author. Don't use it for any purpose without their permission.
likes 6   reading list entries 0
comments 6   reads 508
Commenting Preference:
The author encourages honest critique.
Re. Let me erase your pain
Erotic_Goddess
27th Nov 2016 2:27am
Moral of the story as demented as it may be perceived.... cut the strings and ties of what causes pain or ales you and allow someone else in? I will be reading it again... Truly enjoyed this one!

Re: Re. Let me erase your pain
Manley_Pointer
27th Nov 2016 2:37am
There're no morals, but trophies of beauty dipped in agony, glistening on the wall of enlightenment.

Read poems by Manley_Pointer
Re. Let me erase your pain
PoetsRevenge
27th Nov 2016 5:09am
This is so madly intricate I want to read it again....  The creativity of image and wording is amazing...

Read poems by Manley_Pointer
Re. Let me erase your pain
Anonymous
27th Nov 2016 5:11am
Interesting write ....witnessing the peeling of the layers.