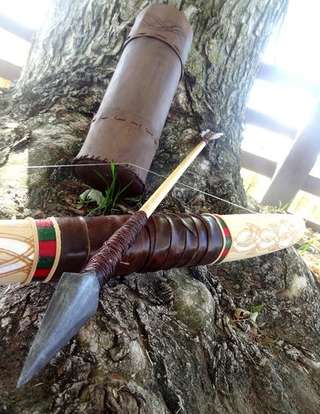 There are things you just know
their familiarity breeding recognition
from long forgotten remembrance;
a black pair of sentient eyes
emerging from the forest
having observed you for an hour
beneath the dense under-story.

Counting the leaves that jumped
to their death into your flaxen hair
brittle ribs sticking like feathers
from a stranded web in the wind.
Gauging the split of water around the boulder
you’re sitting upon – your face distant,
engineering a means of expression
to express a means of sacred honoring
what falls short of honorably expressing.

You don’t know how you know things –
like how you’re being watched
you just accept this feeling as truth
whether ever confirmed or not.
That some things have no explanation
readily understood (perhaps remembered
would be a better term) by anyone.

So, when the arrowhead splits the ventricles
of standard reasoning in half, and the shaft
follows through clean from the release
leaving doubt and indecision freely bleeding,
your existence flashes before your eyes
ripped metal against the crest opened wide.

You see destiny wading slowly toward you
for the first time in your grappling Life
-- as a Light that can’t be defined.

And with nothing but intuition and trust
that you’ll never fully understand, accept
the extension of his outstretched palm
without a single word or second thought.
~

Written by Ahavati
Published 23rd Nov 2016
Like This?
Poems by Author
Comment
All writing remains the property of the author. Don't use it for any purpose without their permission.
likes 17   reading list entries 3
comments 20   reads 866

Commenting Preference:
The author encourages honest critique.
Re. Arrowhead
crimsin (Unveiling)
23rd Nov 2016 9:31pm
I feel your very spirit and his in this write Sage One and it is divinely beautiful..

"And with nothing but intuition and trust
that you’ll never fully understand, accept
the extension of his outstretched palm
without a single word or second thought."

Read poems by Ahavati
Re. Arrowhead
standingmyground
23rd Nov 2016 10:28pm
This is my favorite groping of words . . .

You see destiny wading slowly toward you
for the first time in your grappling Life
-- as a Light that can’t be defined."

You are so right, my friend, there are things we
observe or think about which has no discernible explanation.

Read poems by Ahavati
Re. Arrowhead
Anonymous
23rd Nov 2016 11:23pm
wow!
My friend, I needed a few reads of this, but damn it's as solid a write as I think, I've ever seen. I probably need to go over it a few more times to actually be able to give it fair justice.

That first stanza has my mind busy; those first three lines remind me of myself as a parent and my daughter asks "why dad" and truly in my heart my answer is purely "just because I know" it's the mix of education, life & experience that gives us foresight isn't it? But then the next four lines change the direction completely and well my melancholy was really is it a vouyer who looks on or is it a protector / teacher figure keeping a watchful eye over those who need it. Very interesting indeed.

That second stanza, packed with such imagery that I nearly got lost in it.
Leaves falling into hair (beautiful)
Ribs, feathers, a stranded web in the wind
(well I found this sad but breathtaking at the same time)
The engineered facial expression and sacred honouring are memorable. Though I did bump in the read at "what falls short" would "which falls short" be smoother?

That third stanza is the highlight for me in this poem. It stands out for it's truth. How do we know things (or remember them) really? We just do!

When the arrowhead enters the poem I'm left wordless... You know that could so nearly end up being cliche' but you execute the lines with such care and dedication that for a moment I was just reading that part over and over...

Then...
"You see destiny wading slowly toward you for the first time in your grappling Life
-- as a Light that can’t be defined." (well that scared the life outta me)

And yes well it has to end taking his outreached palm.

I'm richer for reading it. Thank you for sharing it!

Re: Re. Arrowhead
Ahavati
25th Nov 2016 9:11pm
Thank you so much for your time and consideration, Al. Both are greatly appreciated. I'm glad it didn't come across as cliche. It's amazing how Life has so many variations of something that makes it unique in and of its own way.

I appreciate your suggested edit and will have another look at it.

Again, thank you for your time and attention. Everyone is stretched so thin at this time of the year, so I truly appreciate it.

Read poems by Ahavati
Re. Arrowhead
Anonymous
23rd Nov 2016 11:51pm
There are some words placed together so exquisitely that I can't find a proper way to express my appreciation. I will therefore sit in silence and let it speak for me.

Read poems by Ahavati
Re. Arrowhead
DanielChristensen (The Fire Elemental)
24th Nov 2016 3:23am
This strikes me as particularly zen ink.  The arrow you describe seems like revelation, inspiration, the sudden dawning. I have been studying a lot lately. Suffering is an opportunity for awakening. As is fear, anxiety. Every next moment carries the potential.

In an interview with a cast member of a show I follow, this man called his character’s drive to exonerate wrongly convicted people an "unnameable abiding." Which also struck me as quite zen. Spoke to my teacher about it briefly after class.

Thanks, Daniel. I appreciate your kindness. Zen resides in the heart of much that we don't realize.

Read poems by Ahavati
Re. Arrowhead
Kasai
24th Nov 2016 9:03am
I am just, utterly speechless. The profundity of this poem is overwhelming to me, I saw many meanings each time I read through the exceptional lines, all of them stunning and beautiful...

Read poems by Ahavati
Re. Arrowhead
wanderer (Faceless)
25th Nov 2016 4:11am
beautifully expressed feeling/thought. i adore you for this.

Read poems by Ahavati
Re. Arrowhead
The_Silly_Sibyl
27th Nov 2016 8:13pm
The narrative core of this one is a little vague; I wasn't sure, fairly often, whether you were talking about a spiritual entity or an actual, physical arrowhead, as depicted in the accompanying picture. However, I liked that confusing aspect, and the poem as a whole, which creates a sense of a place and a thought process far back in time and space, in an age of mythology as absolute fact, when the woods were unexplored and full of dryads and hidebeasts. Thank you very much for the read.