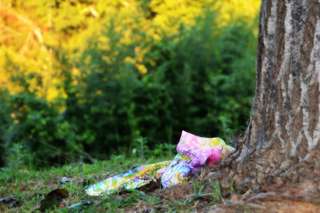 Such as the bandanna I wore on his birthday
sitting outside on the phone while it eloped
behind my back, down the curled branch of hair
into the waxing moon of a September Equinox

Survived steadfast eleven days she did
anchored deeply against the earth’s abdomen⁠—
winded coughs of rain, wild animals, strays
rooting about the place for sustenance

Whether virgin in the field, plucked by bleeding hands
stripped naked from its husk in the mill and spun;
or, stretched thin on the factory rack to be sewn
as a bandanna adorning a woman’s coiffure⁠

Cotton weathers the turbulent doubt of uncertainty⁠—
washes out like a single woman, strong and clean.
~

Written by Ahavati
Published 6th Oct 2016 | Edited 27th Nov 2019
Like This?
Poems by Author
Comment
All writing remains the property of the author. Don't use it for any purpose without their permission.
likes 22   reading list entries 4
comments 0   reads 813