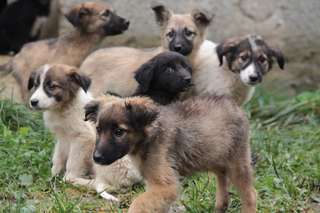 It’s understood
when a stray snaps
at a hand(out).
It’s their past,
their experience,
a proven defense
against steel-toed
smiles posed as
mercy in the street.

It’s the chance
you take by
opening your heart
to get close to it.

You can’t become
discontent or take
personally its lone
misconception
of a life it only
lives to possess,
or doesn’t understand
how the taste
formed as
teeth into
the long roots
of its mouth.

Anubis whispers
the difference
between natives,
immigrants, and
tourists; Anput
whispers who
its heart should
trust, who not.
But, sometimes,
years of self-neglect
and societal conditioning
confuses its natural instinct.
It forgets who it was,
can no longer hear
its canine gods,
assumes the lie
as a life of truth
it must endure.

One does not become
self-focused or doubt
their own intent
through light and
goodness of heart.
Or, regret having
opened to a
waning sentient
despite what
pain manifests.
It's the experience
one must chance
to survive ensuing
guilt for not ever
having tried.

Some strays are ready
to receive; others,
content not missing
something they've
only ever dreamed.

Some already belong
to someone else,
and suffer from
a sacrificial choice
so palpably prevalent
nothing you extend
will ever seem secure
enough to get
them to gravitate
toward truth, to lick
the birth extended
from your finger,
and never again
beg for scraps.

You can recreate
every hieroglyph
and broken clay slate
you've translated
on independent
evolution from dirt
before them,
but, it may never
be enough to get
them to see the
lie they're living
is killing them
more than the
pain of truth
ever could.

The dark stray
with sunken eyes
and thinning coat
sees tumbleweeds,
has-been lives
and wannabes
it's committed
its life to believe.

And you,
depleted,
accept leaving
to preserve
one minuscule
truth you'll never
surrender to a
lie in the streets.

Persistence factors
the difference
between the giver
who desires only
to Love and serve
and the predator
out for a trophy
from the kill-shot
of a stray's ability
to produce for
the factory, or
dinner table.

Experienced strays
are street-smart,
smell the difference.
And, possess a
saint's patience
to wait it out.

You ask me
to share the
wisdom, when
to hold on,
when to let go.
Each stray has
their own unique
experience fired
by belief or
lack of faith
in the fruition
of dreams.

I would say to you:
as long as you
build strength,
let them bite;
let them resist.
Let them circle you;
It’s part of the process.
Let them snarl;
Let them bark until
their lungs are spent,
lunge until
their weakened
state begs them,
...quit. and, lying
there, half-starved
of life, gasping
for breath -
they exhale
and submit
to Love.

I would say:
if your strength
wanes thin,
if your arm
numbs from
extended offerings
that have crusted
between time's
stained fingertips,
and you smell
the frozen Winter
coming over the
mountains from
its Autumn hunt,
and you have no coat
to cover your bones,
turn. Walk, or,
run toward warmth.

Do not look back
into the fading shadow
of what you've left
or you’ll trip and fall,
become embittered
in rock salt.
Look only toward
the crossroads
you approach,
toward those
kindred strays
of love and truth:
those destined as
Sacred Contracts.
~


Author's note (something I've never done but feel led to on this one): 16 years ago I was dying in a spiritually defunct marriage. Torn between what direction I needed to go to save myself, I fasted for 14 days (only water), meditated, and prayed. On the eve of the 14th day I was granted a vision of abandoned puppies in the corner of a dark alley. They were all different colors. Black, white, red, spotted, golden, brown, etc. Yet, they were all from the same litter. They would fight to the death over meager scraps tossed to them from passers by. And then consume those who had died. It was one of the most horrible things I'd ever witnessed in my life. I wanted to turn away and yet save them from themselves at the same time.

They were starving, cold, and alone. I was behind a line that instinctively I knew I couldn't cross. There was all kinds of healthy food at my disposal to offer them.  So, I began coaxing them with food in my hand, begging them to cross the line and survive. A few would venture from the dark alley but something would scare them back into the corner before they reached my hand. There was an hourglass running down fast, and I knew I would have to turn and leave when the final grain of sand fell through the passage between north and south. I was on my knees begging the puppies to please eat, please live, please survive. That all they had to do was venture from that alley...just trust.

But none could, and the hourglass vanished, as did the vision. I was surrounded by nothing but white silence, deafening silence, like nothing else existed. A voice said, "You have fasted and prayed for direction and I have heard your plea for the sustenance of survival. A door will open tomorrow and you will go forth into the world from all you have known or believed. The puppies represented all peoples of the planet. All races. All  nations. All religions. Yet they were all born of me. You see how they fought and killed one another for lack of love."

"Those who trust to leave what they know behind and seek shall find their destinies if they continue on the path. However, those who look back will become bitter salt, as did the parable of Ado. You cannot take anyone with you that is not willing to leave. You cannot save anyone who is not willing to save themselves. You are to walk onward, meeting only those who cross your path. You are not to leave the path unless I direct you to follow me. You are to Love and plant seeds. But, most of all, you are to remember you are never alone, for I shall always be with you, and shall send you signs along they way when you feel you can't go on."

- The next day a fully furnished basement apartment became available through a friend of a friend, and hadn't even been advertised yet. It was exactly what I needed and the price I could afford. I left everything behind that had accumulated in my marriage, but still split half the outstanding debts to be responsible, despite the fact that my salary was half what his was. I carried only what was mine personally, my mother's and my grandmothers that I could pass them down to future generations. I cannot tell you how scared I was - it's not easy walking away from decades of building. From a home you've owned, a garden you've planted, flowers you've sown. I only worked part-time. But, I survived that, and a lot more, still am. Yet, honestly I have never been happier, nor has the future looked brighter despite dust clouds that rise.

I don't know why I feel led to share this intimate story with you all. I am a very private person, and less than a handful of people know of this, only those I expressly trust. Unless, there's someone out there who needs know, and it was given to me for such a time as this. So I open and trust all is as it should be despite impending judgment.

Written by Ahavati
Published 2nd Apr 2016
Like This?
Poems by Author
Comment
All writing remains the property of the author. Don't use it for any purpose without their permission.
likes 14   reading list entries 6
comments 17   reads 1154

Commenting Preference:
The author is looking for friendly feedback.
Re. Sacred Contracts XXIII: The Nature of Strays
Anonymous
2nd Apr 2016 10:12pm
fulfilling..that's the word that comes to mind
when reading you..and i thank you for sharing
such an intimate and intricate part of yourself
here Ahavati.
you have inspired me beyond measure.


"Those who trust to leave what they know behind and seek shall find their destinies if they continue on the path. However, those who look back will become bitter salt, as did the parable of Ado. You cannot take anyone with you that is not willing to leave. You cannot save anyone who is not willing to save themselves. You are to walk onward, meeting only those who cross your path. You are not to leave the path unless I direct you to follow me. You are to Love and plant seeds. But, most of all, you are to remember you are never alone, for I shall always be with you, and shall send you signs along they way when you feel you can't go on."

thank you for the affirmation

Re: Re. Sacred Contracts XXIII: The Nature of Strays
Ahavati
- Edited 5th Apr 2016 6:42pm
5th Apr 2016 6:35pm
Affirmations are beautiful things, especially
when you didn't realize you were a part of one.
Thank you, and, you're very welcome.

Re. Sacred Contracts XXIII: The Nature of Strays
crystalcolumz (-Shannon-)
3rd Apr 2016 6:20am
Powerful. The veil splits open and peek-a-boo. You see me? I see you.
The veil...
Thank you

Read poems by Ahavati
Re. Sacred Contracts XXIII: The Nature of Strays
JohnFeddeler
3rd Apr 2016 7:00am
that is a fantastic & inspiring revelation.
it's okay to not know where we're going,
as long as we know how to get there...

Re: Re. Sacred Contracts XXIII: The Nature of Strays
Ahavati
5th Apr 2016 6:36pm
And there have been plenty of sacrifices too.
Thank you for sharing.

Re: Re. Sacred Contracts XXIII: The Nature of Strays
Ahavati
5th Apr 2016 6:38pm
That wasn't the longest I've fasted. Twenty-one days is the longest.
It's the sure-fire way to receive concrete answers to what you seek.
That or you die and don't have to worry about it anymore. ;)

Thank you for sharing.

Read poems by Ahavati
Re. Sacred Contracts XXIII: The Nature of Strays
_shadoe_ (katyusha)
3rd Apr 2016 5:12pm
you give so much of yourself to us when you write, miss vati, it is humbling to read you
xo

Read poems by Ahavati
Re. Sacred Contracts XXIII: The Nature of Strays
RainC_Tara (rain1courtel)
- Edited 4th Apr 2016 6:40am
4th Apr 2016 6:36am
Jesus Wept! That's all I need to say in regards to this brilliantly written, sublime offerings. Compassion for the suffering is how I see myself within this ink. Many should be touched by this, I know I am. Thank you for sharing this.

btw... I despise reading lengthy ink on the net and often stray away from it,(just my personal preference and lack of patience, even though there's a great chance of missing out on incredible writes), but I skipped this ink three times before doubling back to read it. Lead by something inside of me, urging me to stop, have patience, and witness the bleeding of a heart within the lines. I'm so thankful I yielded to my internal voice. This was inspirational to read! Pen love~

Read poems by Ahavati
Re. Sacred Contracts XXIII: The Nature of Strays
whale
4th Apr 2016 7:52am
Every word wrought with truth my sister

Let's these scraps sustain us for this road together

You've captur"d my heart and
a piece of my soul. I will not
say more, for its been said..
been lived and thank you from
every part of my existence.

More than needed. Not alone.