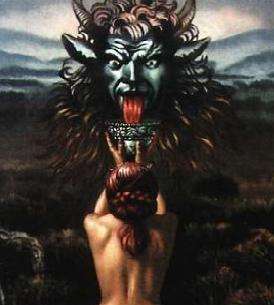 Religion is a lie
Made up for political dominance
When you’re told something all your life
You tend to believe it
Christianity isn’t even an original story
A book of plagiarism
Is it so hard to believe that we're all puppets?
Told something for complete obedience
Maybe when you can’t change something
It’s better to ignore it

Why must I pledge allegiance to the flag?
I get fighting for freedom
But why can’t I be proud of this world as a whole?
We all should be moving forward together
Why must I think one nation is better than any other?
Living in bliss is the goal of every human
Its pride that tears us apart
Religion that gives us excuses to kill
I wonder will we ever learn
Stop giving into entertaining distractions
And evolve from being so single minded

How much is enough?
I don’t know why, but it never mattered to me
All those pretty material things,
you work so hard for will one day be taken away
Maybe I learned this too soon
Because what matters to me is the love,
from people that give me unforgettable memories
Ones I hope to take to the grave
Is there an afterlife?
Well I sure hope so
I might not know what god is
But I know what he’s not

Written by DevilsChild
Published 30th Mar 2016
Like This?
Poems by Author
Comment
All writing remains the property of the author. Don't use it for any purpose without their permission.
likes 2   reading list entries 2
comments 2   reads 606

Commenting Preference:
The author is looking for friendly feedback.
Re. Blasphemy
thepositivelydark
- Edited 1st Apr 2016 8:14am
1st Apr 2016 8:13am
"I have no problem with practicing ones belief
But when forcing those beliefs on others
It becomes not an act of faith
But one of fear of being wrong"

Wonderful write! Ah, the emotions this poem brought out from me. Especially these ^^ lines. I have been accused of not having a God because I have bipolar disorder and, well, I am a little religious, like most of my countrymen are. That pissed me off. The issue? I'm catholic, they're not, according to them they're holier. Awesome right? Damn, DevilsChild, not only do you bring out the shivers, you bring out the fire!

Re: Re. Blasphemy
DevilsChild
1st Apr 2016 10:24am
Sorry to hear about the bipolar disorder. I know that’s a hard thing to deal with.
I know what you mean with people thinking they’re holier. I have friends who are very religious, and friends who are atheist. Both kind of look down on me because I believe in a god just not a religion.
Thanks for all the kind words btw ^^