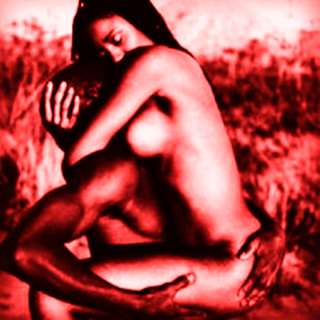 I’ve since banqueted this restless edge of mine.
It artlessly emerge when carpet burns don’t sanction
scuffed intentions from his grind.
I want it raw enough to lecture me in licks,
teach me in thick inches of yen
where my throat trained itself to swallow
the windfall of his warm absolution.
Eyes sought a motif in my crave
grasping at whatever I could,
to catapult the exact force that enables him
to inscribe archaic friction in primitive script
on the bones of my hips.
Enter me deep enough~
where lust’s prints left stroke imprints
of his phallus impression…
branding my born-again womb
with his name in taboo confessions.
Never soliciting the solace of another
with chains of my conceited-liberty
drenched and draped around his shaft.
I wanted napalm lovin’ so intense that
his strength,
his will,
his desire, could grip my waist…
propelling me to mount him airborne,
grinding in a stance where the foundation of
passion’s fortress….rest in his legs.
Covetous hands cradling his neck,
legs cradling his back.
Raw romance gave way to intense movement
with slippery tension, causing ricocheted thrusts
that produced sounds of lubricated madness,
each time I squeezed on his....
throb’s redemption.
I wanted it raw enough to quench this restless edge of mine.
The one that emerge when carpet burns don’t sanction
scuffed intentions from his grind.

Written by rain1courtel (RainC)
Published 22nd Feb 2016 | Edited 1st Apr 2016
Like This?
Poems by Author
Comment
All writing remains the property of the author. Don't use it for any purpose without their permission.
likes 28   reading list entries 8
comments 46   reads 2128

Commenting Preference:
The author has chosen not to accept new comments at this time.
Re. Raw Edge
DeanD
22nd Feb 2016 10:14pm
this blew me away, passion painted perfectly in this poem and this line :"Never soliciting the solace of another /with chains of my conceited-liberty /drenched and draped around his shaft." my eyes almost rolled out my head, "that produced sounds of lubricated madness", raw edge huh?, gone be feeling the heat from this for a while, i would say more but the blood in my brain left, ... Godd.e..s...s....

Re: Re. Raw Edge
rain1courtel (RainC)
24th Feb 2016 4:35am
Love when eyes roll and head gently falls back; an intense moment of ‘feel good’. ;)
Yeah, those sounds of lubricated madness piercing the air, always has me spent and hanging over the climactic cliff of no return.  Love your energy Dean, thanks luv…(Adore you for taking her home)

Re: Re. Raw Edge
rain1courtel (RainC)
- Edited 24th Feb 2016 4:38am
24th Feb 2016 4:37am
Tor, lawd dude, you’ve been missed around these parts. Happy to feel your vibe on my page! I’m sure you know how to give a tutorial on scuffed intentions. ;) Those that can burn away carpet burns with a fire so intense it would singe the lining of my soaked-sanctuary….Thanks for the visit hon…

Miss Rain, Miss Rain. . .If I were a man this would unarguably become the death of me; but since I'm a woman, I'm forced to envy the erotique's of your sensual ink. . .Beautiful & Boundless your pieces always seem to leave me. . .~xo, Devlin.

Re: Re. Raw Edge
rain1courtel (RainC)
24th Feb 2016 4:40am
"If I were a man this would unarguably become the death of me” <--- and wouldn’t it be the flawless way to go?! To die satisfied and with a smile on your face; an orgasmic feeling to last an eternity-literally ;)  Thank you my sensual dark beauty....xo

Read poems by rain1courtel
Re. Raw Edge
goldenmyst
23rd Feb 2016 1:56am
Rain this took me in deep. I felt the wild grind so hot is made me want what you describe and according to the woman's dictates. This is outstanding. Your poetic mind sizzles with raw sexual power.

Re: Re. Raw Edge
rain1courtel (RainC)
24th Feb 2016 4:41am
John, we women want what you men want, we need what you men need. Some of us just have an unrestrained and endless crave. ;) I love that you found time to look under my page’s skirt and see she isn’t wearing any panties….(honored she’s going home with ya) Thank you luv....

Read poems by rain1courtel
Re: Re. Raw Edge
goldenmyst
11th Mar 2016 2:00am
You have taught me the elemental nature of male and female desire. Indeed, we want the same thing. And I'm most pleased to have seen your pantiless page. She has a home in my poet's heart. Thank you honey.

Re. Raw Edge
hungrypan74 (Dantalyon)
23rd Feb 2016 2:00am
Wow RainC, reading this was like
running outside during a downpour
and feeling the weight of it falling down
on and thoroughly saturating inch of
your body... from the external covering
of skin and into the internal through the
pours.

It was so full of passion and conviction;
amazement and overwhelming emotion.

It's an spell-binding story that'd have to
be read over and over again just to take
it all in.

"Eyes sought a motif in my crave
grasping at whatever I could,
to catapult the exact force that enables him
to inscribe archaic friction in primitive script
on the bones of my hips."

These lines were akin to reading Ancient Sanskrit
and being blown away at the imagery that they
evoked.

Re: Re. Raw Edge
rain1courtel (RainC)
- Edited 24th Feb 2016 4:44am
24th Feb 2016 4:43am
Pan, what can I say?! My main objective is to drench you in the essence of ‘rain’. Soak your mind with lascivious images, saturate your skin with written words that bring forth hard-ons or tingling slits, and if at first I don’t succeed, I shall try, try, try again. ;) Thank you for the amazing and well worded commentary… just lovely hon….

Read poems by rain1courtel
Re. Raw Edge
Poeticsincebirth (Carlos)
23rd Feb 2016 2:59am
I am really loving the rhythm of your words.

Hello Psb, happy you stopped by to show a little ink-love. Love that your eyes rested my way, feeling the rhythm of my words, as my hips sway poetically. Appreciate you….

Read poems by rain1courtel
Re. Raw Edge
SatansSperm
23rd Feb 2016 3:07am
like a power grinder to a cream filled sponge cake....till all that is left is the mess....i must say savage lust is my favorite kind....loved it :)

Re: Re. Raw Edge
rain1courtel (RainC)
24th Feb 2016 4:49am
I chuckled at your comment for some strange reason SS, but truthfully, it’s pretty damn accurate in description. Lol… “like a power grinder to a cream filled sponge cake....till all that is left is the mess”  <---- umm, pretty much! ;) Thank you for passing through…

I knew I loved you....
but now I love you even more.
My mind is filled and racing with
so many vivid images. So detailed
this write is..loved the details of...

Re: Re. Raw Edge
rain1courtel (RainC)
24th Feb 2016 4:57am
Wow! Im just gonna’ sit here and bask in this beautiful comment. My lawd Keith, what can I say to this, beside- I luv ya back!?! FYI: Never ever, ever,- want the chance to enter a woman’s mind; she will contaminate you, FOREVER!!! Lol…. Seriously though, I think I wanted to pose the question that when a woman wants it raw, exactly what does that mean? Well in this instance, this particular ink, she wants it mentally raw, compromised normalcy, and give her ‘exotic’ aggressively. Stay rooted in romance so that the experience is spiritually influenced, yet able to find the perfect balance in concrete roughness while staying soft and away from the savage fucking.  I'm sure you know there’s an art to blending the two…. ;)Thank you so much for the amazing comment luv... ( and for finding room for her on your cyber bookshelf.)

Read poems by rain1courtel
Re. Raw Edge
Poetryman
23rd Feb 2016 4:40am
Damn Rain, every inch of this is loaded with sexy hot imagery...! If cloning were legal, I would steal a sample of your cells to make my very own Storm Cloud and learn the rain dance of the native peoples so that I could be drenched in the wetness of your hurricane... alas, all I can do is dream of leaving an impression on you!
JJ

Re: Re. Raw Edge
rain1courtel (RainC)
24th Feb 2016 10:12pm
JJ, every time you come over and inhale the scent of my wet verbiage, I become sated in unseen creases that open up like a budding rose amethyst, dripping smiles for only you. ;) Thank you for everything you give to me and my craft! #hugs

Read poems by rain1courtel
Re: Re. Raw Edge
Poetryman
25th Feb 2016 3:30am
Hey, you're not supposed to outdo me in the comments section, lololol...
jj

Read poems by rain1courtel
Re. Raw Edge
notenough
- Edited 23rd Feb 2016 6:03am
23rd Feb 2016 6:01am
Rain,
Skillfully written and filled with so many vivid images.. Truly a work of art. Rich language that sets a mood that is so sensual that escalates into a ravenous burning fire.
Very much enjoyed..
A pleasure to read.. One that leaves it's imprints upon the mind.

Re: Re. Raw Edge
rain1courtel (RainC)
- Edited 25th Feb 2016 3:15am
24th Feb 2016 10:16pm
Hi there NE! :) Welcome to the DU jungle! I feel your radiant vibe already with the many trinkets you’ve bestowed on me. Thank so much for the lyrical support. I will be window shopping in your poetic store real soon. A pleasure to meet you, and (thanks for adding my words to your cyber book library.)  :)

Mmm...metaphorically speaking, of course. Heh. I've somewhat to sell you should you believe that last... ;-p

Tis an excellent thing indeed that you and your torch of a pen are at some distance, luv, for were you near... ;-*

Such an exquisite mind you have, luv ~ myriad facets of glowing intellect and gleaming depths shimmering and shifting.

These glimpses into the heart of you are stunning, shattering, sweetly profound... :-*

Read poems by rain1courtel
Re. Raw Edge
Anonymous
23rd Feb 2016 8:52am
the raw intensity of this
burns through the screen..
you've definitely taken
the erotica genre to some
next level type shit Rain!!!
my kind o' grind indeed!!

Read poems by rain1courtel
Re. Raw Edge
blocat
23rd Feb 2016 10:13am
Wow Rain raw indeed I feel I've got carpet burns on my knees just from reading this. So "edgy" such wild passion as to leave me breathless. Proud to know your pen!

Re: Re. Raw Edge
rain1courtel (RainC)
24th Feb 2016 10:33pm
Lmao @ you receiving carpet burns from *reading comprehension.* Thank you Tony! It’s a privilege to share my lyrical expressions with you darlin’. ;)

Re: Re. Raw Edge
rain1courtel (RainC)
24th Feb 2016 10:34pm
Yeah, I’ve noticed this stage of my life produces a pattern of thirst that I can’t seem to feed fast enough… :)
Happy to feel your presence up against my page's skin, Ted!

Re: Re. Raw Edge
rain1courtel (RainC)
25th Feb 2016 3:18am
That's an incredibly humbling thing to say, je! Thank you my talented and beautiful poetess...  xo

Read poems by rain1courtel
Re. Raw Edge
feenixfiles
26th Feb 2016 4:08pm
Loved the last lines - you stain so simply with sentences that scar! May words always will you to write and inspire...( you know the drill) curtsy bow high five!

Read poems by rain1courtel
Re: Re. Raw Edge
feenixfiles
4th Mar 2016 4:27pm
sigh ... this is why I am here...  surrounded by souls that make me feel normal, love it!
smile grin sigh jump twirl do a little dance jump catch a high five.

Refreshing to see a new face knocking at my front door. :) I thank you C, for the compliment and read.
Appreciate the following; will ck you out soon…