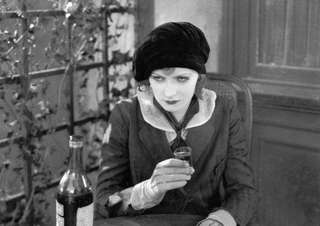 
perhaps it was Paris, or Madrid. it was a café, he thinks;
a bistro with no other diners. if there was a crowd, they
were soundless & spectral.

he was sober, for a change, or only slightly drunk. it was
late at night, of course, & there was a moon. or else there
was not. he remembers none of the details. he only
remembers her.

was she a baroness? or a courtesan? surely a woman of
the arts. or simply a girl of the streets. she was herself a
work of art: rare as a Claudel or a Rodin. quietly spectacular
in her ordinary clothes. she seemed pensive, forlorn, yet she
radiated desire. his desire.

he was not the type to approach a lady, his shyness held him
at bay. also his features: he had been scarred in the war, &
considered himself too unremarkable to be regarded by a
woman, even if she was ‘looking.’

but her beauty, her fascination, would not let him refrain. his
feeble courage delivered him to her chair. after some mute,
awkward moments, he explained that he wasn’t a madman.
he only wanted to share a table with her, a drink, gentle words
to pass the time. money, if she needed it.

she told him to sit then, & call for the wine, a meal too. & the
words did not have to be so gentle. & so it was good for him,
comforting. the wine was bracing, & she – she was a dream in
the flesh of a woman.

the evening accelerated, as it does when a man wants time to pause.
they walked along the banks of the river that ran through the city. on
a park bench, he kissed her; kissed her as if she would fade away if
he stopped.

in his room, they engaged in a sexual passion as a man makes when
he loves a woman. when he believes, truly, that she loves him. there
was no song for it, nor symphony, nor moon or stars in the sky. only
his grateful heart, surrendered to her…

…the sun blazing through the window woke him, to find her gone.
there was no note nor any trace of her, but a lingering scent. & so his
quest began, to retrieve her from whatever had drawn her away.
days grew long & dark, & weeks, & the tears grew more blinding. he
did not drink for days, then he drank too much. every door he passed
through was empty, every woman he peered at with pleading eyes
was not her.

when hope had nearly choked on its own wings, he spied her. it was a
distant café, she unescorted at a table, ever as beautiful. but there was
no recognition in her eyes when he confronted her. did she not remember
their first night –  their love –  their joy & the ache of it?

she chooses her words carefully, to slay a lover, as he stands alone:

Written by JohnFeddeler
Published 27th Jan 2016
Like This?
Poems by Author
Comment
All writing remains the property of the author. Don't use it for any purpose without their permission.
likes 18   reading list entries 3
comments 21   reads 1359

Commenting Preference:
The author encourages honest critique.
Re. stand alone
rain1courtel (RainC)
27th Jan 2016 4:32am
John, I’ve always been impressed with your descriptive skills.  Images seem to jump off the screen whenever I read you. You place the reader in the midst of your thoughts, allowing us to inhale your poetic mind. A wonderful read sir......

Re. stand alone
Ahavati
27th Jan 2016 10:41am
The last line of any poem or story does one of two things; it slays the heart like the ending of a good book, or makes you wish you hadn't bothered. This is the former. Excellent, John.

Re. stand alone
ImperfectedStone (The Gardener)
27th Jan 2016 1:12pm
Fantastic. I love the last line, you gave this one air to breathe and long lines for it to grow into. I really enjoyed this one from start to finish. Ever and always impressed.

Re. stand alone
blocat
27th Jan 2016 3:40pm
A spellbinding piece John I was completely captivated by this ink. Well done my skillful friend.

Re. stand alone
AnnaKissedMe
27th Jan 2016 8:14pm
Masterfully built up to that kicker of a last line delivering both climax and anti-climax in five short words.

Re. stand alone
case28 (Alexander Case)
27th Jan 2016 9:35pm
Outstanding story telling, Mr Feddeler.  Even though I could sense what was coming, the final scene and the last line was totally satisfying.

Re. stand alone
blue_angel
27th Jan 2016 10:18pm
"& she – she was a dream in
the flesh of a woman."   -- Eh, the harshness of such realities... those eyes tell the depth, but haunt with such hardness. He held all that made her special in his heart,,, and that burns me to the core. You make us feel, John, and that's priceless rendering! Always in awe,,, blue angel xoxo

Re. stand alone
crowfly
28th Jan 2016 10:50pm
Always heartbreaking for a fine man to be lumped together with the rest.  Her loss, John.  You'll find someone worthy of an errant knight.

Re. stand alone
_shadoe_ (katyusha)
30th Jan 2016 1:04pm
its a bit like a chandelier crashing down in a crowded room...
... you know you shouldn't be swinging from it, but who could resist
loved this, mister
xo

Re. stand alone
poeticDesire
31st Jan 2016 11:38pm
always enjoy the vivid detail and raw emotions you pour into your scribes..this was like a good shot of whiskey,has a satisfying burn..loved the ending..enjoyed as always!!!

Re. stand alone
JustAnotherPoet
25th Feb 2016 5:26am
Wow. This is one of the best stories ive read. SO much deeper than a poem, every moment makes you want to lead to the next. Brilliant my friend.

Re. stand alone
JustAnotherPoet
25th Feb 2016 5:30am
Wow. This is one of the best stories ive read. SO much deeper than a poem, every moment makes you want to lead to the next. Brilliant my friend.