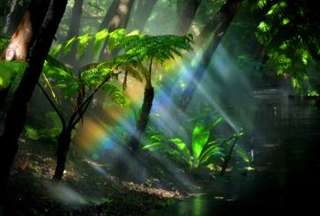 The Rainbow of The Loa

A Blessed Miracle in Three Acts

Act One: The Dance

Walking through the jungle one day, in tune with nature's soul,
I chanced upon a clearing, where people danced without control.
Like children all in a circle, beneath the towering cypress trees...
The children of the Loa, swayed with the warm summer breeze.
Singing songs of great antiquity to the spirits of old mama earth,
They heaped about them her blessings, celebrating life and birth!
I felt the spirits upon their backs, like horsemen riding the wind...
And there was peace in that clearing, for no gods did they offend.
Soon the rain began to pour, but still the dance continued long...
For the sky's tears were gentle and cool, nothing feeling wrong.

Have you seen the way children play, the innocence in their eyes,
The way they look upon the entire world, the forest and the skies?
So did those who danced that day appear to all who did behold...
The awakening of the rain to their song, like a prophecy foretold.
In the glistening glow of the sun, through the raindrops' curtain...
I swore that I could see the spirits, whose light was ever certain!
They danced with the dragonflies, whose wings hummed in time,
With the song of the Loa, that the children put into sacred rhyme.
And mama earth, she heard that song and I could feel her smile...
As all her creatures, great and small, remained happy for a while.

In harmony with mama earth, the children called her every name,
Their eyes filled with her love, lit up by the light of her living flame.
What miracle could people ask, who see delight in every moment?
I stayed to watch this spectacle, spellbound by its' enchantment.
Suddenly, the rain did cease whilst quiet was all the world below,
As from the canopy of the trees, descended the colorful rainbow.
I felt such peace at seeing this, as cannot be described too well,
For nature held the magic, and the celebration itself was a spell!
The Loa were the spirits I had seen, who came to bless the land,
Because their children loved them, not because of any command.

Written by Kou_Indigo (Kara Lucielle Pythiana)
Published 25th Jan 2016
Like This?
Poems by Author
Comment
All writing remains the property of the author. Don't use it for any purpose without their permission.
likes 4   reading list entries 1
comments 6   reads 568

Commenting Preference:
The author encourages honest critique.
Re. The Rainbow of The Loa
Ahavati
25th Jan 2016 4:15pm
Beautifully written and formatted, Kara. I can't decide which act pulls me in because one is incomplete without the other. Thank you for sharing.

Re: Re. The Rainbow of The Loa
Kou_Indigo (Kara Lucielle Pythiana)
26th Jan 2016 6:02am
Seeing how much you enjoyed this poem of mine makes me smile very much... I am glad you enjoyed giving it a read! Indeed, each act is designed to flow together with a certain harmony so that just one would be incomplete apart from the rest. Like the lyrics of a song or the notes of a melody in that way, it carries on from beginning to end in just the right way. It was my pleasure to share this, my friend! :)

Read poems by Kou_Indigo
Re. The Rainbow of The Loa
Grace (Idryad)
25th Jan 2016 4:50pm
I love this write Kara dear. You evoked so much imagery of nature. It's like a montage of colourful photographs.

Re: Re. The Rainbow of The Loa
Kou_Indigo (Kara Lucielle Pythiana)
26th Jan 2016 6:08am
It does have that sort of vibrancy to it, dear Grace! In addition to a certain harmonious flow, it contains a great deal of natural beauty as well as supernatural energy... which all lends to it a loveliness that is certain to draw the reader in and keep them interested. I am pleased that you loved it, and I am very happy as always to read your lovely comment! :)

Read poems by Kou_Indigo
Re. The Rainbow of The Loa
zoeygirl
13th Feb 2016 8:54am
truly a beautiful poem wonderfully written

Re: Re. The Rainbow of The Loa
Kou_Indigo (Kara Lucielle Pythiana)
14th Feb 2016 7:26am
It is a poem brimming with beauty and power, dear Zoey, and I am happy to see that you were spellbound by its' enchantments. :)