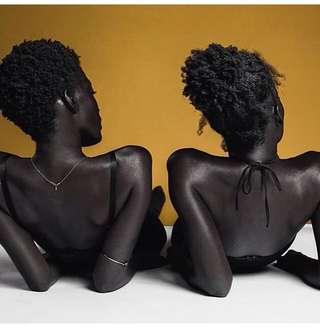 His were the non-hue men -
The ones venturing from sea to sea.
Drifting, sailing sauced into it for a fee, they with their mandates
afforded the destroying of families. These maritime calamities
boundless was their impetus for each far off shore; where
for sure God willing, nothing but score.
They, who enslaved were now here to explore
with powder in their guns and with their mighty roar, promising
none, not a one was to impede their tour.

But firstly, this Captain speaking to his staff; him ordering,
“Give me one, then one more and plump be they ass. Aye, one plus
one of the... female stock. These heathens are to learn of an earnest cock.
Once I’ve fed them and bed them then, it’s onto the next
where for certain they’ll witness their world’s not complex”

So, with that...Later on appeared a pair regal in look,
Which was supposedly implausible per The Captain's Good Book
Yet their bodies were amazing, a sight never seen.
It’s as if these heathens had fell from a dream. Their eyes, were succulent; they
were pools of delight. Their fullness of hips, they’d tease the whole night.
Up until now he’d only imagined this scene. Privy only to wives tales of these
African Queens.

Yet, him taken aback didn’t surprise them at all. It was often the
case before a non-hue men’s fall. They motioned to the Captain; let’s
make comfortable this place. So, they stripped him down whereas
he helped without haste. Pepper, straddled his groin. Salt sat on his face.
For certain to achieve pleasure is to set the right pace

They were well poised, made very little noise. The crew unperturbed and
not-a-one was disturbed. Then...all of a sudden something had changed.
The Captain's mind spinning, he was feeling quite strange...His vocal chords?
They began to lock. While his boorish cock...it was
shoved in his mouth.

Pepper, she whispered, “Damn, such a clown”
Him thrashing about, a forced drink calmed him down
Shock, then a coma, then he bled out.
His severed cock placed again in his mouth; the twins
They agreed, “Nothing needed to shout”
Salt, smiling to Pepper, “Think it’s best we roll out”
Then, both miraculously turned into a fog

-Figuratively speaking, “They got “High On a Hog”

Written by kriticool
Published 23rd Dec 2015
Like This?
Poems by Author
Comment
All writing remains the property of the author. Don't use it for any purpose without their permission.
likes 1   reading list entries 0
comments 0   reads 522
Commenting Preference:
The author encourages honest critique.