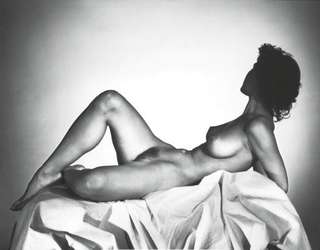 the moon hid briefly behind stagnant clouds, then emerged,
anxious to see what new drama the night would foretell.

it was a hot night, too hot for clothes. she moved around her
flat naked, letting the stale air caress her torrid flesh. she
was a mercenary in the legion of the lost, & the streets
where she sold herself were love’s battlefield.

she twirled a pair of tasseled AK-47s when she toe-danced in
my dreams like a combat ballerina. if I could steal her from
the sadness in her eyes, I’d deceive my own heart.
me, just a soldier in the rain.

her bed was a pit-stop for a stream of men who bartered a few
wrinkled dollars for a pocketful of regrets. a thick, furious cock
between her legs was only a way to tick off the lonely minutes
of her desolation, because a trick is not a lover.

every sordid novel has unwritten chapters, & maybe this was
not the last of her. maybe someone loved her once, somewhere.
she’d pack a bag one day, maybe, & find that place again.

she could kiss me goodbye as if she’d miss me, & I’d write a
poem about it. but I knew for sure that any woman, even a whore,
could choke on all those maybe’s…

Written by JohnFeddeler
Published 11th Dec 2015
Like This?
Poems by Author
Comment
All writing remains the property of the author. Don't use it for any purpose without their permission.
likes 13   reading list entries 1
comments 12   reads 822

Commenting Preference:
The author encourages honest critique.
Re. blues for cutthroat orchestra
Lena-underneath
11th Dec 2015 6:41pm
Love the title John.
I heard the rain in this while reading.
You always touch my senses with your words ; )

Re. blues for cutthroat orchestra
blue_angel
12th Dec 2015 4:15am
The title is powerful, as is the poem laced in reality. Choking on maybes... Damn, you ink the pain so well!! Much enjoyed getting my fix tonight on your lines!! blue angel x

You tear at the heart you do, you do. This

if I could steal her from
the sadness in her eyes, I’d deceive my own heart.

nigh brings one to one's knees, luv.

Betimes, these days, I find it rather difficult to comment on your stunningly splendid works for they affect me so deeply. I know not why this is, only that it is so, luv. :-*

So, I come and read and clutch my heart close throughout aching unceasingly the while.

JohnFeddeler, you are a truly impressive and awe-inspiring poetic force. :-*

Re. blues for cutthroat orchestra
crimsin (Unveiling)
12th Dec 2015 5:58am
John you romantic painting seedy scenes with such a beautiful brush..

I love that you have a place in your heart for whores like me..

Re. blues for cutthroat orchestra
neo128
12th Dec 2015 7:47pm
In these days of tough love, and rough sex, this scenario seems almost nostalgic.

Vivid, raw & genuinely sentimental. . .Only a King [of noir] could paint such bourbon tear'd ink. . .~ Devlin/Doll.

Re. blues for cutthroat orchestra
whale
14th Dec 2015 7:00am
Great tale - that plays with the bits on the table as well as those left off

Re. blues for cutthroat orchestra
Ahavati
- Edited 15th Dec 2015 00:17am
14th Dec 2015 11:48pm
Some become so ingrained in a lifestyle it becomes more like a religious cult they're bound to only because there doesn't appear to be anything else. We wish for everyone to be liberated from such conditions. But, I believe, like the poor, they are among us as reminders of our own expendable lives at the whim of circumstance, and a lesson in love and compassion.

Re. blues for cutthroat orchestra
HowlingWhelms (Noire)
15th Dec 2015 5:05am
"if I could steal her from
the sadness in her eyes, I’d deceive my own heart.
me, just a soldier in the rain." ?

that's some heavy stuff my cherished,
gave me chills.. I've lost my words,
did have more to say.. but.. and but

Your'e too much darling, as we do
feel our innards can interchange to
hold such. Powerful