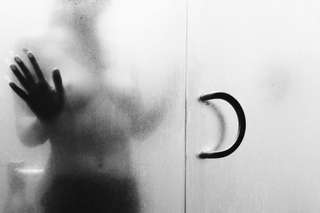 
He was a boy when we met..
Never forget his instant devotion..
He had set my heart in instant motion of loving..
Funny and goofball cute..
Fuzzy headed lil guy..
My baby brother's best friend..
Infectious...the attention from him..
He followed me around..
In his sweet eyes..
I was a fucking genius..
An actress..
A model..
I was everything as far as his annoying chatter filled flattery..
He was as constant as the crashing waves..
And then..
He started growing up..
Yes..I took advantage..
So did he, in gaze..in innocent touches, he would sit between my legs, pal around with tickles and heavenly feels..and we both tried to believe he was still my lil goofball buddy..
It had become not so innocent..
My brother and he stayed at my place all the time to sleep it off in their early..well earlies. And..
I came back to my place one night..
Had had an awful fight with a man..
And there was this..once boy..
That adored me..
That touched me and worshipped me..
On my couch..
I had been drunk..
Was not any more..
Things had  become very clear..
I wanted him so much..Loved him..
I took off my clothes and pulled him..
To the floor..
Said "Nick, make love to me please?"
He kissed my lips in a press like he belonged there..
He did.
He said "I knew you would."
I said "I knew I would too."
Nick parted my legs in such want..
Such need..
And I had always needed him in ways and ways..
He entered me with the shake of an earthquake..
He shivered in want..
Entered me with incredible destination of force...
I was wet with need..
He fucked my need like he was a virgin..
I pretended he was..

Written by calamitygin (Jennifer Michael McCurry)
Published 26th Nov 2015
Like This?
Poems by Author
Comment
All writing remains the property of the author. Don't use it for any purpose without their permission.
likes 4   reading list entries 0
comments 10   reads 758
Commenting Preference:
The author encourages honest critique.
Re. My Boy
goldenmyst
26th Nov 2015 1:14am
Oh my love this pure seduction in poetry. I felt the innocence turn hot with desire much as mine did so long ago. You weave stories of the most delightful kind. Each nuance dances in my heart with sweet abandon. ;-)

Re: Re. My Boy
calamitygin (Jennifer Michael McCurry)
26th Nov 2015 2:49am
You would appreciate this surely. Yes.. he was so special...and turned into one of my greatest loves! I so appreciate your womanly want and knowing. You are so special to me. And though you are so much more manly than so many macho acting guys i know, there is part of you that reminds me of him..how you keep that boyhood awe of woman..its so special john
You are a kindred spirit and no other is dear to me the way you are.
Love you like my god particle
Jennifer

Read poems by calamitygin
Re. My Boy
Anonymous
- Edited 26th Nov 2015 3:14am
26th Nov 2015 3:13am
Fantastic write, Jennifer! I have my memories,
as well. Speaking of memories, I lost my
cherry to my Sunday School teacher. I was
fourteen and she was probably in her thirties.
Actually, I suppose she didn't really take my
cherries, she was only oral about it. Found
out a few years later that I wasn't the only
one she corrupted that she taught in Sunday
School. You can bet I will never forget  her.

Sorry, let my own memories  get the best of
me. I thoroughly enjoyed your poem.

Re: Re. My Boy
calamitygin (Jennifer Michael McCurry)
- Edited 26th Nov 2015 3:30am
26th Nov 2015 3:25am
I can tie a cherry stem into the cross of David with my toungue...wait..what wete we talkin bout?
Lol awsome J  so cool of you to share that!
Thanks sweetheart
Always
Jennifer

Re: Re. My Boy
calamitygin (Jennifer Michael McCurry)
26th Nov 2015 9:32am
Hi Miss Looky..thanks so very much! Its a personal piece..and about time i wrote it..happy you were here to share it with!
Love
Jennifer

Read poems by calamitygin
Re. My Boy
blocat
26th Nov 2015 9:31am
I liked this naughty write what a deliciously dirty little devil you are Jennifer. I luv's yah hun!

Re: Re. My Boy
calamitygin (Jennifer Michael McCurry)
26th Nov 2015 9:41am
Oh you Kitty, you would just have me spread and and talkin filthy all time...lmbo..
Luvs and hugs back#
Jenny gal