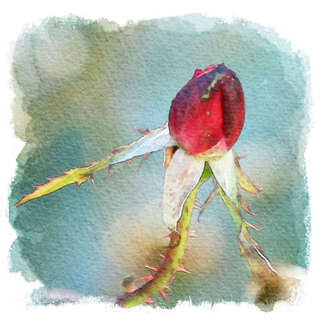 I've always kept a flower on my desk, a
daisy or perhaps aster from the roadside.
It kept me close to nature during work.

One morning I chose a perfect rose bud.
She sat for a week but never bloomed.
After two I knew she never would.

I didn't throw her out. Maybe I felt guilty
for plucking her before she opened up.
After three her head became a crook.

She seemed in perpetual prayer, an
eternal vigil over a lover’s cemetery plot
some forlorn secret buried too soon.

After a month I entertained dumping her.
After six weeks I inadvertently bumped her
with a folder. She landed with a thump.

Stunned by the sound, I discovered she
had petrified, was stone-like in resolve.
She became a permanent paperweight.

During late nights when I couldn't sleep
I would meditate over her constantly
her presence an anatomical mystery.

In the deepest hour of the coldest Winter
of my Life I picked her up. Examined her
hardened exterior like an ancient fossil.

"What is her essence?" rose up within me.
I thought, "Beauty". But she had shriveled
in brilliance, was hardened by rigor mortis.

Lack of sunlight, too much rain, or, perhaps
by a late waltz against the cold skin of fog. It
didn’t matter; I could not answer so let it go.

"What is her essence?" came the specter
for weeks. But the answer wouldn't manifest.
One night, words formed around the space.

"Invert her and tell me what you see." I was
amazed to see her become a human heart
with an understanding that absorbed into me.

People, too, become hardened by elements:
Fear. Betrayal. Loss. Loneliness. Pain. But,
their essence is the same. “What is it?”

"Love" I answered, without any hesitation
or doubt. Despite how hardened people
become, their essence will always be Love.

Turning her back over, she became, once again,
a bud. “What is her essence?” echoed... In the
year I’d had her, one thing had never occurred.

I pressed her to my nose and deeply inhaled. Her
aroma was as strong as if Life had opened her up,
and survived long after she'd given up the ghost.

Because, you see, some things will never be lost
to the grave despite how hardened they become.
Sacred Contracts retain their essence within us.

Written by Ahavati
Published 16th Oct 2015
Like This?
Poems by Author
Comment
All writing remains the property of the author. Don't use it for any purpose without their permission.
likes 16   reading list entries 5
comments 10   reads 930

Commenting Preference:
The author is looking for friendly feedback.
Re. Sacred Contracts V: Retention
JohnFeddeler
16th Oct 2015 7:06am
'behold my beauty' said the rose. she retained it & maintained it within,
& reigned well beyond her lifespan...

Re. Sacred Contracts V: Retention
edead
16th Oct 2015 12:37pm
This is so beautiful and thoughtful.

Re. Sacred Contracts V: Retention
Miss_Sub (- Missy -)
16th Oct 2015 3:29pm
Aside from being very well written, this simply reminds me of my place in the world, and that's a moment of peace I will enjoy for the rest of the day.

Thank you for the read.

Re. Sacred Contracts V: Retention
shakka (shauna)
17th Oct 2015 2:59am
Hello AhavatiAngel: Only you could write/see/feel such a wise and lovely poem...that speaks upon the human condition. "Despite how hardened people become, their essence will always be love". Yes. The core of us [humans] always  love. Deeply abiding, surviving, love, even if often this love is not
fully realized [scares me to even write this bc I do not want this to happen to me]. "Sacred contracts retain their essence within us. True. Inner strength
is beauty.  Thank you Ahavati, for you and your life-affirming poetry.   Shauna

Re. Sacred Contracts V: Retention
Chiyo (Miss Chi)
19th Oct 2015 9:42pm
This poem is so beautiful. Loved the rose's development and with it the depth of thought.
Like it a lot!

Re. Sacred Contracts V: Retention
Suoaei
9th Nov 2015 5:37am
"Turning her back over, she became, once again,
a bud."
This poem made me cry. Thank you for touching my heart tonight.

Re. Sacred Contracts V: Retention
JohnnyBlaze
10th May 2018 5:40pm
This was pure poetry from beginning to end.

And excuse my French, but

"Lack of sunlight, too much rain, or, perhaps
by a late waltz against the cold skin of fog. It"