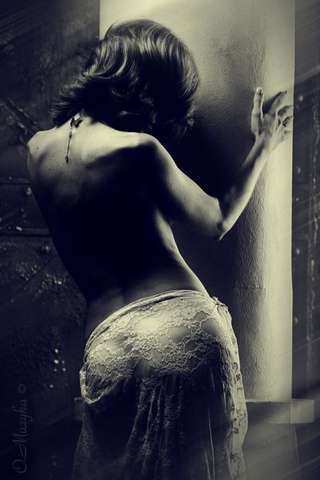 Bogart had Bergman, who would’ve given up her husband &
the fate of the free world to run away with him, in the desert
heat of Casablanca.

a cynical detective with a drinking habit scored the affections
of a high-class lady when he booked her for murder; a lady
named Laura.

a gambler with a permanent scowl tortured the emotions of
a tempestuous redhead, called her a tramp, & still she clung
to him on her knees, staining her expensive gown with her
tears. they called her Gilda.

I could bust outa this film noir vertigo that I’m tangled in,
maybe, if I could make a woman love me like that. sure,
it would be my reprieve from these late night saloons,
spilling old whiskey & scripting cheap romance lyrics on
pretty paper napkins.

she’d look good in little cocktail dresses off the rack, bomber
jackets & combat boots from Army surplus, & even better in
nothing at all. she’d read to me from the letters in Penthouse,
sing sultry French tunes in the shower, & purr when I slapped her.

slither like a snake under the sheets, plant herself just right on
her elbows & knees, having learned from mistakes with her old
boyfriends. I’d have to take my time loving her, & maybe I’d cut
down on my whoring.

but I’d kiss her deep every day & smack her fine ass, tell her
her eyes bothered me as much as I could stand, so she’d know
she was hardcore & beautiful; she’d know she was royal.

she’s the girl I dream in Caravaggio visions, when I’m drunk or
stoned; a regular, common woman, graceful as the sea & wild
as the wind, & she’d need more love than I could ever give her…

Written by JohnFeddeler
Published 24th Sep 2015
Like This?
Poems by Author
Comment
All writing remains the property of the author. Don't use it for any purpose without their permission.
likes 20   reading list entries 5
comments 18   reads 1053

Commenting Preference:
The author encourages honest critique.
Re. torch song liebestraum
crimsin (Unveiling)
24th Sep 2015 7:40pm
so seductive is your ink John I get lost in creamy delight tucked amongst your lines..

Re. torch song liebestraum
harliequin
24th Sep 2015 9:10pm
I hope, one day, you find a girl who needs just the right amount of love you can give her...and that you learn to love enough to give her what she deserves. <3

Re. torch song liebestraum
drunkenplaywords
24th Sep 2015 9:23pm
"but I’d kiss her deep every day & smack her fine ass". That is love in my opinion. Love the old to noir, especially Casablanca, one of my favorites. Excellent write, John.

Re. torch song liebestraum
Chiyo (Miss Chi)
24th Sep 2015 10:00pm
I know that a piece is written perfectly when I  loose myself between the lines, when pictures rise behind my eyes. Reading your wonderful poems provide for exactly that. Thanks, John!

Re. torch song liebestraum
crowfly
24th Sep 2015 10:06pm
Style to burn!  You sound almost wistful in your musings on smoky-eyed, dangerous women this time around.  I love your mentions of noir classics.  They just don't play 'em like that anymore.

Re. torch song liebestraum
darksighs
24th Sep 2015 10:49pm
Title alone could stand on its own as verse.. outstanding, SirJ!

"I could bust outa this film noir vertigo that I’m tangled in,"
~dark giggle here, amused plus appreciative of the elegance you've used to say it. ;)

From there, your page started to melt on heat, misters.. The raw mix of lascivious dominion
vs emotional throes & pullback gives one the inclination to poetry sigh.. then reread ;)
ever curtsy,
~d

You can never go wrong with classic art, expressionist cinematography, and timeless love.

Re. torch song liebestraum
thepositivelydark
25th Sep 2015 8:26am
Sir, your noir is more colorful and bright than this pitiful place I'm in. Thank you for your words.

Re. torch song liebestraum
_shadoe_ (katyusha)
25th Sep 2015 12:50pm
"sing sultry French tunes in the shower, & purr when I
slapped her.
slither like a snake under the sheets, plant herself just
right on
her elbows & knees, having learned from mistakes with
her old
boyfriends"
gods, i love this. seen casablanca so many times & never tire of it.... much like your poetry, mister feddeler
much enjoyed
xoxox

Re. torch song liebestraum
JAZZMANOR
27th Sep 2015 8:20am
You show yourself to be a great wordsmith with an appreciation for the movie sirens of classic film.

Re. torch song liebestraum
blocat
27th Sep 2015 11:27am
Wonderful write John containing all the 'Usual suspects' I could hear a blues sax whilst reading this! Well done mate.

Re. torch song liebestraum
seekingkate (kateA)
30th Sep 2015 1:44am
i was going to say 'well, i'm obviously not the one for you John' as i don't fit the description but then you finish with the perfect words 'a regular common woman' ...
loved the read... :)