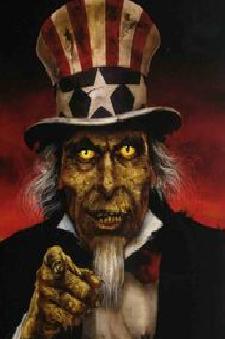 Press Of A Button (Co-written with diamonddave75)

They lie behind a puppet
Call him a leader; tell us he’s there to help the people
All to make us believe we're free thinkers
But we are all slaves to the machine
Everything we do must be looked over with approval
From our jobs down to the very way we eat
It’s all sold to us to take from the poor and give to the greedy

delegated police state
alone since birth, taxed till the day we fucking die
sell away your birthright for the american dream
calloused politics derived from dirty hands
force fed in every soup kitchen
no free handouts in the home of the brave
assume the position, while they service your life..

American dream?
More like American fantasy, with the wool over our eyes
Want us to believe every hardship is for the greater good
But when I look around and see the rich only gaining
At what point do I stop believing their lies?
Realizing we’re only cash cattle being drained till we’re led to the slaughter
By smooth talkers who are just as clueless

dysfunctional politics
republicans, and democrats, nothing more than gangs
socialist foundations, devouring us with hypocrisy
racist radicals contaminating our moral fabric
praying for eradication of the middle east, blood money
bible toting thugs, wanting the second coming
death to all mankind, unless we accept your messiah

So is it that people just don’t care?
Would they rather live life being raped?
No, truth is everyone’s scared to stand against the shadow of the colossus
Though there are still few that believe that change can be made
But there are so many doors to open and close that you’ll never get anywhere
And if you do, they treat you like a criminal

ethics are forgotten
sold to the highest bidder, freedom a grand illusion
a cog in the wheel of environmental suppression
phone taps, surveillance drones, the patriot act
slaves to the system, prisoners of war
our homeland violated with corruption
with the press of a button..

Written by DevilsChild
Published 10th Apr 2015
Like This?
Poems by Author
Comment
All writing remains the property of the author. Don't use it for any purpose without their permission.
likes 4   reading list entries 2
comments 8   reads 783

Commenting Preference:
The author is looking for friendly feedback.
Re: Press Of A Button (Co-written with diamonddave75)
Lookawaynow (Rose)
10th Apr 2015 6:18pm
Great words
great styles.
you weave well together xD
it's on my list because of its complexity of the word use
I'm impressed totally.

Read poems by DevilsChild
Re: Press Of A Button (Co-written with diamonddave75)
whitegirlunwrapped
10th Apr 2015 7:50pm
wow you guys did a great job of telling the truth. I very much liked the ending

Read poems by DevilsChild
Re: Press Of A Button (Co-written with diamonddave75)
MsRockyJackson
11th Apr 2015 1:24am
Amazing way of telling the truth about the kind of world we live in.
Loved it very much :)

Read poems by DevilsChild
Re: Press Of A Button (Co-written with diamonddave75)
stormiwyndz
11th Apr 2015 11:55am
And yet another Gem. I agree with the above and am thrilled to see a piece like this where it can be seen. This one should be published.
~Stormi~