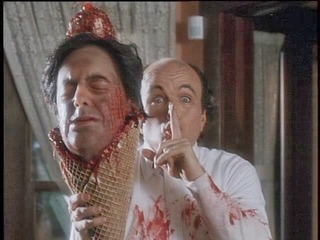 Melted ice cream and cherries there,
And there is blood everywhere!

It's so creepy and I'm pretty sure,
That it's a Waffle Cone Massacre!

It's a gory wonderland!
And it looks like bloody chocolate sand!

Putting their victims in waffle cones,
And using pecans to break their bones.

Pieces of candy to put on top,
And chocolate pearls to hide their slop.

Secret laboratories where the criminals hide,
And peach preserves lined along the road as a guide.

Slaughtering their victims and placing them like so,
Until the finishing piece is ready to show.

Putting them on a waffle cone is very hard,
Especially when there's pieces of shrapnel sticking out like shards,

Dipped in strawberry syrup and flower buds,
We let them soak in their own blood.

Beheaded corpses with a cherry on top,
We would get caught if there were cops...

Melted ice cream and cherries there,
And there is blood everywhere!

It's so creepy and I'm pretty sure,
That it's a Waffle Cone Massacre!

Written by ChemicalRose (Meguana)
Published 27th Mar 2015
Like This?
Poems by Author
Comment
All writing remains the property of the author. Don't use it for any purpose without their permission.
likes 4   reading list entries 1
comments 9   reads 737

The imagery is amazingly strong!!! Keep up the good work!!

Re: Waffle Cone Massacre
crowfly
27th Mar 2015 3:49pm
Better this than a chainsaw!  Ice cream and cherries make the gore more palatable.  I'll take this over "Saw Part Whatever" anytime.

re: Re: Waffle Cone Massacre
DeathnoteWhovian
27th Mar 2015 4:03pm
You have a point actually... There should, if there isn't already, a film like this....

re: re: Re: Waffle Cone Massacre
ChemicalRose (Meguana)
27th Mar 2015 4:30pm
My buddies and I were planning on writing a novel about this. Lol, let's try to turn it into a film!

Read poems by ChemicalRose
re: re: re: Re: Waffle Cone Massacre
DeathnoteWhovian
27th Mar 2015 4:42pm
That has to happen!!!