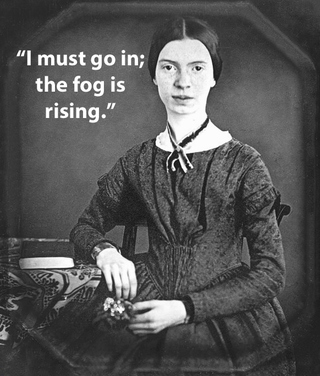 American Masterpiece. The Soul selects her own Society

It was early spring and chilly. Hot chocolate was calling as I moved in from out of the night air.  I went inside to read an assignment that coincided with a lecture, and then I settled in to start writing. After words, it seemed that prose, verses poesy, was the only thing releasing me from my mind, a mind that was in no mood for decoration; a break in the cords that create solemn.

The pages never come easy.  I thought that if I should cry and stain the page with pain and rage, then I’ll see it through until words subside as I rosined my eyes to the tune of a white oleander’s poison.  Then there is something finished; a few more pages I never knew about myself. It was exhausting, but in the end it was barely making sense, and so I withdrew for the time being.

Surprised by what I had found, I looked at what I wrote as some distant reader, perhaps, in the far away future, that when I was alive they never knew.  It’s a lonely story of a girl that looked happy for the world where nothing but the core would do to be removed as the blackness is cut away.  The center of pain is there, and it is there that lies the truth in remains. It hurts my heart sometimes, but I will not subside willfully.  And the prose ― it is only the residue of a night terror that fell from the scene inside.


I went to school today; the last stretch of the semester after Spring Break, and there is American Masterpieces, ENGL 1600. I learned about Emily Dickinson. Her poems were only numbered, never named.  It is ironic that I find her name as one synonymous with poetry.  It’s interesting that her last words spoken were: “Oh, is that all there is?”  She was talking about the water she was given at her death bed.  Perhaps it is that she wanted whiskey, or hot chocolate maybe.  I don’t know why there are some of the things we see, we see or don’t want to see.  These things just sound poetic, I guess, and wonderful for the mind to grasp at the fantasy, or to terror at something foreboding.

A famously placed line from poem 465, I heard a Fly buzz when I died, "I could not see to see".  It was significant as I wisped the fly away from my chocolate that followed me.  I guess it is that my hot chocolate will follow me forever, and the fly, as it is now a part of who I am with reverence to remembrance and the tug of a term, self-fulfilled prophecy.  My mother warned me of the ironies she knew nothing of when I was young and told me to leave them well enough alone.  Why didn’t she realize it was the one thing that I would spy at the wonder, for the rest of my waking days?  Unrested, there has been a fly as long as there has been death itself.  Hot chocolate, buttermilk, shoes, and writing perhaps was invented to entice it, and then to counteract it. My soul of woman, we should be stronger in the face of adversity that only fear has left with us.

It is not the open mind that I fear; it is the mind I fear that fears itself, in that it traps itself into such an existence.  Sometimes a mind will do anything to prove its courage, even if it’s just going to college and learning things thought out of the spectrum of knowing.  And the writing, as I sit alone with my thoughts of the past to try and make sense of it, I learn of myself.  Writing is lonely. And yet I’m not alone at all when I think of the celebrations, and remember that I can lean on the courage of those I admire and aspire towards their greatness.  I learn of myself at every turn of the page, and I embrace the life and the irony that is ever encompassing and woven throughout history; it is there to discover. It is history that I love, and tomorrow will forever be tomorrow at the ready with its unreachable certainty. Now and then, I laugh at my mother; she was ridiculous at hysterical moon tactics. But and I laugh in spite of myself the most.

Emily Dickenson:  She was well read.  She was an amazing poet, and as a woman she is a force that now flows within me as a breaking edge.  Today I found a newfound respect for her.  In fact she did own a Newfoundland; a hound, and I'm sure they were quite witty with each other.  She had a best friend that was stricken by death at a very young age, Emily wrote about it, but she was not afraid of the very nature that Life encompasses.  It is that we write about what we've come to terms with.  She valued learning, nature & science, and Ralph Waldo Emerson.  She wrote nearly 1,800 poems, where only seven were published. She was never famous in her day.  Emily Dickenson toyed with talks of publishing through correspondences of a friend, she was never sure if her words were alive enough.  She always wore white, and I think that I know the reason.  Maybe it is the reason that she’s not quite smiling in the darkened dress; it’s because there was no air conditioning. Emily loved the outdoors, and it is white that is self-cooling and reflective.  People love their talks and chit-chats over purity and its symbolisms. She lived in changing times of the Puritanism and received Emerson’s Self-Reliance and Nature, hot off the presses; she was thrilled with the freedom, even if it was in her own mind. The mind inside, this is where the key inlays to unlock the gate-keeper. The truth is amazing. There is what we see, and then there is reality.

It’s early spring, and it’s chilly outside. Some hot chocolate and Emily Dickinson sound lovely. “I must go in; the fog is rising.”  It was inspiring.  I saw myself lying beneath it in some poem I wrote yesterday, through a vision I had long ago, right before I awakened.  It is now and then, that I stand “still” and unafraid.

Still! Could themself have peeped
And seen my Brain — go round
They might as wise have lodged a Bird
For Treason — in the Pound

Written by Pishashee
Published 17th Mar 2015 | Edited 29th Jun 2016
Like This?
Poems by Author
Comment
All writing remains the property of the author. Don't use it for any purpose without their permission.
likes 6   reading list entries 1
comments 9   reads 757

re: Re: American Masterpiece. The Soul selects her own Society
Pishashee
- Edited 17th Mar 2015 9:28am
17th Mar 2015 9:27am
And her blood would run cold if she knew we were talking about her as a famous poet.  She told Lavinia to not let any of the poems through after she died.  She wanted them all burned and she meant it. I am enjoying her so much. I have so many favorite poems she wrote.  Thank you Roachmill. :)

Read poems by Pishashee
Re: American Masterpiece. The Soul selects her own Society
dartford (Paul S...)
17th Mar 2015 10:27am
a brilliant poet, a great thinker and -
over here, at least - an undervalued
writer...

re: Re: American Masterpiece. The Soul selects her own Society
Pishashee
17th Mar 2015 9:09pm
I had always heard the name, but never really knew, or appreciated the woman and her contributions to today's poetry. I never knew that she wasn't famous. She never knew she was a trailblazer.

Read poems by Pishashee
Re: American Masterpiece. The Soul selects her own Society
DevilsChild
17th Mar 2015 11:36am
I always thought of Emily Dickinson as a great poet myself.

Such a great informational write. I really love your writing Miss Pishashee ^^

re: Re: American Masterpiece. The Soul selects her own Society
Pishashee
17th Mar 2015 9:10pm
I modified it even more into a story and so I hope you enjoy it.  I really enjoy writing it. Thank you so much.  :)

Read poems by Pishashee
Re: American Masterpiece. The Soul selects her own Society
JohnFeddeler
- Edited 20th Mar 2015 00:28am
19th Mar 2015 4:29am
enjoyed the run thru her history, the times, & the wealth of her that we were granted. her oeuvre was found to be too valuable, & she was not allowed to take it to her grave.

art is so much bigger than the artist who creates it, in some cases...

Read poems by Pishashee
Re. American Masterpiece. The Soul selects her own Society
DanielChristensen (The Fire Elemental)
14th Jun 2016 6:16am
It's gorgeous. Erudite, insightful, radiates heart. I'm filled up with many feelings reading this and it hurts. Thank you.