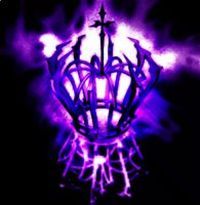 Amidst the starry climes of heavenly realms,
The light of which shines on all mortal faces…
Which star bears witness to what overwhelms,
The children of the noble and angelic races!
None can say, but in still and solitary waters,
I have seen light within the depths, reflecting…
Brought by spirits watching over the quarters,
Their elemental wills: seeking art’s perfecting.
But not in water, earth, air, or fire so divine…
Hath I beheld the glory my heart truly seeks.
Power beyond those things was always mine,
And so, I sought beyond the elemental seats!

Amongst broken tombs,
And amidst unquiet dead,
Beyond Hades’ glooms…
Past all fear and all dread,
I hath tread.

In the deep places, and dark places I went…
Seeing the shades and shadows that so dwell,
Amidst tombs and temples twisted and bent:
To suit the purpose of all the nobility of Hell!
I heard their whispers, knew their many fates,
How the passed from life unto subtler planes.
I learned much of death, and of what awaits,
Beyond the cessation of living and of pains…
Whilst: wolves and serpents, spoke wisdom.
What they taught me in no common tongues,
Gave me the power of the Infernal Kingdom.
But it couldst not show me of where I belong!

Amongst the proud Fallen,
And amidst damned souls,
Beyond lost spirits sullen…
Which no prayer consoles,
I didst go.

So oft I feel between worlds, between states,
Neither living nor dead, but something other…
And my thirst for knowledge naught so sates!
I have eclipsed any maker, father, or mother.
I am now in mine own image, recreated fully,
Yet still I seek, beyond light, beyond all dark.
Something draws me with wisdom and folly…
I hear it, whispering, and my spirit must hark.
The call of darkness, which leads me below,
Beyond the realms of no return, of the lost…
And I follow eternally, seeking ever to know.
The power is within and I have paid the cost!

Amongst mystical tomes,
And amidst magical runes,
Beyond skulls and bones…
Hidden in secretive rooms,
I went soon.

I hath shed old raiment, become what I am…
Like a serpent, wise and powerful and pure!
None can know, who so walk in mortal land,
What awaits the worthy, beyond their shore!
Far from my throne in the Netherworld deep,
I walk and teach those who seek to master…
The secrets of Hell and the dead that I keep:
Brought with me from just past the hereafter.
The path I walk is not for the weak of heart,
For to walk it, is to be forever transformed…
Every aspect of one’s being, in full or in part.
The darkness crowns me: I am so adorned!

With wand of power,
And words of pale fire,
When cometh the hour,
I achieve my desire.

Written by Kou_Indigo (Kara Lucielle Pythiana)
Published 2nd Jan 2015
Like This?
Poems by Author
Comment
All writing remains the property of the author. Don't use it for any purpose without their permission.
likes 1   reading list entries 0
comments 2   reads 486
Commenting Preference:
The author encourages honest critique.
Re: Adornment of Darkness
Nightcore14 (The Girl Who Once Lived)
2nd Jan 2015 8:25pm
Beautiful and fun to read as the picture is beautiful suiting such a lovely poem wonderfully. I enjoyed it dearly.

re: Re: Adornment of Darkness
Kou_Indigo (Kara Lucielle Pythiana)
6th Jan 2015 7:57am
I am so very pleased that you enjoyed this poem, dearest Tiger Lilly! It was a pleasure to share this with you and everyone here on DUP, sweet one. :)