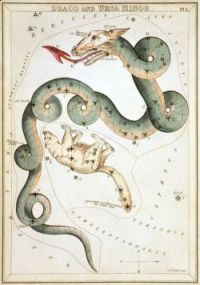 Blessed be!
Such is prophecy…

I have prepared my way, a path to set hearts free!
The hour we know the truth is our high ascendance.
This is the nature of Cosmic Duality, and humanity:
Light and dark, good and evil, in a perfect balance…
One’s Devil is another’s God, both white and black.

Some wars art spiritual, some we must wage within…
And only those with wisdom shall know this mystery:
Those who hath knowledge, not tainted by false sin…
They alone shall realize the secrets hidden by divinity.
It shall come to pass, in the midst of those dark days,
That, from the pit wherein the damned are oft burned,
The Dragon shall rise in fiery glory from the darkness...
The Dragon shall rise again; it's wings so darkening all,
As destiny cometh nigh, and time cometh full circle...
When, at long last the thousand years or so art ended,
The Serpent that was mighty before its’ most tragic fall,
The Serpent shall ascend up from out of the darkness...
The wounds the Dragon suffered shall all be mended.
When the Dragon is released from its’ darkest prison,
To walk once more amongst all of the nations of Man,
The nations at the very four corners of this sad Earth,
Many will come to obey the Serpent's every command,
Some instinctively, as though knowing well from birth,
That the Dragon is released from out its’ dark prison.
It shall be said that these people art in fact deceived,
Enchanted by some dark and ever shadowy power...
Who shall say more truly that Man hath so: conceived,
More infernal pacts, born in their own hearts’ desire!
Strong is the lure of strength and that of true power...
That Man wouldst burn itself in red Hell's eternal fire!
To blame of the Devil is such a very easy thing to do,
How often doth Man need someone else, to blame?
So difficult it is, to admit to what is much more true,
That we are all in fact: Children of the Dragon's Flame.
Gog and Magog, they prepare themselves for battle,
For the mad hour of Hell’s glory cometh fast upon ye!
Children of the Flame, prepare thyself well for battle,
For the Dragon of old itself hath so summoned thee...
The Children of the Flame art most numerous indeed,
And most mighty under the Dragon's ancient banner...
They art as numerous as art the very sands of the sea,
And as fierce as the waves that crash in their manner!
They will march up over all the breadth of this world,
To surround even the camp of Heaven's blessed saints...
And their beloved city, against it the darkness is hurled,
Against that city: cometh ever the Shadow that taints.
Though fire shall come down from out of high Heaven,
Until mortal blood doth wash away into oceans deep,
Though fire cometh like rain from out of high Heaven,
The Children of the Dragon, their pride, they will keep!
Whilst the flame itself consumes their flesh and bones,
The Children shall know not the sting of terror or fear...
For their souls will endure beyond even rocks and stones,
So upon flesh’s passing, why waste even a single tear?
The lake of fire and brimstone holds sway over but few,
For it is foolish to fear destiny's vastly inevitable hand...
It is better to die fighting for a cause that is nobly true,
Than to dwell in the false dreams of a corrupted land!
Even if the Dragon be, once more, cast into such flame,
Why say ye that it be so cruel and most black a fate?
It is nobler to die with full pride than to live in shame,
The hunger: of another's false divinity to as falsely sate.
It is better to be separated forever from such a Light,
Than to serve it with only half of one's immortal heart...
Who canst so say if the Serpent is wrong for its’ fight!
Perhaps in its’ own unusual and most mysterious way,
The Dragon hath done for God its’ more proper part,
That the future may begin with a better, brighter day.
The city I speak of is within every heart, every soul…
No physical place is it that is besieged, by darkness.
Nor is that Heaven I spoke of, too distant to know!
And the fire that cleanses poses little or no distress…
Only for those who fear change, and transformation,
And the Children of the Dragon fear it not, for truly:
My Children hath held that mysterious information…
Which enables such change to come about in dignity.
For them, the fire falls like warm milk and naught else!
Neither false doctrines nor ancient deceits canst halt,
The coming of a Kingdom beyond all earthly wealth:
A place for all, a place of neither hellish nature’s fault,
Nor heavenly tyranny’s demands, which art too high.
I spread my wings, rise from the abyss of past lives…
Looking toward a bright future beyond the night sky.
This, is for what the Dragon truly and nobly strives…
Now that the thousand years of times past art ended:
Peace everlasting, the evolution of man beyond war,
And a time when all old wounds canst be mended!
The end of an age of suffering, the beginning of more:
A New Age of betterment, a New Order of glory…
Fear not the darkness, for in it I bring my radiance.
Cast aside thy doubts, thy fears, and all thy worry!
This is a time of change, of love, and transcendence.
If I lure, it is with truth and with Serpentine Gnosis…
I need no lies to lead people unto a brighter world.
I need only the Divine Force to grant a purer bliss!
Look to the future we canst build, purer than pearl.
From flame I hath come and to flame I oft go back,
The flame of truth, the fire of a spirit divinely great!

One’s Devil is another’s God, both white and black.
Light and dark, good and evil, in a perfect balance…
That is the nature of Cosmic Duality, and humanity!
The hour we know the truth is our high ascendance.
I have prepared my way, a path to set hearts free!

Such is Prophecy…
Blessed be!

Written by Kou_Indigo (Kara Lucielle Pythiana)
Published 22nd Dec 2014
Like This?
Poems by Author
Comment
All writing remains the property of the author. Don't use it for any purpose without their permission.
likes 6   reading list entries 1
comments 10   reads 726

Commenting Preference:
The author encourages honest critique.
Re: Children of the Dragon, Children of the Flame
Grace (Idryad)
22nd Dec 2014 12:05pm
This is like a peek into end time dear Jessica. Such frightening sights spoken of and predicted. Your talent in this epic is obvious. Love the read:)

re: Re: Children of the Dragon, Children of the Flame
Kou_Indigo (Kara Lucielle Pythiana)
23rd Dec 2014 6:39am
Glad you enjoyed the read, Grace! It may be a tad on the frightening side to some, but there is light amidst the darkness within these verses and many meanings within meanings in them as well. Such peeks as this are never simple reading, but they do often make for epic and fascinating things to relate and share. I am glad to have shared this one with you, dear friend! :)

Read poems by Kou_Indigo
Re: Children of the Dragon, Children of the Flame
Anonymous
22nd Dec 2014 5:25pm
seems like a transformation of sorts,the snake shedding its skin,the weighing of scales and finding ballance in the unshed,you always shine,dear sis,be it in the light,be it in the dark....spooky,right after thunder began outside...

re: Re: Children of the Dragon, Children of the Flame
Kou_Indigo (Kara Lucielle Pythiana)
23rd Dec 2014 6:46am
Very perceptive, big sister! You’ve caught a glimpse of one of the more subtle meanings hidden within the poem, that one involving spiritual evolution and transformation. As I said, there are many meanings, as I oft add into my poetry, and be it in light or dark I do… as you wisely noted… always bring the light. Interesting coincidence about the thunder! Talk about powerful verse. *Wink* Very happy you enjoyed giving this a read! :)

Read poems by Kou_Indigo
Re: Children of the Dragon, Children of the Flame
EM20XX (Just a Puppet)
23rd Dec 2014 1:11pm
Your reads are always a hell of a read. They always are so well written :-) thanks for share

re: Re: Children of the Dragon, Children of the Flame
Kou_Indigo (Kara Lucielle Pythiana)
25th Dec 2014 6:42am
Very happy to see you enjoy them! Your enjoyment of my writings makes it that much more rewarding when I share them. I am always pleased to share my works with you and everyone here on DUP! :)

Read poems by Kou_Indigo
Re: Children of the Dragon, Children of the Flame
toniscales (Lost Girl)
24th Dec 2014 5:37pm
Enjoyed your writing and artwork. You are multi-talented! Will read / view on.

re: Re: Children of the Dragon, Children of the Flame
Kou_Indigo (Kara Lucielle Pythiana)
25th Dec 2014 6:44am
So happy you like my works! And thanks for the high praise as well, it is most definitely appreciated. Your enjoyment of them is a delight to my creative spirit! :)

Read poems by Kou_Indigo
Re: Children of the Dragon, Children of the Flame
druidicheirophant (AVARIS DEMALO)
29th Dec 2014 7:01pm
Infernal pacts, blaming the Devil, magogians, dragon races, speaks to the Cain in my veins indeed.  I glimpse a good ancestral connection not many have in terms of the dark origins and the hidden antiquities of humanity.

re: Re: Children of the Dragon, Children of the Flame
Kou_Indigo (Kara Lucielle Pythiana)
2nd Jan 2015 8:04am
You glimpse well, my friend! And you see into many of the deep and hidden aspects of the secrets that this poem holds. You've a good eye for such poetry and such things, I've noticed! Very glad you liked the read. :)