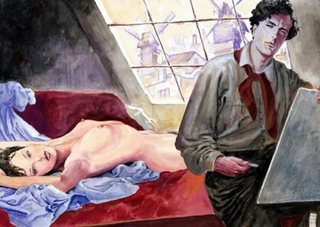 how the artist paints love


he had found her in the village. she was a street vendor, selling
flowers, and he persuaded her to pose for him.

she was aware of her own beauty; proud & comfortable in her body.
it was a gift that should be shared, & therefore she had no shyness
about posing nude.

her heart had been broken by a soldier who went to war & never
returned. as an artist, he would fight that battle for her. his palette
would be his shield; his brushes, of various sizes & textures, were
his arrows, daggers, & sabres. his oils would become banners of
victory, & peace.

days stretched into weeks. she did not cover herself when they took
breaks for pastries, figs, & wine. he was thusly blessed with her naked
enchantment during their encounters, & it lingered each night in his dreams.

one day she revealed that this would be her last session. she & her
lover were moving to the city that very evening. he paid her, & she
left for the final time.

he paid her, & he felt ashamed. as if he had betrayed his honor. as if
he had paid a prostitute.

in that moment, he had an epiphany. she, the model, was merely a
tool, a device of inspiration by which he had created his work of art:
the art of love.

and she whom he loved, the mistress of his earthly passion, the queen
of his soul, was enshrined on canvas, in the brilliant colors of his labor.
she was captured there, in all of her beauty, all of her youth, for eternity.

his heart was her heart, and she would never desert him.

Written by JohnFeddeler
Published 16th Nov 2014
Like This?
Poems by Author
Comment
All writing remains the property of the author. Don't use it for any purpose without their permission.
likes 23   reading list entries 7
comments 18   reads 1198

Commenting Preference:
The author encourages honest critique.
Re: how the artist paints love
crowfly
16th Nov 2014 1:54am
This is bittersweet in the best way. The artist has a vision, one that no model - or anyone else -
can fill.  It's an impossibility.  He sits looking at his canvas and finally realizes that his ideal is in his own mind and, once he accepts that, finds peace.  It certainly helps that he has the talent to project it in his art and give it at least some degree of physical substance, something he can gaze at when he's too exhausted or whatever to drag it out of his mind.  It's right there on his wall.  And it's right there in his soul.

Re: how the artist paints love
thepositivelydark
16th Nov 2014 3:46am
Oh, your words have brought me to realizations about the green-eyed man who still haunts my dreams. I know that those dreams won't stop for a while but now, I think they will not be as painful as before... Thank you, Mr. Feddeler, your words have helped this young and admittedly quite naive girl.

Re: how the artist paints love
Anonymous
16th Nov 2014 2:39pm
You have a hearty poetic tale here and ever that flows at ease..however much the length. You keep the reading easy. This piece is like defining in finesse what love is..and what art is.loved the way the artist describes n captures the eternal love amidst anything. His soul too would wander young in eternality. Such is art n the artists. Superbly painted, JF.tq fr the. Read:)

Re: how the artist paints love
crimsin (Unveiling)
16th Nov 2014 4:30pm
John you have such deep beauty in you that is revealed in your artistic inking with love Crim

Re: how the artist paints love
Quill-in-Heart (Tony Pena)
16th Nov 2014 7:29pm
Absolutely terrific details, John. A picture, they say, is worth a thousand words, but your words paint a picture few artists can catch. Great job !

Re: how the artist paints love
Magdalena
16th Nov 2014 9:10pm
A wonderful piece of a moments captured in time.  Beautiful John.

Re: how the artist paints love
jemac
17th Nov 2014 2:39am
'His palette would be his sheild' that phrase alone spoke volumes to me..a beautifully crafted portrait...

Re: how the artist paints love
_shadoe_ (katyusha)
17th Nov 2014 6:06am
you bring these vignettes to life with such finesse, Mister Feddeler. much enjoyed

Re: how the artist paints love
lilsouthernbelle
17th Nov 2014 7:53pm
Mr Feddeler its as if ur pen was dipped into the paint itself Ur words paint a more vivid portrait than ur art work.
One of my favoites of urs darlin

Re: how the artist paints love
blue_angel
18th Nov 2014 7:54pm
You Sir are artistically enshrined in our hearts with your versed amour. A true work of poetic art, John. I'm not fawning. My praise is undeniably placed appropriately here. Thank you!

Re: how the artist paints love
Anonymous
19th Nov 2014 5:35am
My goodness. I love reading everything that you write. So wonderful.

Re: how the artist paints love
shadowsfallsoftly
27th Nov 2014 2:46am
the last to lines really hit home awesome read

Re. how the artist paints love
impartialbrillianc
6th Jan 2016 8:52am
White Is The Colour Of Beauty