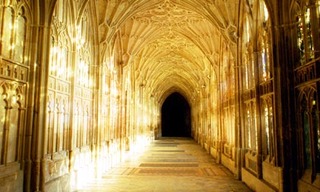 She stepped out of the great marble bathtub and gazed at her image on the gold plated mirror. The Count had spared no expenses when building his castle. A man of great power and refined taste, he always cared to have only the best...of everything.

She walked towards the mirror, limping. A parting gift from her beast of a father, shortly before he abandoned his wife and daughter. He always hit her when coming home drunk, but one night she wouldn’t stop crying, her tummy aching from malnutrition. He kicked her so hard he crushed her ankle, and it never fully healed. Her lazy mother never cared to take her to a doctor, she was too busy copulating with villagers that gave her gifts like cheap jewelry or some pennies. A small handicap didn’t matter as long as Isabelle could manage the housework, feed and clean the animals, and do errands for the neighbors for extra income. Nothing more than a slave in her own home, having no hope for a better future.  But all this mattered little now…soon it would be over, the pain, the limp, her ever weak constitution…it would all end soon…as would her life as a human. Tonight was her 18th birthday….and the night she would die…

And be reborn in Immortality.

She recalled the time she first met the Count. Her mommy dearest had taken her to the mountain hut, supposedly to gather more wood, the winter was especially harsh that year, Isabelle was no more than 11 years old then. Of course truth was her mother intended to run away with a merchant she had met, a pig of a man, but earning enough money so she could have the jewels and fancy low-class garments she so loved. There was a problem though…the merchant didn’t want Isabelle, he already had 2 children from his deceased wife and didn’t want the added expenses of feeding another mouth. Moreover, no one would want a cripple for a wife, so the merchant wouldn’t be able to get rid of her.  Isabelle was useful as a slave…but now she had become a liability.

“Now you stay put, child” her mother told her as she walked out the hut’s door. It’s snowing outside, and you are always so frail, I don’t want you to catch a cold or even worse, pneumonia. You stay in the hut close to the fire and I’ll gather the wood, I won’t be long. Isabelle didn’t suspect  this newfound kindness form her mother’s part, she was happy not having to endure the harsh mountain’s cold, instead getting to enjoy the small fireplace’s warmth. Her mother walked smiling out the hut’s door…. and Isabelle never saw her again.

Hours passed and still no sight of her mother. The wind was howling outside and there was no more wood to keep the fire alive. The night had arrived…and with it, the ruthless stalkers of the mountain. Isabelle gasped and sprang to her feet when she heard the wolves howling. She realized something was awfully wrong. Too young and scared to think straight, she rushed out of the hut to search for her mother. It didn’t take long for her to lose her way in the dark snowy landscape. When she started to feel the frostbites she tried to return to the hut…but couldn’t find the way back.

It was when she collapsed crying in the snow when she saw them…dark,  terrible forms, lurking in the shadows. The wolves had heard her cries, caught her scent…and now they had found her. Utter terror filled her entire being as they slowly closed in on their pray, enough for her to see their fierce eyes, filled with anticipation of the coming feast.  Their yellowish long fangs gleaming in the dim light, very soon they’d tear the flesh from her bones…she barely had time for a prayer to the angels, begging them to grant her a quick death. It all became a blur as the leader of the pack leaped at her.

No angel came… but another form sprang out of the shadows, faster than the eye can see. The man grabbed the wolf in mid-air and brought it down on his bent knee, crushing the beast’s spine like a twig. The rest of the pack stood frozen in place for a second, but only for a second. Then they attacked the intruder in unison, only to share the fate of their leader. Terrible growls and animal whines filled the air, mere seconds passed until the few survivors of the pack fled into the shadows, their instinct of survival stronger than their hunger.

The majestic man stood before her bewildered tear-filled eyes, his aristocratic clothes being torn to shreds but his flesh miraculously unharmed. She looked deep into his blood red eyes and knew her mind, body and Soul belonged to him for Eternity.
“You have a choice, child of man” the Count addressed her. His voice calm, deep and otherworldly. “You can stay here and accept the fate others decided for you…or you can join me”. It wasn’t much of a choice, really…she slowly extended her frail, trembling hand to his.

Now, seven years later, she still couldn’t believe her luck. Or destiny…a humble, downtrodden, abandoned village girl to be accepted as a maid in the Count’s castle….to be the personal servant of the Countess, the most beautiful and imposing woman she’d ever seen, a perfect consort of the kingly Count. With time, Isabelle became her protégée and confidant. The countess introduced her into their secret society, when Isabelle earned her trust.

The Immortals, feared and hated by the humans. They considered them monsters, feeding on innocent people…never taking the time to think that humans preyed upon every other living thing on Earth. Contrary to mankind, the Immortals never killed for sport, conquest or profit. Never fought against each other, never cared for having more and more, just to gloat on accumulated wealth and so many other meaningless things humans obsessed about. Immortals had a deep respect for Art and science, while humans wallowed in the mud of religious fanaticism and strict dogmas, human inventions to give their pitiful lives some fake answers and reasons to endure the torment of their ephemeral existence. Intricate belief systems, cunningly devised by their leaders, used to scare the humans into submission, and justify wars and the exploitation of Mother Earth…after all, their gods made this world for them, so they could do whatever they want with it….or so they liked to believe. Humans couldn’t accept the fact they were not the top of the food chain. So lost in their delusions, they considered every other living being inferior. The crown of creation they called themselves, especially proud of their society based on fear, murder and greed.

Isabelle was introduced into a much more advanced society, that of a superior species not needing wars or glory or more wealth than they already had. Sure, they preyed upon the human cattle, but never killed more than necessary for their survival. Her fellow humans always considered her inferior, a servant, a crippled girl not worthy of a decent life….but the Immortals, free of prejudice or false pride, accepted her as she was and gave her sanctuary. And tonight, they would grant her the utmost honor, to become one of them. She had come in contact with perfection…and tonight, she would become a part of it.

A small part of her was screaming inside, knowing what was to follow….her human self couldn’t accept it’s upcoming death, it made her heart beat frantically, made her legs tremble, made every effort to make her run away…but she knew she had no place to go. No, only forward now for her.

The maids anointed her body with rare mystical essences and wore her a long white gown.  They chanted in an ancient forgotten language as they accompanied her descent on  the long winding stairway to the castle’s secret chambers. All the members of the Immortals family were gathered to greet the newest member of their ancient society…and feast on her blood in the ritual’s culmination. The Count and Countess stood at the entrance of the first hall. She kneeled before them showing the proper respect to the royal couple. The Count smiling addressed Isabelle.

“As when we first met, child of man, you will now decide on your own free will. Once again, you face a choice. You can remain human, and seek your fate in their world, or you can join us in eternal life”. The Count slowly extended his powerful hand towards Isabelle. And like that night seven years ago, she gave him her fragile, trembling hand. He gently closed his mighty fingers around her hand, sealing her fate. Gently, he pulled her up….and led her inside  the first Crypt.  The massive doors closed by unseen hands, protecting the sacred ritual that would follow. Three times should Isabelle prove her eternal devotion to the Immortals, three chambers to walk into as a human…and exit the last as an Immortal.


Next : The Chamber of Initiation.

Written by AlienScum
Published 30th Sep 2014
Like This?
Poems by Author
Comment
All writing remains the property of the author. Don't use it for any purpose without their permission.
likes 3   reading list entries 0
comments 9   reads 935
Commenting Preference:
The author is looking for friendly feedback.
Re: Isabelle
Tamaura_NightAngel
30th Sep 2014 11:50am
wonderful poem i feel like the girl insted right now i am eing eatten by wolfs great poem indeed  your work is truly amazing :)

Re: Isabelle
cyberqueennz4
30th Sep 2014 12:11pm
Wow this is Awesome !!From the bowels of hell She is reborn to live for all eternity !!! Well done Master Poet looking forward to the finale !!

Read poems by AlienScum
Re: Isabelle
BlueBeastGirl (Running from the Reaper)
14th Apr 2015 8:58am
Took my breath away...

Re: Isabelle
cyberqueennz4
22nd May 2015 7:25am
Await the first chambers story with bated breath xx