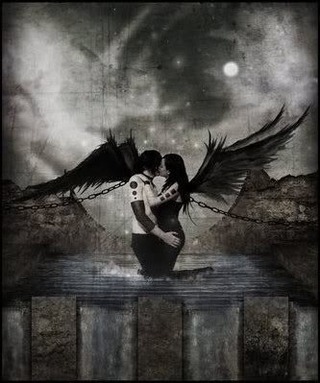 She clenched her mouth shut, denying him entrance. He groaned and slapped her. She looked at him straight in the eye and smiled.
“is this the best you can do..... weakling ?” she couldn’t believe what she just said, or the sheer pleasure she felt inside her when she spat on him right after…or what she felt arising inside her….a wave of power she had never felt before….or the Dark Prince’s reaction.

His fiery maniacal eyes widened in disbelief …then after some seconds that seemed like an eternity, he reared his head and laughed so loudly it echoed throughout the great torture hall. It was the first time he ever spoke to her. She loved his deep and powerful manly voice.

The walls of the stone hall were now covered with thick green mist, like matching the wetness of her velvet folds, the mist writhing and swirling forming currents, like wanting to resemble his throbbing manhood and the pre-cum dripping from the tip of the head.

He slapped her again, so much harder this time. He grabbed her jaw with his mighty hand and forced her mouth open. Then, looking her in the eyes he claimed her mouth, driving his throbbing manhood down her throat until she started to suffocate. He persisted, going all the way in…. slowly, to enjoy it all the more. She bit so hard he screamed….and laughed even harder. He pulled back and waved his hand as the Queen gasped for a breath. The chains lifted her up into the air almost to the ceiling, then violently shook her body across the hall, finally ending their crazy trajectory on the altar in the middle of the great dungeon. She heard and felt the thud of her body on the cold marble…and relished in the thought of what was next.

The Dark Prince jumped high lifted by cloud of living darkness, hovered for a second above the altar, then descended fast unto her. The chains on her legs slithered away as he clenched his fists around her ankles, lifting her legs high. He rubbed his swollen manhood across her slit, her feeling the impact of each of the coils of the chain around his rod on her clitoris….she climaxed again but he didn’t let her catch her breath. He grabbed her hair forcing her to look down, where his head started to part her velvet swollen folds…they both let out a long loud moan as he plunged deep inside her. Then pulled back slowly for her to witness it again, this time his manhood glistening, covered in her free flowing juices.

The walls started to become transparent, not that she noticed…
Having her knees on his strong shoulders he leaned on her letting her feel his whole weight, her body arching as much as possible, her path of pleasure wide open. When he reached the deep of her….he just shove deeper breathing in the Queen’s pleasure and pain. He started going faster, in and out, deeper, harder….she grabbed his hair, pulled him on her and bit his neck so hard he let out a wild scream…of sheer joy…then he went faster and harder still.

He suddenly arose, grabbed her and flipped her body face down on the altar like she was weightless. He pulled her pelvis up to bring her on her knees and pushed her head down on the altar…the sight of her open buttocks and her swollen dripping pussy drove him insane…and she only fuelled the fire when she turned around, looked at him smiling, slapped her buttocks so hard it resonated through the dungeon. She dipped her finger deep into her to lubricate it…so it could slip into her ass easily right after.
“Come on you bastard dog…give me something better than your  pathetic performance so far”…she was exhilarated knowing she had power over him now, playing on her terms too…and the Dark Prince didn’t have the usual ironic smile this time…men, she thought to herself, my maid was right about them…they’re so easy to manipulate once you…"

She hadn’t time for more conscious thought as the Dark Prince claimed her from behind…the pain flooded her making her mind go blank…he didn’t permit the Queen even time to breathe as he pulled her hair so hard back she arched back to him, his teeth sank on her back’s tender flesh and his mighty hands greedily abused her swollen breasts for a bit, then he lowered one hand between her legs, to play rough with her pussy…her fluids run down her trembling thighs to the altar. They both went wild… she had two of the most intense orgasms she ever felt, one right after the other. Then, she desperately needed some air so she let the Dark Prince use her body all he wanted her consciousness was so hazy to feel much now…or care for much either.

It was then, when she let her gaze wonder around the dungeon, that she noticed a man hiding behind  a great support pillar, watching from the shadows.

They were not alone...

Written by AlienScum
Published 16th Jul 2014
Like This?
Poems by Author
Comment
All writing remains the property of the author. Don't use it for any purpose without their permission.
likes 3   reading list entries 0
comments 7   reads 748
Commenting Preference:
The author is looking for friendly feedback.
Re: The Dark Prince - The Queen's dream pt 3
Alynde
17th Jul 2014 1:43pm
Oohhh, can't wait to read what happens next!

Re: The Dark Prince - The Queen's dream pt 3
cyberqueennz4
4th Sep 2014 12:45pm
OMG Great read I was there watching !!!Hot words almost had me climaxing