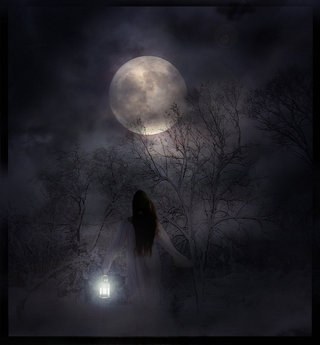 “Is it really condensed Moonlight ?” the young Queen asked her old maid. Her slender hands held the small vial so carefully. The enchanting eerie light coming from the liquid inside mesmerized her.

The hag-maid giggled. “Silly…it’s just a soothing herbs potion to help you relax and sleep. You have been restless lately Milady.  I just like fairy tales, so I add  a little bit of fantasy to everything. Magic…makes the world more interesting, don’t you think ?”

“I don’t think I could live in a world without magic” the Queen replied. Some may frown and call me childish. I like to believe magic is real and interwoven with the world most know, the other half of it. I would love to know it all, about the stars, the ancient secrets, the faraway lands of eternal ice you told me about, where the gods landed eons ago”

“Maybe your wish for knowledge is fulfilled sooner than you think” the hag replied, the brittle pale skin of her face forming some semblance of a smile.

“Why did you send the rest of my servants away tonight, it’s not full moon yet” the Queen asked.

“Moon is three quarters full, and every night your sleep is more disturbed. And soundful….so better not risk people knowing about your…nightmares” There was  a faint ironic hue in the maid’s words towards the end of the sentence.

“Yes, my dreams have been so dark lately…I don’t even want to talk about them, even to you…better to listen to your amazing ancient stories !” was the evasive reply of The Queen.

“The Dreamworld is a place of untold wonders and perilous shadows, but fear not. I will safeguard your spirit every time. You are so precious my Queen, you will achieve great things in the near future . Nothing can be allowed to obstruct your path to greatness and I will personally see to this” the maid said.

The Queen smiled at her. “You are so good to me and so wise. I am so lucky to have found you, that rainy day…you were lying on the ground in the middle of nowhere, fortunately the driver of my carriage spotted you. Those bandits that robbed you and hurt you so mercilessly…how can anyone be so cruel, your whole body was bleeding…since that day, I felt more…safe, like the mother that passed away when I was so young  came back to me, you tended to my every need, knew what I needed even before i uttered a single word, your stories about the ancient gods and the hidden aspects of the world, the unseen…people consider you cold and sometimes cruel...but only because they don’t know you as deeply as I do….you’re truly out of this world !”

The hag’s eyes glimmered in the faint light. “Drink some of it and rest, my Queen, tomorrow will be  a long day  for you”.

As was every day since she became Queen of the realm…charity fairs, ballrooms, boring court gossip, evenings of poetry and art…and loneliness. She wanted to sleep or daydream more as time passed. So little true joy in the real world, just mundane obligations and boring repetition, always wearing a smile that with time became just a mask, no real happiness behind it.  And all people looked up to their Queen expecting her to be perfect,  she wasn’t  a carefree Princess anymore…how she missed the days at her father’s palace.  So strange she couldn’t remember much, like she was there in some past lifetime, all memories fading in  a thick fog…she was horrified to think she could lost her mind one day, like her father….sometimes the darkest thoughts haunted her, and those earthquakes recently only made things worse…they shouldn’t even happen, the middle Kingdom very rarely experienced the earth shaking…lately this has changed, especially on nights of  a full moon…could it be  it was angry with the Earth or the people ? Or the celestial order her maid told her about had somehow been disturbed ? Or some titan could dig his way up to the surface or…

Written by AlienScum
Published 10th Jul 2014
Like This?
Poems by Author
Comment
All writing remains the property of the author. Don't use it for any purpose without their permission.
likes 4   reading list entries 0
comments 4   reads 635
Commenting Preference:
The author is looking for friendly feedback.
Re: The Dark Prince - The Queen's dream pt 1
nymphetaminegirl
10th Jul 2014 1:38pm
So happy to read this next chapter. Keep on writing :-)

Read poems by AlienScum
Re: The Dark Prince - The Queen's dream pt 1
AngelofAnarchy (RaysNewWorld)
14th Jul 2014 1:13pm
Oooh this is intense. I can't wait for more!!