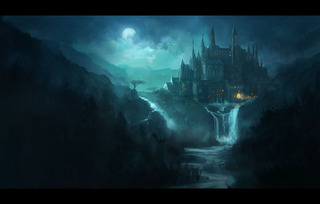 The Dark Prince - A night with the King pt 1

The king let his gaze fall upon the naked body of the royal guard’s Captain. His weary eyes had seen enough death and desolation, now they deserved to behold something beautiful. They have been brothers in arms, loyal comrades and lovers…what else could anyone want from life ?
They have conquered realms, vanquished their enemies, survived many fierce battles, assassination plots, even magical attacks…always fighting back to back, watching over each other. The epitome of Man, the King thought as he relished in the manly features of his most trusted and loved soldier.  If he had a son, he would like him to be exactly like the captain…and he had his plans for this. He knew his seed was not fertile and he never found joy in the arms of a woman. But the King knew his battle brother enjoyed the best of both worlds. A drugged Queen wouldn’t know she carried the sperm of the strong Captain, and despite his possible objections to this, he would follow the King’s orders in the end.

The Captain, lying on the bed turned to face his King as he gazed over his kingdom through the window. A grimace of pain appeared on his face. The King frowned, as he could feel the Captain’s pain himself. He sat on the bed beside the him and let his fingertips run gently over the big scar on the Captain’s chest, running diagonally and irregularly from the right shoulder down to the left lower ribs.
“Does it still hurt ?” The King asked.
“Some nights it’s worse, especially on every full moon…magical wounds never totally heal, but it comforts me to know that viper felt a lot more pain” the Captain replied. His face darkened, when the bitter memories of the dark night his platoon of elite warriors, the best soldiers of the kingdom, went on the most perilous mission of them all…to dispose of the Sorceress of the Black Forest. Only the Captain made it back…holding the most precious artifact in the whole world.
The dark gem that powered the Evil Sorceress…rumors said it fell on this earth countless years ago, in a great ball of fire from the heavens. All who dared touch it  died seconds after, in the most excruciating pain, their flesh blistering then melting off their bones.  Only the Sorceress survived, chosen by the living Gem.

She had been a valuable ally to the King for long. Without her help, without the creatures of the Abyss she could summon, they would never be able to defeat the Northern Kingdom, or face the dreaded Djinns of the Southern realm. Without her subtle and powerful potions and venoms, high-ranking officers of other kingdoms  would never agree to co-operate and betray their people and kings, the great Witch’s fees for her services were considerably less than the gold the King would have to pay for the bribery or assassination of so many.
Of course, the Sorceress required little gold because she was rewarded in other, darker ways….good thing the citizens of the realm, intoxicated by the glory of victories and incoming plunder and slaves, were too  immersed in orgies and feasts to care about young poor  girls keep disappearing from orphanages and the streets…the black chariot of the Sorceress  came every night of a blood red moon, to carry the unfortunate young virgins to her dark Tower…the King felt sick in the stomach when he remembered her dark rituals, the merciless tortures, and in the end the Arch Witch drinking the girls blood and feasting on their hearts, freshly cut from their chests.  The she-serpent was old beyond belief…and needed to sustain her dark beauty. It wasn’t the killing that disgusted the King, for him it was a necessary sacrifice for the Kingdom, after all men died on the battlefield in equally horrible ways. What offended him was that the victims had no way of defending themselves and die an honorable death, but still, they served their King and country. He did have his distorted sense of honor.

When conquest was over…the Sorceress was no longer needed. Furthermore, she had gotten too greedy, requiring more and more sacrifices. When she openly threatened the King, he knew he had to deal with that serpent once and for all. Pretending to bring a special victim as a token of friendship from the King, the elite guards entered the Witches’ tower. After a bloody fight, the Captain managed to snatch it off her chest while she incinerated his men one by one. She retaliated with a bolt of eldritch dark lighting, but this didn’t stop the Captain from throwing the Gem into a pouch, not daring to touch it. The few surviving men closed in on her, gravely wounded but still doing their duty. Being robbed of her power, she called her black stallion and what followed was a frantic pursuit through the dark night, a great storm raging.

Only the Captain and one royal guard remained when they cornered her on the edge of a cliff, the rest died from their wounds on their horses honoring their oaths to the King until death claimed them.  She killed the last guard with a dagger when he tried to seize her, the Captain enraged drove his horse unto her, pushing both over the cliff. He managed to grab a ragged tree and survive while she fell screaming to her doom, into the deep churning waters underneath.

The horses corpses were found days later…but not her body.

Written by AlienScum
Published 4th Jul 2014
Like This?
Poems by Author
Comment
All writing remains the property of the author. Don't use it for any purpose without their permission.
likes 6   reading list entries 1
comments 8   reads 826

Commenting Preference:
The author is looking for friendly feedback.
Re: The Dark Prince - A night with the King pt 1
nymphetaminegirl
4th Jul 2014 2:33pm
Thank you for posting this... once again can't wait to read more :-)

Read poems by AlienScum
Re: The Dark Prince - A night with the King pt 1
Anonymous
4th Jul 2014 6:38pm
Great stuff, love the storyline.

Read poems by AlienScum
Re. The Dark Prince - A night with the King pt 1
Karmen_McGuire (Karmen)
18th Jul 2019 1:29am
Really enjoyed the first installment of this series, keep up the details.