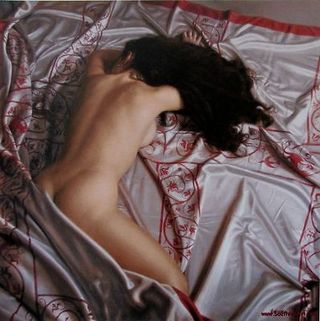 in this city, women come in one flavor:
the dangerous kind.

she sat on the bar stool with her silk covered legs
crossed, all the ammo she needed to gun me down.
I nursed my drink as I carefully observed her bosom,
but not just for the obvious reasons; I almost expected
her to draw a Derringer out of her bra.

two prominent men that she was known to have
caroused with, were found strangled in seedy motel
rooms. one of them was a judge, so the case was red hot.
all the flaming neon arrows pointed to her, but you can’t
hang an enterprising girl for sleeping around.

she wanted to be comfortable while I interrogated her, so
we went to her Fifth avenue apartment. she slipped into
her powder room for a moment, then slipped out in a flimsy
thing made of my wettest dream. she offered me a short
dust-colored drink, & like a sap, I took it.

after two swallows, I succumbed to the beckoning of a soft
black embrace, the same one the hero falls into in old
predictable movies.

when I awoke, the sun was poking through the blinds with
orange juice fingers. she was sleeping next to me, all naked &
beautiful, but I couldn’t recall the night’s X-rated details…if
there were any.

the radio’s morning news informed me that another of her
ex-boyfriends had been found murdered. same cheap setting.
same m. o. only this time, I was her alibi.

I’d like to say that I collared the Midnight Strangler, collected
the bounty, & got the girl with the dangerous eyes too, & we
drove off into the sunset in my Coupe deVille…

…but in my passion plays, the femme fatale always wins.

Written by JohnFeddeler
Published 7th May 2014
Like This?
Poems by Author
Comment
All writing remains the property of the author. Don't use it for any purpose without their permission.
likes 15   reading list entries 2
comments 15   reads 1088

Commenting Preference:
The author encourages honest critique.
Re: woman of inclemency
_shadoe_ (katyusha)
7th May 2014 8:11am
your tales of these dens of iniquity are always engrossing, Mister Feddeler. much enjoyed.

Re: woman of inclemency
blocat
7th May 2014 9:35am
Never read you before John but certainly will in future. A lot of very expressive and original lines in this. Enjoyed immensely. Go to the top of the class.

Re: woman of inclemency
KittyFromHell
7th May 2014 10:00am
Damn! Sexy and mysteriously captivating... Would take this piece over most crime shows on TV any day..

Enjoyed the read from start to finish!:)

... sun poking through the blinds with orange juice fingers

I'm always amazed by the layers and depth of the metaphors and personification you use in your pieces ...

Re: woman of inclemency
PoetSpeak
7th May 2014 12:35pm
Really liked the flow on this entry.
Sexy and provocative.

Re: woman of inclemency
domore2014
7th May 2014 4:39pm
Truely enjoyed this read.. captivated me from start to finish..in my mind I read like the narrator in a movie much like how the movie Sin City was delivered.. Bravo!!  with respect..domore

Re: woman of inclemency
Awakenedsoul
7th May 2014 4:57pm
She is a clever little girl.

Re: woman of inclemency
Darkchocolatpoetry
7th May 2014 7:33pm
Bravo bravo this very beautiful enjoy reading it

Re: woman of inclemency
Tristique
7th May 2014 9:56pm
The third stanza is hard-wired to gritty humor, and the whole unfolds wonderfully.

Re: woman of inclemency
crimsin (Unveiling)
8th May 2014 8:06pm
John I see you in a smoke filled room reading this sexy ink.. you amaze me with your vivid writes taking me on a journey and delivering every time thank you :) with love Crim

Re: woman of inclemency
Zazzles (Broomie)
9th May 2014 4:30am
You devil you ;) a smooth talking sleuth!
I adore your thoughts John, and they are always so vivid and full of delights!
always a pleasure to read your ink!
Zazzles

Re: woman of inclemency
Lena-underneath
12th May 2014 4:27am
Though this reminds me of a night in Vegas...I had in Angel wings and in the end there were feathers all over the room.....lol .....anyway....your poems have such an incredibly sexy and sensual feel with a touch of danger and or darkness....