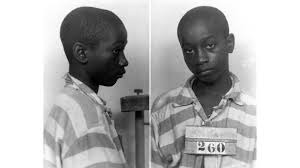 21 October 1929- 16 June 1944(aged 14)
The youngest child to be executed
For a crime in the U.S in the twentieth century
Accused of a crime, no proof provided
Segregated time
Family forced to fled in fear of lynching
This child George stinney left to face trial alone
No confession ever recorded
Just fourteen years old
Went to trial
His young life put into the hands of
Court appointed tax lawyer Lawyer Charles Plowden
This person was meant to be his defence
Only had his own political interest in his head
No witnesses to be called, no transcript of the trial
Kangaroo court
Having the power over his young life
Forced confession
10 minutes to make a decision
George stinney was sentenced to the electric chair
A fourteen year old child to die in 83 days
His lawyer didn’t even request a retrial
Five feet one not even weighing hundred pounds
On June 16, 1944 at 7.30pm
He walked to the execution chamber
With the bible under his arm
The electric chair was never meant to take a child’s life
Used God’s sacred book as a booster seat to murder a child
The electric chair mask to big
Slipped off revealing his wide open tearful eyes
Fear and terror
Etched on his young face
Four minutes for this wicked injustice to be completed
69 years later his family are fighting to clear the name of
GEORGE STINNEY JUNIOR

The face of this child haunts me, the wrongs hurt me. His name has to cleared so he can REST IN PEACE...

Written by natural
Published 8th Dec 2013
Like This?
Poems by Author
Comment
All writing remains the property of the author. Don't use it for any purpose without their permission.
likes 9   reading list entries 1
comments 15   reads 1485

Commenting Preference:
The author is looking for friendly feedback.
Re: GEORGE STINNEY JUNIOR
MacDaWeedSaiyan
8th Dec 2013 8:47pm
saw the video on youtube...it sucks that he was killed for something he most probably did not do

Read poems by natural
Re: GEORGE STINNEY JUNIOR
Poetikmind (_---_)
8th Dec 2013 8:59pm
Damn... This one got me... Deeply troubling
though I'm NOT shocked, there's so many more
horrendous things/crimes suffered by so many children n families back then that honestly I'm glad I don't know every story, it'd be too heartbreaking to stand. Powerful ink lady

Read poems by natural
Re: GEORGE STINNEY JUNIOR
rain1courtel (RainC)
8th Dec 2013 10:00pm
Another story of racial injustice. I remember reading the history of George's story, truly the epitome of courthouse injustice. Stories like this one, Emmett Till, Jesse Washington, the Birmingham bombing, etc... are very much in the present....We've come far, but not far enough. You've penned this well natural...Xo
Pen Respect~

Read poems by natural
Re: GEORGE STINNEY JUNIOR
Firebyrd
10th Dec 2013 3:51am
Oh Honey This is a real live Gut puncher to the society we live in!

Read poems by natural
Re: GEORGE STINNEY JUNIOR
CeCeLyric
11th Dec 2013 3:25am
I share the hurt of so many families who were victims of segregated crimes. Horrendous!

Re: GEORGE STINNEY JUNIOR
Imagining (Glynis)
29th May 2014 7:06pm
Horrific!
This is deeply troubling that twenty years has passed and we are still seeking justice when it should have already been given to him and many others.

We have a long way to go in this struggle.

Re: GEORGE STINNEY JUNIOR
xmar82
1st Jul 2014 6:36pm
Horrible injustice! But this unfortunately is still going on to this day. Provoking write.

Re: GEORGE STINNEY JUNIOR
CasketSharpe
15th Oct 2014 10:26pm
This is some wicked deep shit!I'm glad you put it out there for those who think we still live a fairy tail society with eyes closed to the hidden truth.