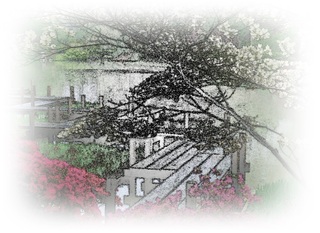 She sat under the tree, on a park bench looking at the village square. It never ceased to amaze her that so much seemed to be happening in such a small village.
On the middle of the village was a fountain with a statue of the Governor on it. The sculpted effigy of the venerable lady did not depict her true beauty however, and the Watcher shook her head.
She sat there, her soft hands folded on each other, contemplating her life and how she came to the village, fondly called Dupass. She knew there was another name for it but she forgot. To dupe an ass seemed more fun, and she smiled to herself.
She heard the flap flapping of a scabbard against saddle, and she turned to look at a regal looking warrior woman riding a white horse.  The loose sword at her left side flapped incessantly against the saddle making a steady beat. The woman, Gypsy Red, was true to her name, fiery hair falling in curls behind her back and she did not wear her helmet, seeming to enjoy the gentle breeze.
Out of a seamstress shop, two young ladies so opposite to each other emerged. One had long honey blonde hair that fell to her back; she had green eyes and was very slim. She was known as Magdalena, an herbalist. People believed that she knew the ancient ways of witchery, but to the observer she was just a very intelligent individual. With her was a svelte ebony princess, with her hair in many braids; her eyes smouldering fire, she was a catch for any man. She was a warrior once but left to raise a family; Glynis by name, she was also a good raconteur. The two young ladies stopped at the village fountain and spoke to the warrior on the horse. For a moment the tableau reminded the watcher of a time long ago, when she tended to the Dryads and Hamadryads. The setting sun in blazing hues lighted them up, and made them almost surreal. The group broke up and a man of the Eastern gait walked into the square and sat down on a bench facing the statue. The Engineer, he was called, had just finished drawing up an aqueduct that would supply the village with clean water. He seemed to be fond of his lyre and soon began to strum it, singing softly under his breath. The warrior woman looked at him for a while, shook her head and made her horse canter away. A dog barked, and ran towards Engineer dragging a gangly young man behind it. The man named fondly as Soul the Teaser had another name, but the watcher forgot.  He was also a bard, and sang about unfathomable things that made the elders like her, shake their heads. He exited with his noisy dog with a yowling cat behind him.  A man with short black hair joined Engineer and watched him idly as his fingers played over the string. The man, Michael, started to say something and the Engineer shook his head. Another man with a flute joined the two man, and they began to make a certain harmonious sound that pleased the observer. The flutist was known as the one, or Utma. He was in his late 20’s that showed in his enthusiasm. Michael was pleased and started to sing “A Bard Song” when another musician joined them. This newcomer was a tall man, not given to smiles, but commanded a certain presence. Mr Musical Man, dark ebony countenance softened as he began to strum his sitar.  Soon the little group began to sing a song that evoked goosebumps on the Watcher's arms. A good teacher going home from work, by name of Kitty Peace, walked by and stopped awhile to listen to the song. She clapped her hands in time for a moment before moving away to go home. Soul The Teaser somehow managed to subdue his dog and returned to the village square to enjoy the impromptu concert. He was a mean strummer himself, but did not bring his instrument for the occasion. Another man joined them, clapping his hands with the tune. This man was different as he was once a Prince, but wandered into Dupass and took the name Lucifer.
Suddenly out of the gloaming, a group of warriors on horse back, galloped in.
Baleful and Sir Lancelot rode in dressed in full battle regalia. Hades was right behind them, with Demo and Drivel the Lion hearted. Many others galloped in,lending their might to the others. Their regal ranks was impressive.
In the distance, vaguely seen in the gathering darkness, a lone man blew a bugle. It reminded the Watcher of Sir Strider, who did not return during a heavy fracas with a hydra. The group passed in full gallop, no doubt going for another conquest, or defending the territory against marauders. But they disrupted the little concert on the square. The grumbling group went quiet as a gorgeous woman in long flowing gown walked by. She was a dancer and a travelling bard. A young man watched her from a doorway, his eyes sparkling with expectation. From the café across the street the owner Mlle Lavender waved and the dancer, called Miki, waved back.
The watcher sighed. She was always at the fringe of the society; she was never really amidst their going ons. She wished she could leave sometimes, but somehow something always kept her there, almost like a covenant with a higher power.
She settled under her tree and watched on.

*I wish to thank those whose name I used in this short story.*

Written by Grace (Idryad)
Published 21st Oct 2013
Like This?
Poems by Author
Comment
All writing remains the property of the author. Don't use it for any purpose without their permission.
likes 4   reading list entries 1
comments 8   reads 866

Commenting Preference:
The author is looking for friendly feedback.
This story
Grace (Idryad)
21st Oct 2013 10:50am
was entered in a competition here. Thank you for reading.

Read poems by Grace
Re: The Watcher’s Tale
souladareatease
21st Oct 2013 2:19pm
Ahhhh But You are such a Wonderful story teller ;)
Beautiful Write Dear Grace!!!

Read poems by Grace
Re: The Watcher’s Tale
MusicallyMrM (Mr_Mahogany_Wood)
21st Oct 2013 3:32pm
Story Telling Grace, you are a master.

Read poems by Grace
Re: The Watcher’s Tale
LunaObscura (Utmakalitho Petragammata)
22nd Oct 2013 6:39am
You created a seamless atmosphere (apart from my electric bass missing but for the anachronism, i'll allow it). Good luck in the competition!

Read poems by Grace
Re: The Watcher’s Tale
dizzzzzzy (Nunaya)
6th May 2021 12:44pm
I'm gonna step out on a limb an give a response to my comprehension of what I read....her and the electric bass didn't share a flute. But he sure liked to get really stoned back then. :)