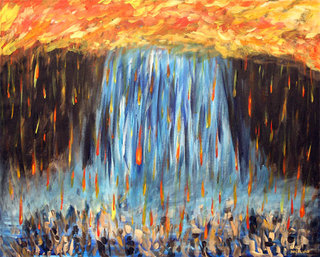 The Jotunn, Sons of Muspelheim, (Episode 3, Part of the ongoing Saga of Surtr).

"And they had a king over them,

which is the angel of the

bottomless pit, whose name in

the Hebrew tongue is Abaddon,

but in the Greek tongue hath

"Muspel," stand in the field that is

I will lead its sons the, "Jotuns," in

to this dark fore-boding abyss


They will be clothed w/ me and my name/identity

will be in their fore-heads

goes forth to consume

My appearance: a fierce countenance

but down-cast, my dark aura surrounds them and

They are no longer, "Metaphysically," considered

For they have descended even from that realm

They will have my golden crown upon their head

which associates me w/ them

(symbolic of having a power over you; they will

no longer have power over their own bodies and

will be given-over wholly to this, "Surtr," being),

Their teeth will be like unto lions cause they will

go forth consuming everything that stands before

them: beasts they will be

Their chests will be as an breastplate of iron so

that none can resist them

They will have wings by which they are carried by

my winds, winds that carry them forth unto my

battle by which I will be sated

There are thousands-thousands of them so that the

earth will quake like the sound of horse running

Before them all will perish


My, "BRIGHT SWORD," which I carry to bring thousands

to death, my power will be fire that I call down from

heaven before these, "Jotunn


In the midst of this clash and din the heavens are

rent in twain, and the sons of Muspell come riding

through the opening, Surtr rides first, and before

him and after him flames burning fire he has a very

BRIGHTER THAN THE SUN,")

as they ride over Bifrost it breaks to pieces, as has

before been stated, the sons of Muspel direct their

course to the plain which is called Vigrid.... The

sons of Muspel have there effulgent bands alone by


This that I'm about to show is mind-blowing, read on:


The etymology of "Muspelheim" is uncertain, but may come from Mund-spilli, "world-destroyers," "wreck of the world


When a light, ("BRIGHTER THAN THE SUN,") burst on the New

director of the pioneering effort to build the atomic bomb,

famously quoted Hindu scripture: "Now I am become death, the

For half a century since Trinity, the first nuclear test,

mankind has lived w/ the thought that Armageddon/Ragnarok

is no longer mere Biblical/Norwegian symbolism


"Surtr," has a very good sword, "Which Shines Brighter than

A light shining brighter than the sun, ("Nuclear Blast"),

"Muspelheim," "World-destroyers," "Wreck of the World,"


Is this all ironic or have we had two, "That I see so far,"

"Oracles," speak and do now see?


"Surtr," guardian/King over them is upon us

He are we, we are he


But the end is not yet; the sons of, "Muspel," are now alone

effulgently celebrating in their victory but chaos is about to

Written by hungrypan74 (Dantalyon)
Published 27th Jul 2013
Like This?
Poems by Author
Comment
All writing remains the property of the author. Don't use it for any purpose without their permission.
likes 5   reading list entries 1
comments 10   reads 768

Commenting Preference:
The author encourages honest critique.
Re: The Jotunn, Sons of Muspelheim, (Episode 3, Part of the ongoing Sa
HadesRising
27th Jul 2013 4:59am
this is probably the best of your Surtr series. Great job

Read poems by hungrypan74
Re: The Jotunn, Sons of Muspelheim, (Episode 3, Part of the ongoing Sa
Anonymous
27th Jul 2013 6:33am
Keep writing. I am quite surprised at the parallels to the biblical Armageddon. The breaking of bifrost/breaking of the seals to allow the entry of Surtr/Antichrist (first horseman and the rest of the gang to bring about Armageddon/Ragnarok. Even the army can be compared to the Horsemen to some extent (locusts/famine), sons of Jotunn/war.

This is fascinating - please continue.

re: Re: The Jotunn, Sons of Muspelheim, (Episode 3, Part of the ongoin
hungrypan74 (Dantalyon)
27th Jul 2013 7:24am
Thank You, Petit for showing interest.
It is fascinating.

They do all parallel each other.
That's why none is, "The Only Way,"
to me anyways.

They all have answers to help.


Thanks for enjoying... Pan

re: Re: The Jotunn, Sons of Muspelheim, (Episode 3, Part of the ongoin
hungrypan74 (Dantalyon)
27th Jul 2013 7:01pm
Thank You tremendously, Strider.
Being around such great poetic skill
helps-out a lot.

Read poems by hungrypan74
Re: The Jotunn, Sons of Muspelheim, (Episode 3, Part of the ongoing Sa
_shadoe_ (katyusha)
27th Jul 2013 12:12pm
Pan I've been following your poems for quite a while and I've loved watching your scribes evolve... this is simply incredible hun.

re: Re: The Jotunn, Sons of Muspelheim, (Episode 3, Part of the ongoin
hungrypan74 (Dantalyon)
27th Jul 2013 7:04pm
I humbly Thank You, Winter for continuing to
read my writings.
And I thank you for commenting on my
improvement, (takes a knee).