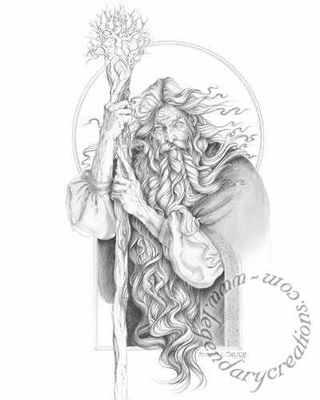 Apollonius  (Lord of the Talismans)

* Edited By the Great and Powerful Grace*
...for surely I would ramble on and on and on...


Over the lands hovered in mist, walks one whom time let’s slip between the harsh held folds;

aging only in his knowledge in pace of the breeze. Born before the time of Christ; journeying now through the age of knight, this so-called medieval day.

Apollo found himself in Hispania, Atlantic land of the Celts, realizing that when he reached one end of the world, conditions abruptly changes.  Having not been here for so long he could feel upon the wind, air of The Visigoth. His linin the perfect match for this climate sewn by the naked priests of Kemet, held fast by the overlaying blanket that kept him shrouded within his favoured secrecy.

The land rolled out its welcome mat of Mediterranean weather as he glanced to the sun for a time. It was a little past mid-day. He who casts no shadow felt it had drawbacks. Wishing to reach the woods down the distant hills before night he hurried forth.

He wished to converse with the birds, his favourite joy; their company were so much better than the night-time creatures for they knew the pleasure of good conversation. Whereas the latter were focused upon hunting and slipping unto shadow mid-speak.

They of the prowl have not the patience for travellers talk; He still believed he would have something worthy to say for his life whole, five years of silence still felt as yesterday, when known only his native tongue.

He cupped his hands and caught his speech, balling his fists throwing his voice. Up to the wind like a shot-put, hurled with its weight to the distant trees. Stroking his beard he paused and listened wondering if his strength was enough for them to hear.

As he started forward came the rustle of a cloud, coloured in black rainbow with cries upon the sky, twisting and diving swooping in dance as the fleet of the trees flocked to greet them.

As a witness to the grandeur a boy on a hill saw this feat and stood stuck within his spot, only after they all landed, did he take off, running towards home to declare what he saw; a man who controls birds with a magical skill.

The first to arrive were the kestrel, diving their way in, as an asteroid to land, they spoke in accordance  their knowledge of the man, passed down from generations from their hunting clan; they asked if it was true that he forged infinite magical tools, ones that maybe could protect of them too.

He spoke to them of olive, “bring me the fruit and sinew of your native borne tree, grains of sand from the edge of land and ash from the Maritime pine split by god of thunder.”

As they flew off he turned to the buzzards and the kites asking if feeding from flesh still felt right, they argued that they serviced the land keeping the old alive through their circling wing, their knowledge we gain and upon this terrain no debris is unsavoury.

Sickness spreading is downright unnecessary. Never would they change their ways he thought, still, he always tried.

He held a nightjar and bunting warbling and nuzzling saying, “You see almost the stretch of land as me. Tell me please, that Sanskrit still breathes? “

“Alas no,” they cried, “the final ways of it have died, within a pocketed few carry a gem or two but fluent is through, hole upon whole where only glorified Hindu make of its use.”

He shook his head, “I feared it so, it was dire when I left, such craft and finesse a kiss on the tongue, too soon falls upon none.”

Unpacking his wonders of alchemy saw the kestrel flying back their treasures held in claw and of beak dropping each bit at Apollo's feet. The last to dive had the ashes within.

Opening his beak for him to collect, he placed them in a vial of liquid which he held by its neck and his other hand he held under and awe was around; as heat came from the palm as blue as the purest sky.

Pouring the contents in a bowl he spoke lost words of man, preparing the other ingredients in a separate bowl. Using his mortar ground out juice and powder and again spoke tongues of man.

Combining these bowls saw a flash then wisp smoke and the smell of iron wafting the air as a cloud full of rain dissipated soon as it was near.

Hens clucked with excitement and feathers were ruffled as all who had amassed began to stir.

With an odd looking tool he formed a shape in symbol of tomorrow and tied it with string around an owl saying purposed direct and loud, “Heed the coming of man for you shall be safe if one of any feather wears this talisman, but if it is lost then numbers shall go for each bird will know peril upon the globe.”

They all agreed the owl was best and most responsible, swearing to guard it in all causes.

He lifted his belongings letting them guide, to where a nights home is, to there in the trees below another hill and push on he must to make before dusk.

Written by souladareatease
Published 20th Jul 2013
Like This?
Poems by Author
Comment
All writing remains the property of the author. Don't use it for any purpose without their permission.
likes 10   reading list entries 2
comments 17   reads 754

re: Re: Apollonius  (Lord of the Talismans)
souladareatease
20th Jul 2013 7:24am
Better watch Your nose will grow there Pinocchio ;)
Thank You For being with Me Dear Grace!!!

Read poems by souladareatease
Re: Apollonius  (Lord of the Talismans)
Anonymous
20th Jul 2013 7:50am
Fascinating story. I want the rest. I think I want a book. What happens with the talisman? Where does he go next?

Dammit - what happens after this?

re: Re: Apollonius  (Lord of the Talismans)
souladareatease
20th Jul 2013 7:55am
Hehehe Made me giggle-Thank You Dear Petit--this is the prequel to another write I did--The wizard the war the dragon the pearl--just many moons earlier---lol crack me up--appreciate You reading my rambles!!!

Read poems by souladareatease
re: re: Re: Apollonius  (Lord of the Talismans)
Anonymous
20th Jul 2013 8:21am
Not sure how I missed that one. But I still want to know more about the birds...

Read poems by souladareatease
Re: Apollonius  (Lord of the Talismans)
Anonymous
20th Jul 2013 1:39pm
A gem of a story.  I agree with PM, more, more more. Lol.

A most excellent write and read Soul. :)

re: Re: Apollonius  (Lord of the Talismans)
souladareatease
20th Jul 2013 10:51pm
:) Greatly appreciated Dear Magdalena-lol we shall see :)

Read poems by souladareatease
Re: Apollonius  (Lord of the Talismans)
JAZZMANOR
20th Jul 2013 2:16pm
I see many elements of your previous compositions in a wonderful and exciting write. Terrific narrative that has this reader wanting more.

re: Re: Apollonius  (Lord of the Talismans)
souladareatease
20th Jul 2013 10:53pm
Thank You Jazz- I was hoping You'd catch this one-Greatly appreciated Sir!!!

re: Re: Apollonius  (Lord of the Talismans)
souladareatease
20th Jul 2013 10:59pm
Thank You Dear Red-Greatly appreciated-She is a Wonderful Partner--(but I get scared when She beats me so...She gets that look You know...I just hope I can keep Her happy...Shhh She'll be coming soon...)

Read poems by souladareatease
Re: Apollonius  (Lord of the Talismans)
Anonymous
20th Jul 2013 8:29pm
Beautiful isnt exactly the word, for this magical write, you truly are a great story teller, I find it fascinating how you seem to have interwoven greek and celtic mythology (I thought of the holy grail for a while) Maybe its just that youve set my imagination going....smiles.
Great write, Soul!!!

re: Re: Apollonius  (Lord of the Talismans)
souladareatease
20th Jul 2013 11:03pm
Thank You so much Dear Queen:) Lol hehehe Holy Grail indeed:) (as for the Celts-I had to place him in another travel than those he is known for...which seem many indeed...I picture him as an original globetrotter soaking up as much as he can of culture and wilds of time)
Thank You:)