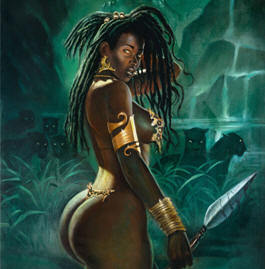 Our king gives us light and direction with each cockcrow
Sun, when others only see the unknown
Warmth, when others are trapped in the gelidness
We attack even when we retreat
He is our Emperor
Father
Kingdom


Postscript: I bumped this because the female warriors of the upcoming film "The Black Panther" were based on these women.

The Dahomey or Mino Amazons

"If soldiers go to war they should conquer or die."

- Motto of the Dahomey Amazons

The Dahomey (Mino) Amazons are the only documented all-female official front-line combat arms military unit in modern history. Tough, uber-intense asskicking women single-mindedly devoted to hardening themselves into ruthless instruments of battlefield destruction, these machete-wielding, musket-slinging lady terminators were rightly-feared throughout Western Africa for over 250 years, not only for their fanatical devotion to battle, but for their utter refusal to back down or retreat from any fight unless expressly ordered to do so by their king.

If you were some poor conscript douchebag militia soldier hanging out around your barracks and you saw these scary-as-fuck kill-chicks suddenly start charging out of the woods in your direction, screaming their war chants with their muskets barking fire and their signature double-edged two-foot-long machetes brandished threateningly over their heads, you had one fleeting moment to overcome your crippling panic and defend yourself.

Because if you failed to kill them – and I mean if you failed to kill every single last fucking one of them, some murderous woman was going to club you unconscious with a musket butt, drag you back to her capital, chop off your head with one swing of her machete, boil the skin off of your decapitated face, and then use your skull to decorate the royal palace.

Written by LobodeSanPedro
Published 22nd Jun 2013 | Edited 14th Jan 2018
Like This?
Poems by Author
Comment
All writing remains the property of the author. Don't use it for any purpose without their permission.
likes 7   reading list entries 2
comments 13   reads 776

re: Re: Mino
LobodeSanPedro
22nd Jun 2013 4:46pm
Thank you for the read - your words are always appreciated.

Read poems by LobodeSanPedro
Re: Mino
rain1courtel (RainC)
22nd Jun 2013 9:42pm
My skin midnight in pitch to echo my panther's
"Hair tufted and coarse flows like the savannah
For the Gods greet me with morning whispers
Service and duty to my king is nestled in my womb
The only seed I have ever known
It is sacred
Cherished
Life affirming"
^^^^^ First stanza took me there.....and I never returned! AWESOME!
Just AWESOME! Xoxo

re: Re: Mino
LobodeSanPedro
23rd Jun 2013 7:05am
Thank you for the kind words ... the Mino were truly incredible women.  The strength and beauty of women of color is foretold in their conquests.

Read poems by LobodeSanPedro
Re. Mino
FATBOY300PLUS
28th Mar 2016 00:39am
Nothing like a reminder of how bad Ass an unfettered woman can be. Love this piece and what it keeps unforgotten

Re: Re. Mino
LobodeSanPedro
28th Mar 2016 00:50am
Thanks for the read and RL add ... Learning about these uber women warriors at the time was eye opening for me.

Read poems by LobodeSanPedro
Re. Mino
HowlingWhelms (Noire)
13th Mar 2017 7:19am
Lobo, this is freeing and delicate, I smiled to
at myself in the mirror, it's that sensually beautiful.

Love your inlets. thank you

Re: Re. Mino
LobodeSanPedro
13th Mar 2017 7:31am
If you're smiling at this hour ... then it's a good thing.  Thank you for finding this ink and commenting on it, you helped remind me what beauty and power is. Peace

Kasumba is one Bad Ass - Kick Ass woman! A Uganda born martial artist who speaks French, German, Dutch, and English.  She is truly of Mino descent!