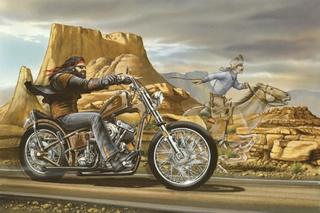 always in trouble, loner on the outside
with his rebel yell & his outlaw pride

one night he spotted thick smoke in the air
an orphans’ home blazing, & no one else there

he ran thru the flames without self-regard
he knew death was easy, only livin was hard

he got 7 kids out, but 1 was still cryin
so he figured: hell, it’s a good night for dyin

the moan was a cat, exclaiming its fright
he tossed it out to the sheltering night

then the house caved in. his vision went black
the fire consumed him. he ain’t comin back

on stormy nights, you still hear his cry
thunder & chrome.   rider in the sky

Written by JohnFeddeler
Published 16th May 2013
Like This?
Poems by Author
Comment
All writing remains the property of the author. Don't use it for any purpose without their permission.
likes 5   reading list entries 3
comments 6   reads 861

Commenting Preference:
The author encourages honest critique.
Re: thunder & chrome
Anonymous
16th May 2013 4:06am
Love this - the beginning of a legend.

Re: thunder & chrome
Magdalena
16th May 2013 7:41am
My brother is a rider in the sky, he used to customize his choppers and was a member of the National Chopper club.

Love this poem blues, it makes me think of him and my Nomad friends. :)

Re: thunder & chrome
marthard
16th May 2013 8:16am
You pack so much into so few words yet keep the flow of ideas and rhythm perfectly. A great achievement.

Re: thunder & chrome
Chiyo (Miss Chi)
1st Oct 2013 7:15am
That's awesome and stirring, JF, it swept me away. Strong and empathetic scribe and a hymn for the lone riders. Will enter my reading list.