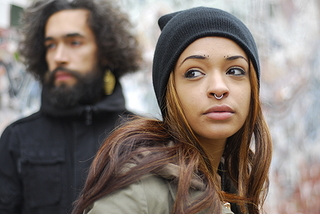 This small-time Bandit; that’s what he told her!
This Young Honey’s crying, had him cursin thinkin he had to reprimand her.
He couldn’t stand it. This Bandit, he was gazing with an almost paternal fixation.
This situation filled and overtaking him with self-incrimination.
The bits of whimpering, the sniveling stemming from the Young Honey
The one to the side… Some of us thinking might’ve been The Young Buck’s bride
Nevertheless, she’s thinking kidnapped, caught up in this Bandit’s issues about money.
But The Bandit, thinking this shit was more than enough…
Enough to work nerves or purge depending upon a felon’s outlook.
It ain’t like there was ever a rule book. Hard enough trying to deal with what he done took .
Chewing-up them reds, them whites and all of them blues. Doin ‘em all by the handfuls
Doing ‘em just to keep sober. The Bandit thinking, never expecting this kinda shit once he got older .
Yet in still, everybody knows shit finds a way to get colder. Wherein a lotta jokers get bolder.
Some get bigger too. That’s all true… and
can be dangerous when it ain’t!

Meanwhile to the other side…this stupid looking Dip; looking like she ‘bout to faint
She’s fanning herself!! Looking rattled by the danger.
This one here is the Store Manager..  She looked to be one of them ass wipes.
One of them ones who be loafing while jerking for shit wipes.
The kind living, dying for that promotion…an amateur
One filled-up with too much emotion. For her it was just too much commotion.
She’s standing still not recognizing what’s real.
Been like that, especially today. But this is what the Bandit had to say!
He told her; this could be your last day
And with that… He told her that fanning shit was enough
Chill or that prediction’s gonna be rough!! Soo…

Some of us right then & there.
We were holding it inside, laughing to ourselves.
Laughing while crouched there on our knees.
All this as this Young Buck, he out the blue then spoke up.
Him trying to be humorous, while trying to please.
Young Buck, he was beside himself cracking his Cracker Jack jokes.
Most of ‘em focused on the Store’s Manager.
Pointing out how this Manager, this Manager,
How he knew and could tell about her little coke buzz
Then the Young Buck started busting up about what she does.
Passing along a thought how she never gets caught
This was obviously to everyone present an additional source to The Manager’s irritation .
Panicky, feeling uneasy.. She now too was yelling...

The Young Buck with a comeback just as fast
Him spittin’ “Screw YOU flat ass!!!”

This was part of his routine.
Compared to the Bandit, the Young Buck was 10x as mean .
With his eyes moving from the Young Honey back to their captor
Considering the situation, Young Buck was chilled like a Raptor
Him saying, YO, cuz...me & mine don’t care bout what you after .
We just wanna do our thing like we do each spring .
Wasn’t trying to interrupt your capers. Me and the Young Honey..
We were just trying to cop some papers. I’m sure…you know, you remember?
Every time, this time of year…it's a spring fling.
And we’re trying to get what we can get.
Indulging keeping it light & tight without any regret.
YO cuz, I’m sure you been there;
like back in the day . I’m more than sure you were knee deep in it .
You, your best girl; y’all probably got real good in it… Least I suspect.
Probably rolled like real nice folk… with or without the Tech
Back then, y’all probably on that High-End stroke?
Like I said…Nice folk.

Once again the Bandit released a profane volley,
Wherein the Young Buck came back saying he was sorry. Sayin YO cuz,
I apologize, that’s just another bad cracker joke.
Real sorry I spoke must’ve been that last toke; but cuz
Why don’t you do us a favor?? How about you lowering that Tech!!
Sorry cuz, you know that sometimes my tongue. It’s the foremost thing I need to neglect.
So look here… no disrespect . But I do think we making my Young Honey a bit anxious .
She’s a little prone to being a bit nervous.
So we wishing you’d go ahead . Not unless you fixing to serve us.
Because you be right about them cracker jokes . They really ain’t that funny no how.

This again was the Bandit. The Bandit and what he had demanded…
right before the Young Buck’s Honey.
Right before she blew her nose…and still it was all runny .
Right before she took that good aim on the Bandit’s head.
Young Honey, she peeled it back real good…made ‘em real dead!!
Wherein Young Buck, he put his index finger to his lips
Him now saying that enough had been enough
And a damn shame how The Bandit had made it rough

Written by kriticool
Published 15th May 2013
Like This?
Poems by Author
Comment
All writing remains the property of the author. Don't use it for any purpose without their permission.
likes 3   reading list entries 0
comments 4   reads 548
Commenting Preference:
The author encourages honest critique.
Re: .:Crack Her Jokes:.
Anonymous
15th May 2013 10:10am
Human condition in microcosm...what characters kriticool