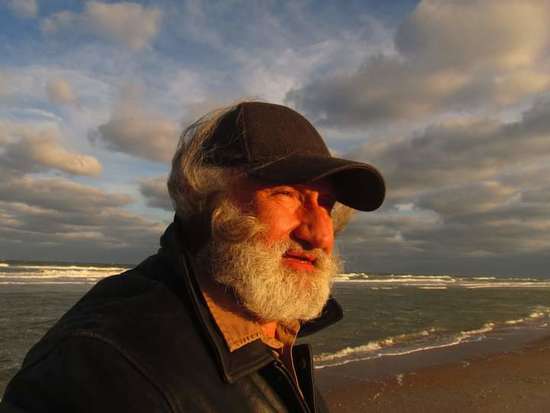 Where he loved to be. The beach. Taking photos and playing with Alice.

The Dead Practice Death (better get The Hang of it ! )


Loved his sense of humor. 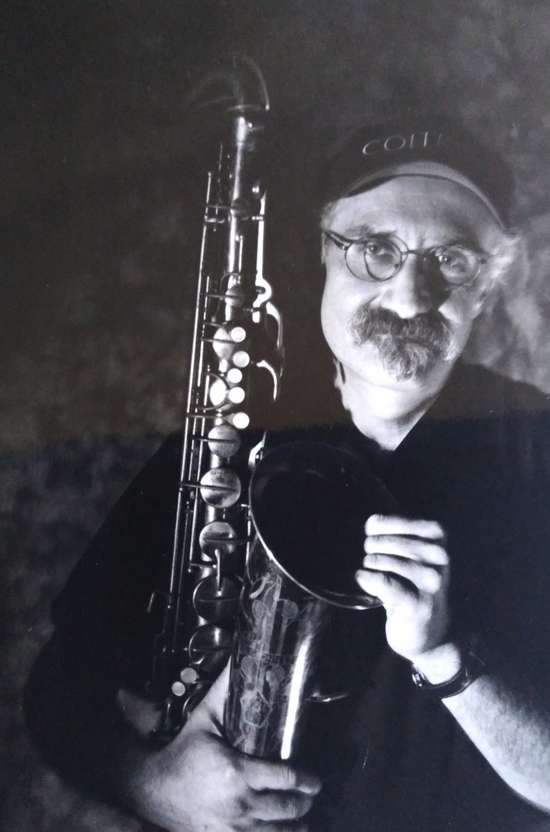 Thank you for sharing, everyone. <3

I remember when we were creating his book he was sending me all sorts of things in the mail. The CD's are wonderful. I didn't even know he had any made. 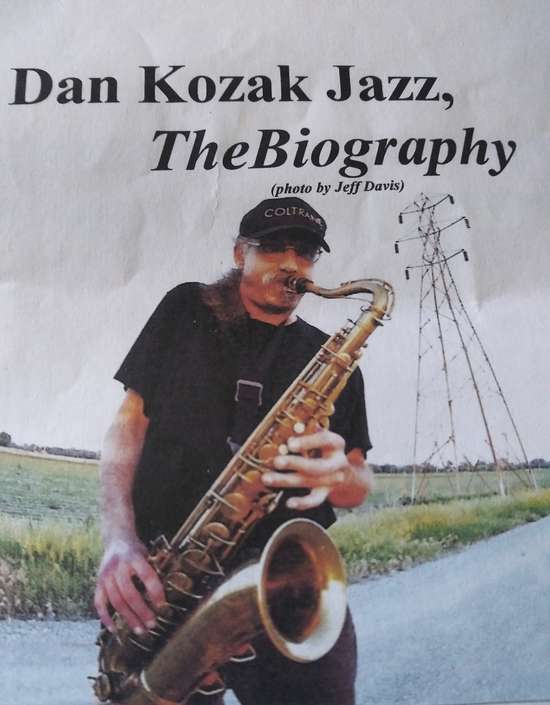 Dan Kozak came to being into he enchanted land known as Brooklyn, New York way back in the 1950's. In his mid-teens he became an obsessive collector of all sorts of musical recordings. At age 15, he fell prey to the works of John Coltrane, & jazz then became the centerpiece of his musical addiction.

In 1971, for reasons no one can recall, Dan fond himself in Kansas. On a lark, Dan decided to check out the instrument of his idol, & rented a tenor sax. He took to it rather quickly, & with a vast music collection at his disposal, developed a deeper passion for the heritage of jazz. Dan strives to convey the love & passion for this music at every performance.

In 1991, he decided to take things into his own hands, & began leading groups made up of many fine players from Topeka & Lawrence.

In 1996, Dan founded, produced, directed & performed the annual Coleman Hawkins Neighborhood Festival, Twice-annual Jazz at Grace Concert Series, Spirit of Jazz Concert Series as well as produced-hosted The Jazz Show on KDVV-FM until 1996. He also produced-hosted Classics on Oldies 102.9 FM until 1999. He also loved producing & directing the music for the Kansas River Valley Art Fair between 1997 - 1999.

He was such an integral part of the arts and the former as well as current musicians he touched are paying wonderful homages.

You can find some of Dan's compositions on Youtube:

Dan crawled into DUP December 10, 2011 - making him a true Legend of the Underworld. He graced us with his own unique style of poetry which will forever go unmatched in wit, form, and content. He was truly a master of neologism.

he came across as a seasoned & uniquely freeversing freesoul dadaistic poet.. a selfless poetic soul reaching syncing with us...

had very little yet indelible poetic interactions with him long time back... never to forget his earnest warm reads words & his verses that uproariously tide high as unceasing waves after waves.. so in humanistic emotional intellectual soulful ebullience..

juz to add lil tidbit, his funky lotzz of xxzxzz in his profile name & poetry.. reminds me of my own affinity towards zzzz & an Indian actor #DannyDenzongpa ..

tha vacuum he left here in du .. is unfillable . the eternity & legend of words had touched, touches & ev will do so .. light & love adored poet.. in his luminous lightness cosmic traverse .. as i ev say feel , death is juz a point. that flows as .... dots of birth~ rebirthing continuum..  & in love , there is nev ev a death . .. 🙏 touching  tribute & words & pic  by fellow du.zz

When I lay upon my deathbed
And ponder all the words left to ears unsaid
To the world I give of my beautiful musings, read upon the scrolls of my creed
To give honor in its reprimand for those who refused to see
Inhaling the air my Creator has anointed
To the souls who I’ve witnessed desecrate in such a disappointment

Were my arms always receptive, huggable as they remained open
To give unconditional love when minds deny the existence of their soul to become awoken
Did my skin color elevate in the wake of earthly chaos
When hatred, bigotry, and racial diversity politically tossed
Lives lost, did I demand change at all cost

Did my eyes see man’s technology as a weaponry few would never understand
Was my voice heard in union to love one another echoed across the great lands
My heart, was it always in the right place
To accept humanity no matter the gender or race
Did I sing to the children with melodies of kindness, respect, giving them a sense of hope
Prepare their intellect for life, give them aspirations for their dreams to promote

Was my Temple of purity governed in its truest state
An example of unselfishness to surrender in love when it came for me to procreate
The rules of forgiveness and its principles, was I a law-abiding citizen
Listen to the sermons of Theology to forsake the temptation of sins time and time again
I looked down at my trembling hands, my breathing has become shallow and labored
Until the cradle of my coffin I shall now rest like a sleeping baby in a manger

To my eyes I look up prepared, I can clearly see that beaming light, as I come to understand
The energy is not in the tongue to speak iniquity, but to love like the flow of timeless sand
In remembrance to look back and ask of yourself was I this woman or man
I can now close my eyes in reverent peace, cry for me no more as tears come to silently weep
My earthly vessel shall lay in wake, reprieved
As the spirit of my soul has now been divinely received

In humble dedication to a DUP poet who has received his beautiful wings, RIP (dkzksaxxas_DanielX)
Written by SweetKittyCat5
Go To Page

as if your Mother's back

( but not your Dada's - him's
been ruled an exception, being
the most exceptional of fools ) 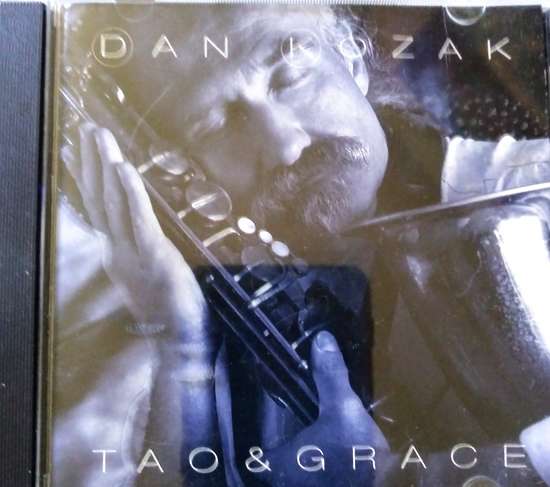 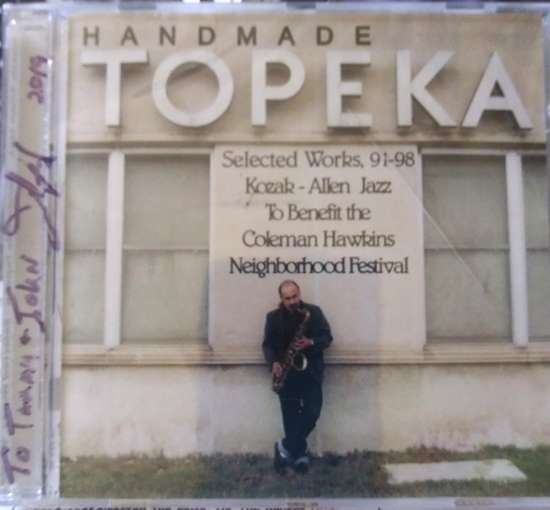 us to love and laugh
while we breathe;

teach us tradition
and appreciation;

teach us to cook
clean, and save;

teach us to extend
mercy and grace;

teach us to say no
to what we do not need;

teach us to accept
death as a beginning; 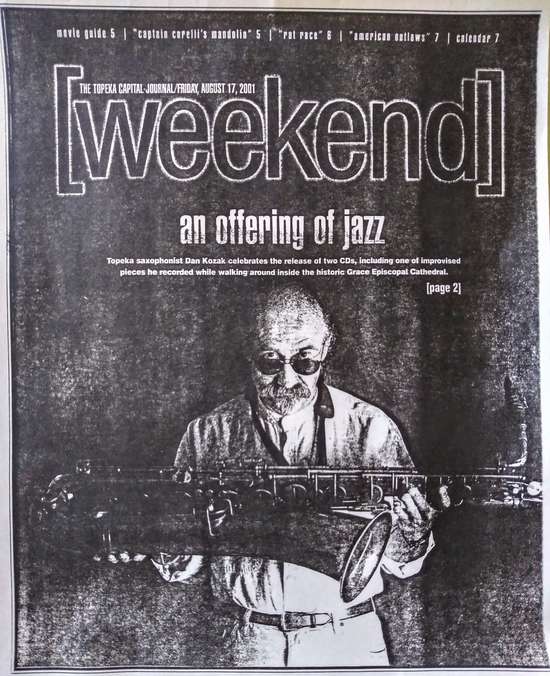 Topeka saxophonist Dan Kozak celebrates the release of two CD's, including one of improvised pieces he recorded while walking around inside the historic Grace Episcopal Cathedral.

Forget god. Yes forget.
make'up a little dance of your own.
For whatever it's worth.
Like the Centennial of the Sandohog's labors
bringing billions'o gallons
of crisp waters to suffering NYC,
(Crown Jewel of the Hemispheric North.

And the labor's labor on and on,
the tricks as visible as the trash site
of the local trashing.

There's no relative truth that goes wit
this hunger, but the dance may be
an able posture of
possession, of
potential , of
the process of
of seeing the relative of a  blessed, wholly invaluable ,
state of stillness , taking it's time,
as is fulfilling, knowing
knowing the constancy on poeting
the state of this overwhelmed mind,
settling for the action of no more,
for now'ever.


This undoubtedly is one of my Top 10 Kozaks.

Even in his final month, he was literarilly kicking ass. 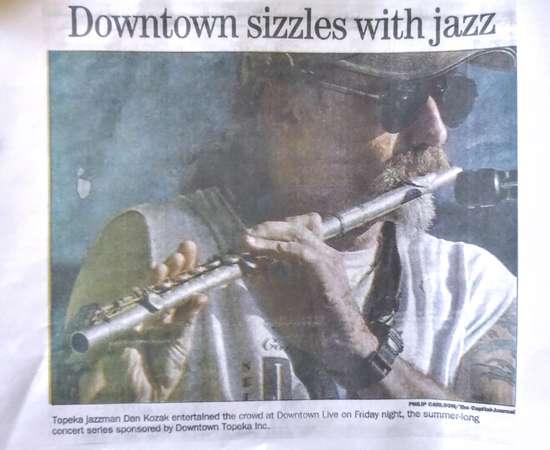 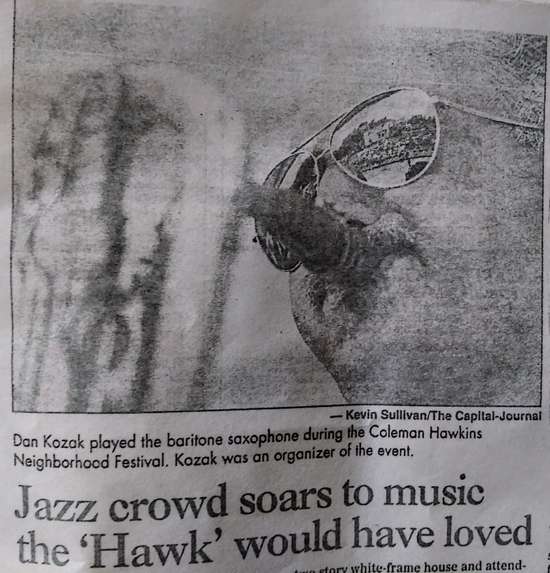 Dan Kozak played the baritone saxophone during the Coleman Hawkins Neighborhood Festival. Kozak was an organizer of the event.

Anonymous
Rest in peace Dada...
Your works carry weight that became many a times unbearable for the reader  ...

DU not the same anymore.