Joined 11th Apr 2015
Forum Posts: 10485
Sex_on_the_Joe said:I will be double posting today. I am a little under the weather but I won't let that knock me out of the box that easily.

Fantastic, Joe! ( That you're not out, not that you're not feeling well. ) Please follow the guidelines for double posting, and feel better soon. Don't  hesitate to reach out to a team member if you need some special encouragement or guidance.

That's the spirit! Thank you for showing how it's done! (And get well soon)

Joined 29th July 2018
Forum Posts: 550
Sex_on_the_Joe said:I will be double posting today. I am a little under the weather but I won't let that knock me out of the box that easily.

Glad to see you hanging in there! I hope you get to feeling better 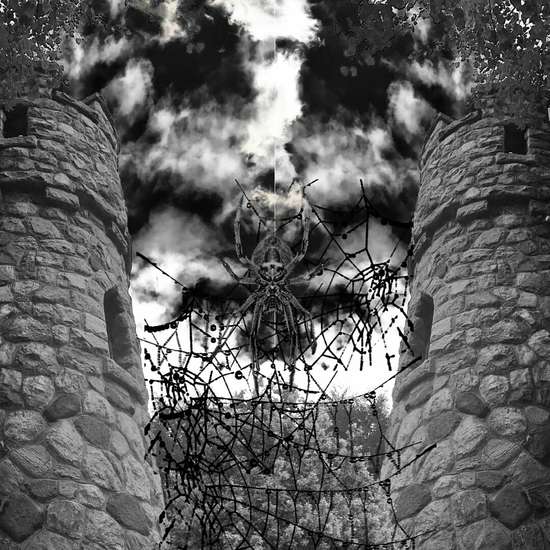 "The Two Point O Towers you say," said Harry the Weregroundhog. "Why, that's like just up the road a little ways. Follow me!"

And the Fellowship did, approaching two filthy, stone towers with a massive spiderweb stretched between the both. And there in the middle of the webbing was a huge, glowing orb with a pupil smack dab in its center. As the sun had already gone down, a beam of light eminated from the Eye of DUPon much like that of a lighthouse. She was tirelessly scanning the lands to the south, always in search of The One Poem ™.

"If we approach her from the side, she won't see us coming and alert the Porks in the towers," said Summdir.

It was just then that upon the clouds appeared another similar light with the symbol of a Bat in it. This was the calling card of the Dark Knight!

"Oh, nos!" cried Lady Ahavarwen. "DUGlo and the others can travel no further without being seen. We must find a way to distract the Eye of DUPon as soon as possible!"

"We'll need the help of the Dwarves," said Melrond. But why were they still lingering in the forest?

"Dwarves, you say?" inquired Harry. "Like, did they happen to investigate something that was shiny-like in the woods?"

"Yes!" they all chimed together.

"Uh-oh," said the monstrous Groundhog. "My cousin, Larry, is always setting traps in the woods to ensnare travellers on the road. He's a bloodthirsty Werebadger who is probably eating your Dwarves at this very moment."

Smuggle laughed maniacally to Duggle. You were right afterall!

The Dark Knight aimed his Bat Signaling Runestone at the clouds, waiting impatiently for a response from the other Fellowshippers signaling it was okay to proceed.

"Ohhh! I wish they would hurry!" exclaimed Satin Gamjeez as he climbed further up the nearest of the Musty Mountains. "Those Nasty Ghoulies sure do give me the frights!"

There, below in Stanza Valley, the Nine Poemwraiths had just begun their rendition of Michael Jackson's Thriller. It was only a matter of time and choreography before the Ditch King would give the command to strike!

DUGlo's worst fears had manifested: they were discovered because he was glowing phenomenally bright.

The Eye of DUPon likewise witnessed the curious bat-shaped light anomaly on the clouds. It seemed so ... familiar . . .

And then a bizarre thought occured to her:

"We must save the Dwarves first!" instructed Jaragorn. "We will not abandon them to torment and death."

And he whispered into John Ronald's ear in the ancient tongue of his ancestors, the Numeralians. At hearing the command, the Donkey leapt into action ( with Smuggle and Duggle bouncing around in the saddle ).

"Oh, fishystickses!" grumbled Smuggle, as the Donkey beelined into the woods towards where the Dwarves wandered off into. 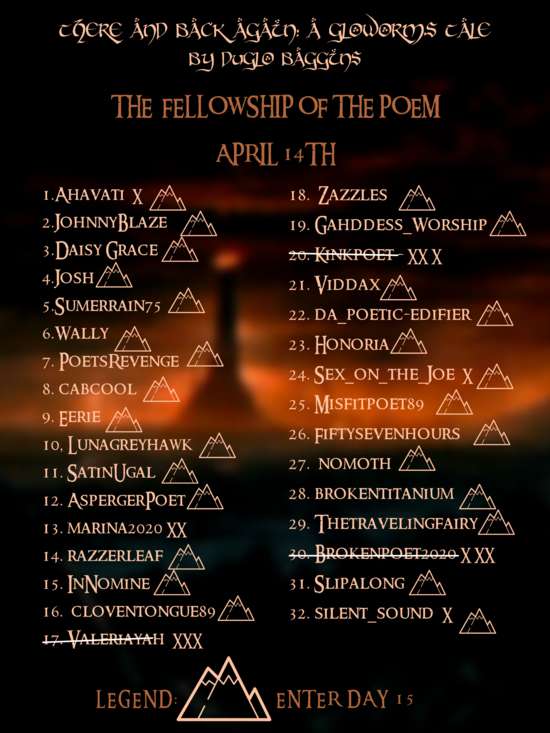 Greetings, Great Poets of the Fellowship! Welcome to the Challenge Summit! Those who have a clear view may proceed into the halfway mark of Day 15!

Those who do not have a 24 hour window to edit/and or submit those late poems! You've come this far, we know you can do eeet! 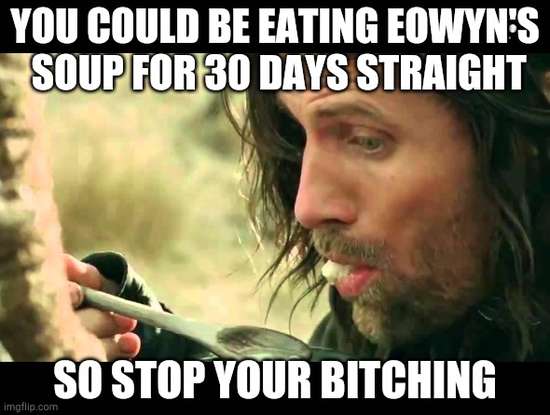 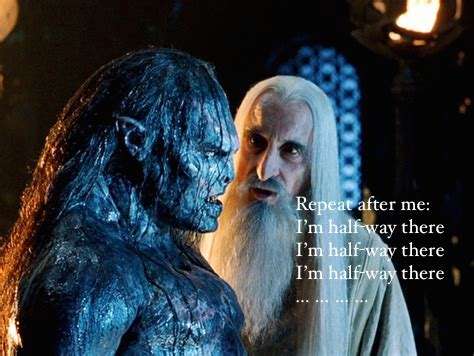 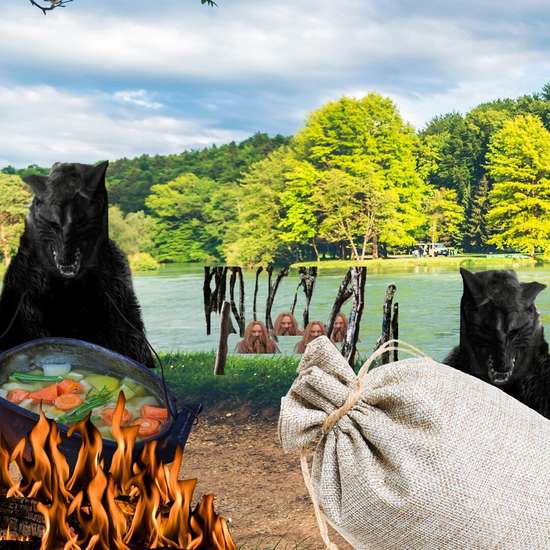 It would have been a comical sight if the situation wasn't so dire.

The Dwarves were up to their bearded chins in cold water, standing in the dammed up waters of the Forked Up River. A huge wall of logs prevent the waters from flowing down a hill, while they were imprisoned by tree limbs tied   into a makeshift cell.

Nearby on dry land, Larry the Werebadger stoked a fire underneath a cauldron of boiling water.

"The key to cooking Dwarf is boiling them alive like Mudbugs, but only after a long, cold soak," said the mighty, striped beast. "It excites the juicy parts and enhances any armpit aromas."

Barry the Werebeaver heavily objected. "I'm starving! Let's just squash the little buggers into jelly pies and be done with it already!"

"Hey!" shouted slipalong. "Why don't you foul animals go jump in a lake!"

Many a Dwarf groaned, as they were already up to their necks in water themselves.

"Really?" grumbled brokentitanium "Is that best you could do?"

"Com'on! We're suppose to be poets!" insisted Misfitpoet89. "We can do better!"

The Werebadger towering above began poking at them with a stick to see which of the Dwarves was the plumpest. "Is it juicy? Is it ripe? Is it scrummmmmptious?" he asked.

Many a Dwarf cheered! Sometimes it takes a situation of duress for one to finally tap into their poetic side.

"Don't fret, Mates," said Zazzles. "The others will rescue us any minute now. They always do. You'll see."

Unfortunately, not long afterwards, their optimism was dashed liked a sprinkling of paprika as homophonous Harry lumbered into the clearing dragging a large, burlap satchel. He lifted up the ceiling of wooden prison over the heads of the Dwarves and dumped the remaining members of the Fellowship out of the bag into the chilly river water.

"Hahaha!" laughed the giant Werewoodchuck. "Fooled you, didn't we? And it was like taking candy from a baby troll!"

"Ganjosh!" cried Ghaddess_Worship in despair. "What in the realm of Muddle Earth shall we do now?!" NaPoWriMo seemed like a faraway dream.

The Gray Gecko shrugged his shoulders with a slight splash, at an absolute loss for a course of action that would free them. His magic staff was still somewhere in the burlap bag!

"No worries," said Jaragorn, spitting out a mouthful of water. He was quite confident that everything would turn out alright.

Ahavarwen added, "Besides, this is good practice. It wouldn't be NaPoWriMo if someone wasn't trying to eat us!" 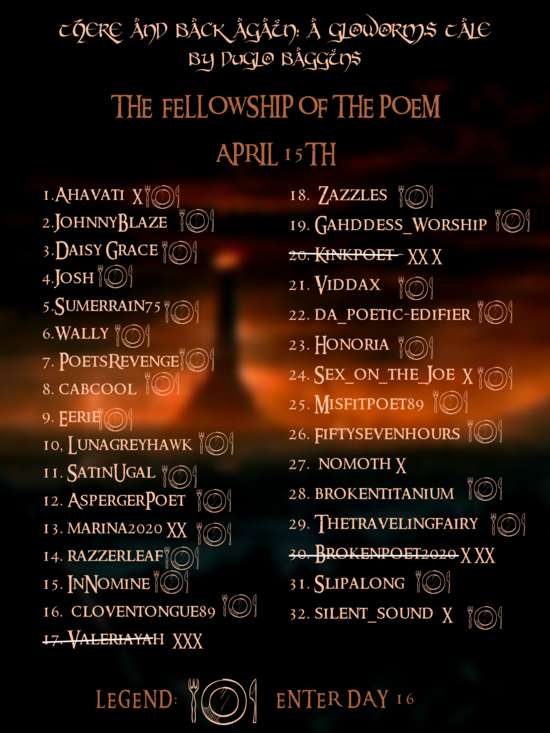 Greetings, Great Poets of the Fellowship! A banquet has been prepared for you to officially celebrate the halfway mark! Congratulations to all who've made it thus far. 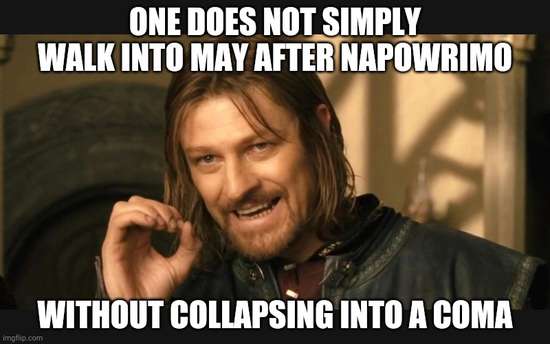 Dwarves, we know you are getting tired, but you can do it!

Joined 24th Mar 2019
Forum Posts: 441
Sorry guys but I may have to bow out. have not been too great last couple of days but had some really encouraging news about my photos which I will be concentrating on for a while. I send all my luck, inspiration and treasure-depth diving discoveries  to all you guys for the rest of the monthxx


also will be taking a brief hiatus. so take care and stay safe everyonex

Joined 29th July 2018
Forum Posts: 550
nomoth said:Sorry guys but I may have to bow out. have not been too great last couple of days but had some really encouraging news about my photos which I will be concentrating on for a while. I send all my luck, inspiration and treasure-depth diving discoveries  to all you guys for the rest of the monthxx


also will be taking a brief hiatus. so take care and stay safe everyonex

We will missssss yoouuuuu!!
Good luck with your photos! Don't stay gone for too long :)

We will missssss yoouuuuu!!
Good luck with your photos! Don't stay gone for too long :)

Thank Eeriex I'll miss you too.

PS You are doing fucking awesome this year my gods:)