Joined 20th Mar 2015
Forum Posts: 5005
Thetravelingfairy said:Greetings fellowship, I have posted my 5th poem on the 6th day (very very early) due to a stressful and event filled day involving pets. I hope I published everything correctly.. Just wanted to give some explanation (also included in poem post).

You did it perfectly! And we appreciate the additional heads up.

My other accounts at DUP are Magnetron , Anarchitect , Psycotic Mastermind , & Mary Walker
Posted: 6th April 2021 11:53am 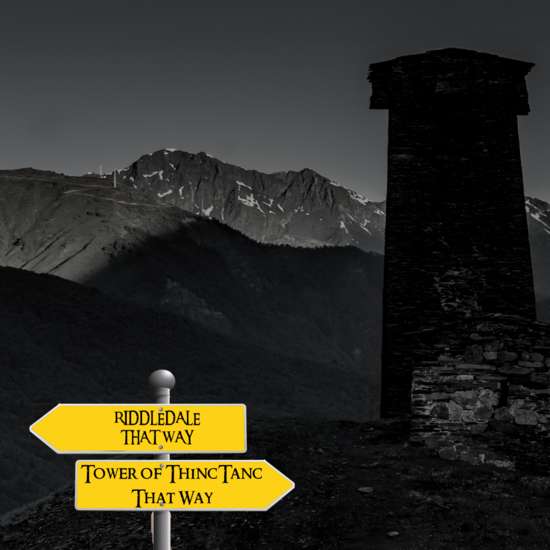 "A Wyrm lay here," said Jaragorn in the throes of discovery, pointing to the ground underneath Ahavarwen's magnifying quartz. "He struggled at the hands of two amphibious creatures." The Ranger dashed twenty yards to the north. "They dragged him kicking and screaming over here . . ."

"Right," said Ahavarwen in exasperation. "Because a few crushed blades of grass can tell you there was screaming. And besides, Glowyrms have no legs to kick with . . ?"

Jaragorn crawled on his hands and knees a few yards to the east and said, "There! His abductors paused to have an argument over what to do with DUGlo once they removed The One Poem ™ from his neck chain. One wanted to broil him on a shish kebob; the other wanted to boil him, then mash him, and stick him in a stew."

And if this wasn't enough nonsense to swallow, he finished by saying, "Then ... that's when a large bat-like creature descended from the forest canopy and spirited Mister Baggins away to its lair!"

Ahavarwen just glared, tapping her foot, with her arms crossed. "And you base this on what exactly?"

Jaragorn pointed up, replying, "Because said creature is currently perched fifty feet above our heads and is eyeballing you with ill intent."

Cool Dude Merry emptied water out of his guitar while Summdir used her Elvish blades to peel huge Leeches off of the Dwarves.

Rosie Grace dragged a waterlogged Satin Gamgeez from the Brandy Wine River ® onto the eastern bank. For a personal trainer, he was surprisingly out of shape. Being stressed with worry over Mister DUGlo wasn't helping.

John Ronald whinnied, missing his newfound Wyrmy companion, while Eerowyn wrung the water out of his tail.

"We haven't much time," informed PRadriel, whose white gown oddly was dry and shimmery as ever amongst the slew of filthy, soggy Dwarves. She pointed across to the western bank where the Nasty Ghoulies gathered, now shuffling around low to the ground and snapping their fingers. "The sun has almost disappeared and their rendition of West Side Story is a terrible thing to behold in the moonlight."

The Fellowship hoofed it on foot towards ThincTanc, carrying the Donkeys on their backs because the poor animals were tuckered out from all that paddling ashore.

The Nasty Ghoulies shrieked in frustration that their dance techniques were not intimidating enough without the power of The One Poem ™ in their Master's possession. They mounted their miniature black steeds and headed downriver to find a bridge to cross.

Upon reaching the mighty, black tower carved out of absurdian, Ganjosh reminisced, "Back in ThincTanc's heydey, the great Rainbow Coalition of Lizards held monthly councils here. We brainstormed up ideas on how to make Muddle Earth a more brighter, cheerful realm."

However, as they entered the front door that was left wide open, now it seemed to be deserted and fallen into neglect, sorely in need of a good dusting. And when they entered into the great oval hall, they were greeted by the strangest council meeting ever to take place in the tower's history.

Salamandar the White sat at the head of the table surrounded by a department store mannequin wearing red lingerie, a cardboard cutout of Aquaman, a life-sized replica of C3PO, a stuffed raccoon sporting a monocle, and a potted cactus.

"Greetings, Fellowship!" hailed Salamandar the White. "We were just discussing what to eat for the Superbowl party - spicy chicken wings or fondue dipped nachos."

Gimlyroo whispered in to Lunalass's ear, "I REALLY don't have a good feeling about this." 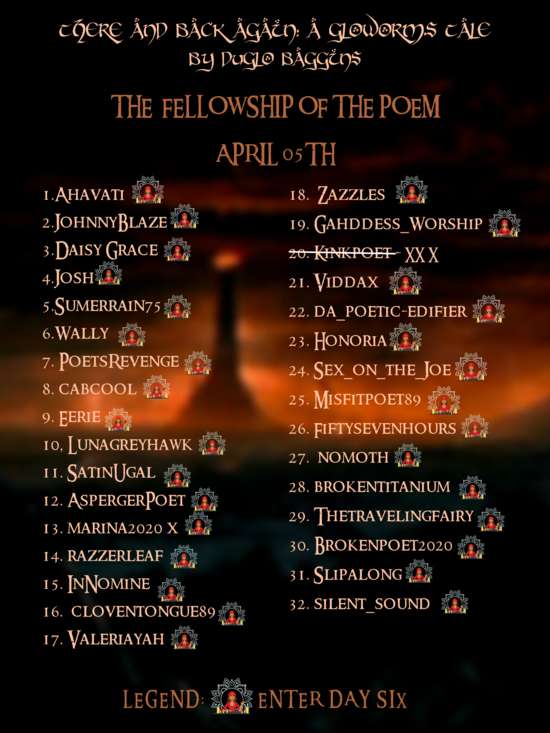 Greetings, Great Poets! If the Oracle has deemed you fit for battle, you may enter Day Six of the Challenge! 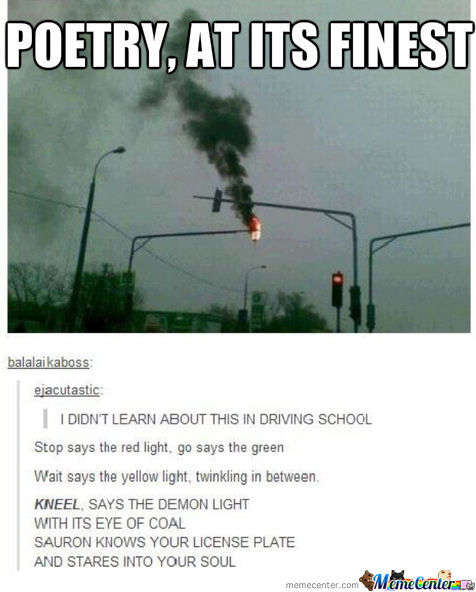 I’m not saying sauron is tracking us....

But sauron is totally tracking us.

But sauron is totally tracking us.

Oh, yeah. And don't even think about blowing through the interstate tollbooth without your EYE-PASS or you'll get hefty fines in the mail.

Oh, yeah. And don't even think about blowing through the interstate tollbooth without your EYE-PASS or you'll get hefty fines in the mail.

Joined 1st Jan 2018
Forum Posts: 553
I have a poem in draft,  if I  put it in Na Po Wri Mo comp and then put it on my poems page and then submit it to a competition is that acceptable regards Slip

Joined 11th Apr 2015
Forum Posts: 10360
slipalong said:I have a poem in draft,  if I  put it in Na Po Wri Mo comp and then put it on my poems page and then submit it to a competition is that acceptable regards Slip

Yes; as long as it is already a poem submitted to the NaPo competition, you may submit it to any other competition.


Are we allowed to say fuck like fucking asshole in NaPo ? And I posted a poem in my own profile

Can I submit it in NaPo when it’s my time zone unpolished? ?

Sure, but try not to go overboard.

Per the rules, we wish to discourage poems that only make an impact through "shock value".

PLEASE use common sense. Your poetry, unpolished or otherwise, is a reflection of the overall talent being fostered by DUP. We would hate to see outside readers, potential members, or even publishers turned away by material meant to garner attention purely from shock value. Don't be a shock jock.

And if you do go overboard, it runs the risk of being classified as "Extreme Content" by the moderators. Because this is an Official DUP event, it must remain open to all ages. Meaning, such an entry will be removed by the moderators to keep the comp viewable to everyone. You will lose your opportunity to edit it and thus disqualify yourself from the competition because there is no reposting.

Therefore ... a little swearing is natural, but DON'T OVERDO IT at your own risk.

Zazzles said:
And I posted a poem in my own profile

Can I submit it in NaPo when it’s my time zone unpolished? ?

Sorry, but it needs to be the other way around.

Post it in the NaPo comp first, then to your profile.

Sorry, but it needs to be the other way around.

Post it in the NaPo comp first, then to your profile. 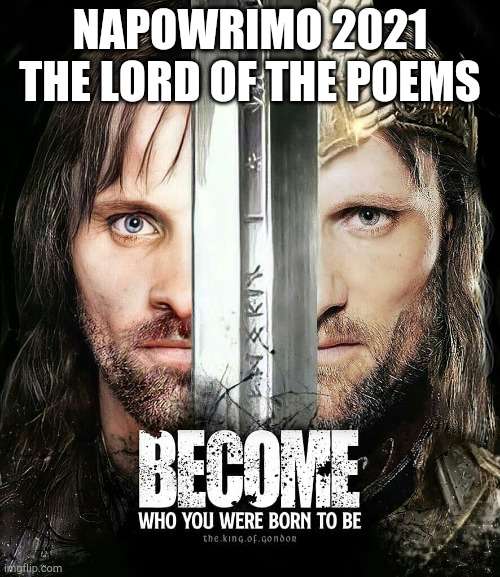 "Are you writin'? Not nearly writin' enough!"