A movie everyone should watch. Everyone can learn lessons from this one "Seven Pounds"

Joined 20th Mar 2015
Forum Posts: 3573
Next week, Netflix will be streaming a limited series titled The Queen's Gambit. The previews tout taglines such as "Genius and Madness" and "Creatiivity and Psychosis go hand in hand" ( which oddly enough, echoes Luna's comp "Touched by Fire" currently underway ). And it is about Chess.

Also now on Netflix is the final season of The 100.

For the moment, Hulu has The Terminator: Dark Fate which is pretty kick ass and Gemini Man starring both Will Smith and Will ... Smith.

The latest Pet Sematary for you Stephen King fans, which is a lot creepier than the original.

And Mary Shelley, about the author of "Frankenstein".

Joined 20th Mar 2015
Forum Posts: 3573
If you are looking to watch some classic movies for Halloween, there's a new free channel called Peacock which is owned by NBC. All you need to access ( on Roku ) is an email address and a password.

A quick browse showed they have Frankenstein , Dracula , Nosferatu , and Psycho.

Rookie Historian was good, as was Love Alarm; however, the latter is an ongoing series, and I would rather binge watch!

I cannot explain my fascination with this genre, except to say I have some connection to the Asian world that's deep and pulling. It's what even prompted me to purchase bamboo brushes, and use Sumi ink vs India as most artists do.

I think I will learn the Korean language, being I've already picked up a good bit of it watching these dramas. 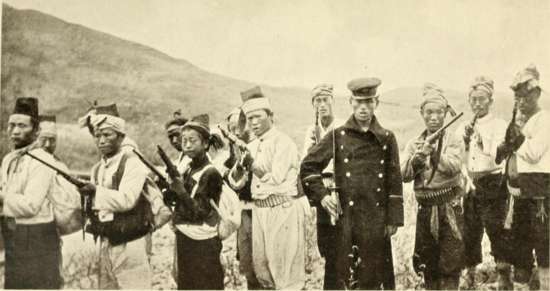 Image:Company of Korean rebels photographed 1907 by F.A. McKenzie opposite page 206 of Tragedy of Korea published 1908; lossily rotated -0.35 degrees and then losslessly cropped tighter.

So I finished Mr. Sunshine last night. I think one of the reasons I was attracted to that movie is the historical fiction aspect of it. It's my fav genre despite film or book. The much-anticipated show, written by star writer Kim Eun-sook, has been accused of being an apologist for pro-Japanese collaborators before Japan's colonial rule of Korea as well as being based on historical inaccuracies.

Historical fiction is just that: a blend of fiction and non-fiction. Believe me, if the director was an apologist for pro-Japanese collaboraters ( even through one character ) it didn't show in the film. On the contrary, it painted them in the most horrible light possible. Despite that, there would be a genuine imbalance from someone raised in one set of beliefs attempting to reconcile with another. I thought the character accused of romanticizing Japan ( Koo Dong-mae ) did an excellent job portraying his character, and the ending recognizes that in his actions. Can't say more or I'll ruin the ending.

It's an an epic tale of love and heroism, and the cinematography is beautiful. I highly recommend it. Watching it late at night without distraction is best due to subtitles, unless you can speak Korean ( which I am working on )!

The journalist/photographer was featured in the film, and the photograph is genuine.


My other accounts at DUP are Magnetron , Anarchitect , Psycotic Mastermind , & Mary Walker
Posted: 26th October 2020 7:43am