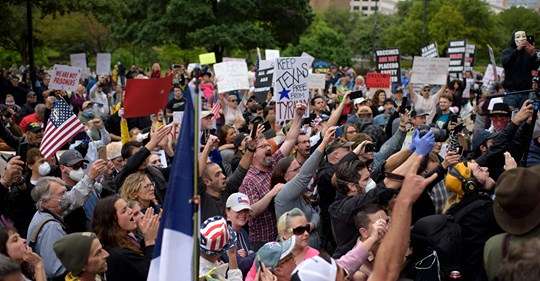 What planet am I on? No one has been 'scapegoated'. Some in America are becoming a parody of a parody of themselves.

On the protest's Facebook event page, organizers wrote that bars had been scapegoated for the state's rise in newly confirmed coronavirus cases.

IT'S OKAY TO WEAR MASKS AT A PROTEST, BUT NOT IN A BAR!

Joined 11th Apr 2015
Forum Posts: 7095
^ Right? I guess it's kinda hard to hit up on chicks or understand slurry speech with a mask on. Not to mention being able to drink with one hand and grope with another.

Meanwhile. . .looks like someone's anti-mask wearing has come back to bite him in the buttock. ( Making it all about himself, of course. )

President Donald Trump says he's embracing the use of masks and facial coverings as coronavirus cases continue to spike around the country.

I'm all for masksŚI think masks are good" Trump told Fox Business in an interview that aired Wednesday. "I've had a mask on, and I sort of liked the way I looked."

Trump, who has stopped short of calling for a national mask mandate, said that when wearing one he "looked like the Lone Ranger," although the popular Western character wore a mask around his eyes, not as a mouth and nose covering, which is recommended to prevent coronavirus transmission. 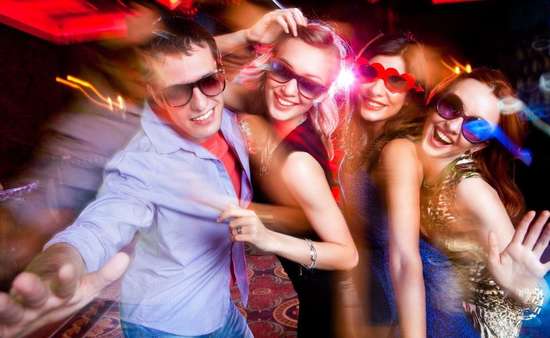 There's a saying about hell and a handbasket. . .

Teens Are Hosting Coronavirus Infection Parties: "Whoever Gets COVID First Gets the Pot"

In case teens are hanging out with their friends without wearing masks or social distancing wasnÆt harmful enough, apparently now students in Tuscaloosa, Alabama, are throwing coronavirus parties Ś according to Tuscaloosa City Councilor Sonya McKinstry. McKinstry spoke with ABC News about this recent reckless behavior, and noted that to make matters worse, the kids even turned it into a game: If youÆre the first student to get infected, you win a cash prize.

McKinstry says that the organizers of these parties are purposely inviting students who have been diagnosed with COVID-19. ōThey put money in a pot and they try to get COVID. Whoever gets COVID first gets the pot. It makes no sense,ö McKinstry told ABC News. ōTheyÆre intentionally doing it.ö

Joined 20th Mar 2015
Forum Posts: 3135
^ It makes all the sense in the world if they were raised by stupid parents.  There is such a reality disconnect in this country. It's the most plausible explanation. Kids do a lot of foolish, dangerous things but this takes the cake.

Joined 3rd July 2020
Forum Posts: 1
oh.. after this will be over people will need a lot of time to recover and return to normal life.. I mean now we always have to wear face masks,to carry with us anywhere we go antibacterial gels and so on. We have to avoid people gatherings and even people who are just strangers to us. It is very different from how we behaved one year ago... Nowadays masks are everything.. I even ordered myself a whole pack of KN95 masks, just in case.. That's the site where i ordered them, if anyone needs https://www.18650batterystore.com/KN95-p/kn95-mask-10pack.htm

I think you would be surprised , Tim...

Normal is embedded in people's consciousness

It will happen almost overnight , by my feeling...

What a true national idiot Trump ,
his political allies , and his followers ,
are showing themselves to be...

Time for a coup stick...

When things get this messed up, I tend to look for the potential conflicts of interest. By which I mean, who stands to make money from slamming the use of hydroxychloroquine, which is a generic drug thatÆs been around since 1934 and costs about Ż7 for a bottle of 60 tablets?
In this case, first, itÆs those companies who make the hugely expensive antiviral drugs such as Gilead SciencesÆ remdesivir, which, in the US, costs $2,340 for a typical five-day course. Second, itÆs the companies that are striving to get a vaccine to market. There are billions and billions of dollars at stake here.
In this world, cheap drugs such as hydroxychloroquine donÆt stand much chance. Neither do cheap vitamins, such as vitamin C and vitamin D. Do they have benefits for Covid-19 sufferers? IÆm sure they do. Will such benefits be dismissed in studies that have been carefully manipulated to ensure they donÆt work? Of course. Remember these words: "Pharmaceutical companies are so financially powerful today, and are able to use such methodologies, as to have us accept papers which are apparently methodologically perfect, but which, in reality, manage to conclude what they want them to conclude.ö
Unless and until governments and medical bodies act decisively to permanently sever the financial ties between researchers and Big Pharma, these distortions and manipulations in the pursuit of Big Profit will continue.
And We will continue to just bitch whine and moan
bending our backs
to pay the bills
for the pills
Sad World

Joined 11th Apr 2015
Forum Posts: 7095
Blackwolf said:What a true national idiot Trump ,
his political allies , and his followers ,
are showing themselves to be...

Time for a coup stick...

I saw a meme today with Trumps face chiseled in. It literally turned my stomach.

Whereas , here is a monument , to one who truly deserved it :

As Congress is headed for an 11-day crunch to agree on a new rescue package and have it signed by President Trump before a key provision of the $2.2 trillion CARES Act expiresŚwith millions of Americans unemployed and new cases of the coronavirus soaring to alarming levelsŚhereÆs whatÆs at stake in the next round of legislation.

Stimulus checks: President Trump said this week he supports sending another round of direct payments to Americans, as do many Democrats; RepublicansŚwary of additional government spendingŚare divided on the issue.

House lawmakers unanimously passed the extension less than a day after the program expired, and PPP will now remain open to applications through August 8.

The President's approval of the measure completes a whirlwind few days for a program that was all but certain to shutter until bipartisan negotiations were sparked in the Senate on Tuesday.

Congress created the program in March to help small businesses keep employees on their payrolls through nationwide closures amid the coronavirus pandemic.

More than 4.8 million small business owners have tapped more than $520 billion in potentially forgivable loans through the program.

The program was so critical at its inception that a first round of funding dried up in fewer than two weeks in April and had to be replenished.

But interest in the program waned in recent weeks, as shifting rules and the inability of borrowers to come back for a second loan limited the number of small businesses able to go through the application process.

At the time of the program's closure on Tuesday, more than $130 billion in allocated funds remained unused.

Negotiations are underway among lawmakers of how to get the smaller, hardest-hit businesses to tap into a second round of aid.