Joined 17th Sep 2019
Forum Posts: 868
the5thRiddler said:I’ve been lucky to only experience some real crazy stuff from my sisters baby-father.
Thinking about it all now I’m away from everything, I should have got out of that flat a lot sooner, and quit sticking up for my sister, as she was only playing us off against each other. Both lie to themselves, not only social services, and that’s what makes them really dangerous.
I regret not saying what I should have, all because of worrying about my safety; selfish in a way I know, as that wasn’t helping the girls when I had the chance, but they’ll soon see, and seek revenge if they want it. And I wouldn’t blame them.

To this day, I know neither of them would care how that day effected me on the estate, and to then find out he moved onto my baby-mother and started being around my son; I wanted to end it all. Total shock had set in, couldn’t eat and couldn’t sleep. Had to go doctors, and just cried as soon I tried talking.

As I’ve said/wrote many of times in my work, I could just get him when he’s an old man; beat the shit out of him at his most vulnerable like he did me, but I won’t. Just hope he dies a painful death. Did tell him though, I’m not a violent person, but if he hurt Tyler just to get to me...no matter the time, I would have got him. Thankfully nothing like that happened, and he mistook my baby-mother for my sister, but Seden’s got a bit more about her than my sister - she cares about her kids, and my sister doesn’t.

I’m too normally a private person, but I’d have put enough out there to ensure that no one is gonna fuck with me and make me out to be a liar, it’s only gonna come off worse for them. He found that out.

I miss my nieces and hope they’re ok.
Can’t speak much on what’s going on, as I don’t go round there anymore, but I do hope they’re shown more attention, rather than her dancing to shit tunes in the kitchen, completely oblivious to what they’re doing. Just insane that my sister can’t comprehend why her oldest daughter shouts and screams in her face - has only got it from her mother, when she’s asked a simple question.

As much as I can appear to be an asshole - I’ll say it again - only child out the three on drugs, yet haven’t had social services involved with Tyler. And Seden would sure agree with that. What does that tell you? lol

Anyways, I’m a lot stronger now and if ever I do see him out on the street, I’m not gonna engage at all. When you are put in that situation, getting away from it is key to your own sanity. Maybe in time you'll understand more about your sister's behaviour. I can't speak to that but perhaps it was her only way of coping, thinking she was holding her family together by staying with him. Remember what master manipulators these people are: he is perfectly well able to convince her that your presence or support (even liking you) was a bad thing. They like to isolate their 'pet' till they grow too bored and move on or go in the opposite direction onto full-blown violence against them.

The psychopath isolates and reduces the world of the person whose attentions they've trapped. Generally, money is one of the biggest controls; cause family rifts, control all spending, make sure it's almost impossible for their interest to run. It's a war of attrition.

My eldest son, by my first husband, escaped from the situation when he was 18, moving out to live with his girlfriend and her mother at the time. I'm glad he did; I was still too controlled to appreciate how the pscho hated me having someone who cared for me and I them. Basically, my son was a threat to his utter control of the situation and so he worked to create arguments and disruption between us by out and out lies, and I was too weak to be able to see through it all whilst trying to keep all of my children safe and in as stable, non-confrontational environment as possible. I'm happy to say I did manage to stay in contact with my older son after a period of time and we worked things out.

I'm glad you got away, I'm glad it made you stronger. If you have concerns about any of the involved children, you can always report them and give your reasons why. I don't know if you can report them confidentially, but ask for assurance that your name won't get passed on to the psycho. With improved knowledge and training in this issue, I'd like to believe they'd be using that as standard practise anyway.

Think, Act, Be Podcast is a terrific source of education regarding mental health issues 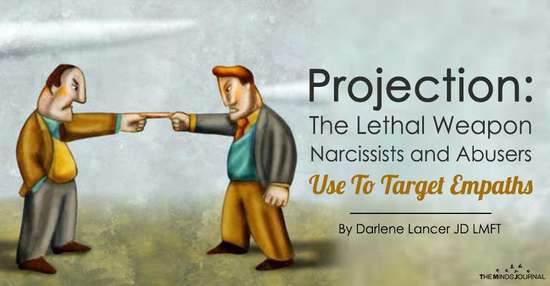 Psychological projection is a defense mechanism in which the human ego defends itself against unconscious impulses or qualities by denying their existence in themselves while attributing them to others. For example, a bully may project their own feelings of vulnerability onto the target.

Joined 3rd May 2018
Forum Posts: 1216
My ex suffered from great deal of paranoia thinking everyone  is in together to directly cause him harm/trouble.  Which was so far from the truth.
But most often people who suffer from that type of mental illness, learn to manipulate it to project that they're alway victimized..again that's the furthest from the truth.
Another well honed skilled they utilize is to be as loud as possible, as dramatic as possible to draw attention.
What's sad is that eventually that particular pattern of theirs becomes so highly noticeable that in the end they end up being their own worse enemy.

Joined 11th Apr 2015
Forum Posts: 8936
Layla said:My ex suffered from great deal of paranoia thinking everyone  is in together to directly cause him harm/trouble.  Which was so far from the truth.
But most often people who suffer from that type of mental illness, learn to manipulate it to project that they're alway victimized..again that's the furthest from the truth.
Another well honed skilled they utilize is to be as loud as possible, as dramatic as possible to draw attention.
What's sad is that eventually that particular pattern of theirs becomes so highly noticeable that in the end they end up being their own worse enemy.

I'm a nihilistic misanthrope...so I just think that all members of the "human species" are psychopaths...but I do believe that the most dangerous psychopaths are the one's that refuse to believe that they are psychopaths. The good news is...and this will be short lived unfortunately...because all us rich psychopaths have been unable to fly all around the world...because factories have been shut down in many countries due to, "gods" pandemic...kid he's not a psychopath lol...this beautiful planet Earth has had a little respite...has been able to heal herself from the destructive habits of us...the psychopaths...ah...how clean the air is at the moment.
Cheers...Harry...a card carrying psychopath.

Joined 11th Apr 2015
Forum Posts: 8936
There is a tad of psychopath within us all, Harry.  Psychopathy is a spectrum, and everyone lands somewhere on it.

Ahavati said:There is a tad of psychopath within us all, Harry.  Psychopathy is a spectrum, and everyone lands somewhere on it.

That's the ULTIMATE narcissism, Harry—keeping the cake for us!

That's the ULTIMATE narcissism, Harry—keeping the cake for us!

Joined 11th Apr 2015
Forum Posts: 8936
In psychoanalytic theory, Narcissistic supply is a pathological or excessive need for attention or admiration from codependents, or such a need in the orally fixated, that does not take into account the feelings, opinions or preferences of other people.

The attention they receive from the "supply source" is essential to the narcissist's survival, without it they would die (physically or metaphorically) because it depends on their fragile ego to handle their unstable self-esteem. There are distinctive forms of narcissistic supply to attain them with two separate sources. Scholars and researchers generally recognise two main kinds of narcissistic supply: primary, acquired through more publicly directed forms of attention, and secondary, generally acquired through attention attained through interpersonal relationships.

The primary narcissistic supply is based on attention in both its public forms such as recognition, fame, infamy, stardom, and its private, more interpersonal, types of praise, admiration, applause, fear, and repulsion.

It is crucial to realise that the primary narcissistic supply represents attention of any kind–positive or negative.  Their "realisations" may be imaginary, fictional, or only evident to the narcissist, as long as others believe in them. Appearances qualify more than the content; it is not the truth that matters, but their perception of it. Therefore, as long as they receive the expected reaction or attention that they had projected through their false self, the connotation attached to it is inconsequential.