Anonymous
I’d advice others to keep writing no matter what
From someone else would get a tip
Personally, I’d not take my hat off
seeing a coffin pass by
telling for other writers to see my stage
and get the fack on
instead of being a wack job
Now who out of the world sits and laugh
around people I dance
before that fly past
so that’s why I don’t say kiss my ass
There’s no truth but hears this honesty
hate mentioning syllables and that cup of water of his not being filled at all
so are we really competing?

As long as you are enjoying yourself at no one else's expense, that's all that matters. Drawings can be redrawn, writings can be rewritten, and when we finally get good at either - we'll be ashes boxed up "to go" in a crematorium's drive-thru.

As long as you are enjoying yourself at no one else's expense, that's all that matters. Drawings can be redrawn, writings can be rewritten, and when we finally get good at either - we'll be ashes boxed up "to go" in a crematorium's drive-thru.

ashes boxed up to go in a crematorium? that mean we get burned twice nowadays? lol

I doubt I’ll get any good at writing or drawing, but it is fun. I just enjoy the style of my handwritten style.

ashes boxed up to go in a crematorium? that mean we get burned twice nowadays? lol

I doubt I’ll get any good at writing or drawing, but it is fun. I just enjoy the style of my handwritten style.


Then keep on doing it and fuck what everyone else thinks. 👍

Some people will give you their sincere opinions. The rest can jump in a lake. At the end of the day, if you are happy with what you've accomplished - that's all that matters.

Having a great afternoon.  Everyon be safe out there.  Everyone keep on writing til your heart is content.  We all need to laugh and enjoy ourselves.

Anonymous
The time is now 8:34pm
I’ve just travelled back from the shop
bought a small milk
in brackets with the list
try not to go on a lot
But I’m now all in
with a can of Co-cockiness-ca Cola smile
packet of chocolate digestive biscuits
haven’t bought the cheap stuff in a while
so that’s some washing up liquid
can’t forget the cheese and onion crisps
plus I remember writing somewhere
that I hated eating them all the time
but yeah, I bought some more noodles K
Sixty one P is now sitting on my bed

And I don’t know what else to write
but to just completely go random
fast speed like Eminem’s Godzilla verse
because there’s him
and I want to be in the same class as Ricky
laughs at Marshall saying scratch pickles
and Doja saying ass and titty’s
it happens it three’s
so with one phrase I do have it on me
because it’s Bobby Tittiams
ripping the Mercedes Benz logo off the bonnet
laugh catch ups
when your on it with the repairs
so sad when that happens
but really reckless is I don’t drive
steal car, and I won’t lie
we could really have a hype
because I’ll break down in the middle lane
of the motorway with no hazard lights

Everyone make someone laugh because it is the best medicine


Between you and I
we’re gonna have to get
over this hurdle G
like How are you gonna sell me purple weed?
Not yet sent to my dealer
but I’m still Carrie Puff on some cali stuff
and looking back on not writing fanny muff
anywhere
because of an angry mum
Not sure why Ricky didn’t spot that also sitting on his bed
which was the bread
swear to God, he is so arrogant
It’s like I’d too match any spliff
with anyone’s alcoholic drinks
see who could still stand up after spinning
And me more likely flipping
and it land, balancing perfectly unlike your 5 p on an Evian bottle lid
Look at my weight
and then on an X-ray find inside your stomach that crumbled cake
How can I be gobble kid?
3 and a half year old Rodney leaving the breast
aka throttle tit
and as for BILLY, go and ask bruce bogTROTTER about him

Having a great night.  Everyone be safe out there in the jungle you call home.  Everyone do domething realky crazy  for yourselves. 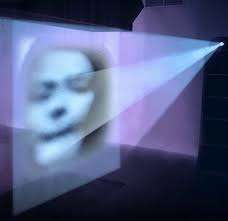 (sweet
the shit I do
the lips
I screw) 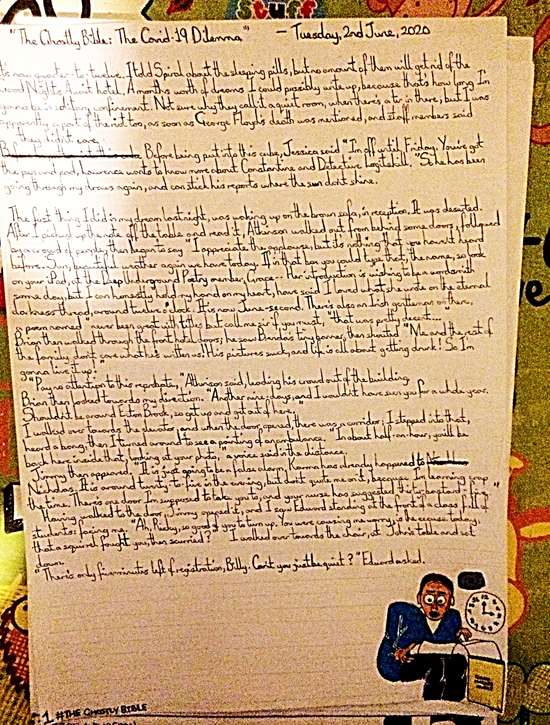 It’s now quarter-to-twelve.
I told Spiral about the sleeping pills, but no amount of them will get rid of the Good Nights Await hotel.
A months worth of dreams I could possibly write up, because that’s how long I’m gonna be in solitary confinement.
Not sure why they call it a quiet room, when there’s a tv in there; but I was apparently a part of the riot too, as soon as George Floyd’s death was mentioned, and staff members said they didn’t care.
Before being put into this cube, Jessica said “I’m off until Friday. You’ve got the pen and pad, Lawrence wants to know more about Constantine and Detective Logitskill.” So he has been going through my draws again, and can stick his reports where the sun don’t shine.

The first thing I did in my dream last night, was waking up on the brown sofa, in reception. It was deserted.
After I picked up the note off the table and read it, Atkinson walked out from behind some doors, followed by a crowd of people, then began to say “I appreciate the applause, but it’s nothing you haven’t heard before. Sun, beautiful weather again we have today. If in that box you could type that, the name, so look on your iPad, at the Deep Underground Poetry member Grace—Her introduction is wishing to be a wordsmith some day, but I can honestly hold my hand on my heart, have said I loved what she wrote on the eternal darkness thread, around twelve o’clock. It’s now June-second. There’s an Irish gentleman on there, a poem named “never been great with titles but call me sir if you must,” that was pretty decent...”
Brian then walked through the front hotel doors; he saw Brenda’s tiny banner, then shouted “Me and the rest of the family don’t care what he’s written us! His pictures suck, and life is all about getting drunk! So I’m gonna live it up!”
“Pay no attention to that reprobate,” Atkinson said, leading his crowd out of the building.
Brian then looked towards my direction. “Another nine days, and I wouldn’t have seen you for a whole year. Shouldn’t be around Ecton Brook, so get up and get out of here.”
I walked over towards the elevator, and when the door opened, there was a corridor; I stepped into that, heard a bang, then I turned around to see a painting of an ambulance. “In about half-an-hour, you’ll be back here inside that, looking at your photo,” a voice said in the distance.
Jimmy then appeared. “It is just going to be a false alarm. Karma has already happened to Nicholas. It is around twenty-to-five in the evening, but don’t quote me on it, because I’m learning crap the time. There’s one door I’m supposed to take you to, and your nurse has suggested thirty-bastard-five.
Having walked to the door, Jimmy opened it, and I saw Edward standing at the front of a class full of students: facing me. “Ah, Ricky, so good of you to turn up. You were causing me worry, is your excuse today, that a squirrel fought you then scurried?”
I walked over towards the chair, at John’s table and sat down.
“There’s only five-minutes left of registration, Billy. Can’t you just be quiet?” Edward asked.