What is something non-sexual that turns you on?

Joined 3rd May 2018
Forum Posts: 1165
When i see couples folding laundry together at a laundromat.
When i see a man and his wife around 78 yrs old shopping at the lingere section of a store, she's limping with a cane and he's trying to find a sales associate to get help to find the right size for her.
When i see birds nesting, one sitting in the nest guarding the eggs and the partner flying to gather worms to feed her to keep energy.
When I see a severed vine trying to root itself to survive in a handful of dirt, to procreate itself.

Those things and more turn me on, believing in love, believing that there's a connection on this earth beyond our capablility to comprehend.


“The greatest part of a writer’s time is spent in reading, in order to write; a man will turn over half a library to make one book.” —Samuel Johnson
Posted: 27th August 2019 10:20am


“The greatest part of a writer’s time is spent in reading, in order to write; a man will turn over half a library to make one book.” —Samuel Johnson
Posted: 27th August 2019 11:40am

Big cutbacks, riding the nose along fast sections, pulling into tight barrels, riding waves all the way into shore, and enjoying the beautiful natural coastline at my favourite point breaks.

Joined 18th Nov 2015
Forum Posts: 285
Making music with friends. When it's all fitting together and we're all responding to each other and we get lost in the flow. Then the song ends and I realize I'm feeling a little.... flushed....

I wet myself every time.

The smell of cloves just send chills thoughout my body, gets my heart racing, and puts me in a bit of a stupor! Also, music (especially a few certain songs), cheese (any kind except American and spicy cheeses), the smell of cinnamon, long/semi-long hair, powederd wigs/similar hairstyle and colonial men's clothes (just sends chills throughout my entire body!) Also Intelligence, artistic ability/thought, open-mindedness (as opposed to small town anti-intellectualism, and ignorant believing that everyone must live the same way, and not look or act any different), twilight (the time of day, not the movie, can't stand the movie), anything to do with pirates/the sea/merfolk/jellyfish/blue holes/underwater volcanic vents/sea glass/beaches (but not touristy, "chairs on the sand" or "flip-flops" type stuff), the thought of being able to be in a seedy part of a city (especially alleyways) (without actually being in any danger) at night listening to mellow or party/dancing type 80s music or 90's trance/house music, just enjoying the neon lights, the hustle and bustle of the people/party goers, and the music, the thought of just driving through a city at night, by myself, listening to mellow or party/dancing type 80's music, playing point-and-click adventure games (especially older ones), the innocence of chasing fireflies like when I was a child, that little bit of pollen I get on my nose from smelling buttercups, birds hopping down the sidewalk, the thought of being intentionally lost in the forest at night, staring at a garden/yard/forest/medaow area in the moonlight, the smell of freshly cut grass, the thought of being able to suddenly go into song somewhere in the forest, or a meadow, or by the ocean, or really anywhere in the moonlight, and play a harp, or a flute, being as immersed in the story of a book/video game/online game/movie as I possibly can be, video games with as much story/information as possible to find throughout the world (Dragon Age Origins is a good example of this), watching really good Anime shows (such as "Cowboy Bebop", "the Melancholy of Haruhi Suzumiya", "Elfin Lied", and a few others), really intriguing/well drawn patterns, textures, and color schemes, and the thought of one day, waking up as a mythical creature, like a centaur, a sheep centaur, a mermaid (after touching or getting wet with water (not other liquids) for a few seconds), a humanoid with four extra arms and/or a fully prehensile monkey tail, a faun, or a naga.

Winning at backgammon,
swimming under a full moon,
daggers,
someone overcoming a fear or hang up,
a person talking about a topic they're passionate about,
well cared for hair,
scars, especially if I don't know why they're there,
seeing someone being kind to animals,
axe throwing,
dancing on my own, particularly with a late night reflection, yes, I know...
laughter
someone being good at a video game,
motorbike noise,
outside somewhere ultra wild,
when blossom falls from trees in thick sheets. 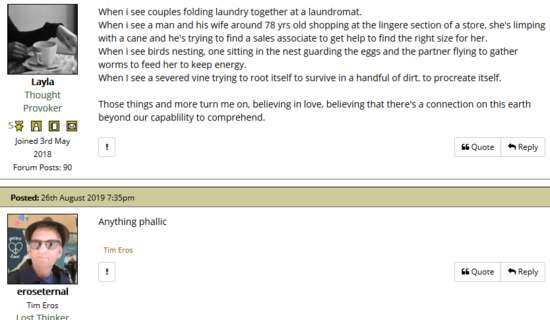 with much respect for eroseternal, his comment after Layla's beautiful expression made my day.

Confidence and self worth, strong and not with drawn