And we’re off! Thank you, Aha! I’ll be back with the poll in just a moment.

The_Silly_Sibyl said:Hi, guys! Seeing as we don’t seem to have group meet ups on Skype/Zoom anymore, I thought that a nice no-pressure community thing to try would be a book club. No obligation if you do decide to try it, just read as much or as little of the chosen book as you want to, and share whatever thoughts you have on it.

How we choose the book of the month:

Nominate a book in a post on this thread. (Include the name of the author and choose books that are easily available/inexpensive, if possible.) Once we have 5 nominations excluding my own, so 6 in total, I’ll start a poll and whichever title gets the most votes after a week will be the one we’ll read.

Fancy giving it a whirl? I nominate The Tribe by Bari Wood. (Available in paperback and Kindle editions on Amazon.)

PS I’m not going to place restrictions on what you can choose, just use your common sense. i.e. Maybe think twice before recommending a book which needs a whole bunch of trigger warnings for stuff like child rape and murder.

Silly, Also maybe get the books from our local library ?  😀

Great idea, so long as your libraries remain open during the current lockdown measures. x 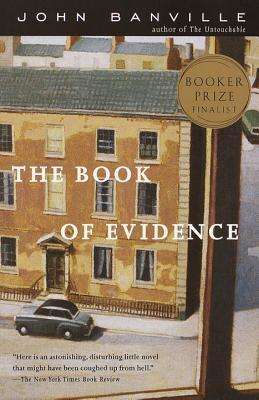 Well, the polls are now closed and bar a last minute march on Capitol Hill I can safely announce that the winner is...

The Book of Evidence by John Banville

So if you feel like participating get yourself a copy, whether library or bookshop or Kindle edition is up to you, and feel free to discuss.

“The book is narrated by Freddie Montgomery, a 38-year-old scientist, who murders a servant girl during an attempt to steal a painting from a neighbour. Freddie is an aimless drifter, and though he is a perceptive observer of himself and his surroundings, he is largely amoral.”

So be prepared for a psychological crime story about guilt.

For anyone who's thinking of participating, it's really quite a great book, if you like Lolita you'll probably like this as well. I think I first heard about it in an old Christopher Hitchens cspan interview when he was asked about what he's reading atm,.. years later, when I noticed the title while browsing Latvia's National Library, I knew I had to read it, and have been wanting to reread it for quite some time now.


One of my fave quotes from the book:

"I have never really got used to being on earth. Sometimes I think our presence here is due to a cosmic blunder, that we were meant for another planet altogether, with other arrangements, and other laws, and other, grimmer skies. I try to imagine it, our true place, off on the far side of the galaxy, whirling and whirling. And the ones who were meant for here, are they out there, baffled and homesick, like us? No, they would have become extinct long ago. How could they survive, these gentle earthlings, in a world that was made to contain us?"

- John Banville, The Book of Evidence

could anyone post a link of where to buy/rent/steal it from?

I know how some of us feel about Amazon, but it's available there. Also here: https://www.abebooks.com/servlet/SearchResults?sts=t&cm_sp=SearchF-_-home-_-Results&an=John+banville&tn=The+book+of+evidence&kn=&isbn=

Joined 14th Nov 2020
Forum Posts: 472
anna_grin said:could anyone post a link of where to buy/rent/steal it from?

Hi, Anna. Not sure where you're based but UK second-hand copies are inexpensive.

Joined 6th Dec 2015
Forum Posts: 2217
Wow, I didn't realize it was so inexpensive. Thank you guys for the links as well

excited to start this this was such a great idea

I did actually vote for Book of Evidence, just because I remember it being endorsed by one of my favourite writers, Ruth Rendell, in a book she wrote called The Reasons Why, collating passages about the act of murder from various works of literature, from scripture to novels and non-fiction.

Joined 6th Dec 2015
Forum Posts: 2217
That's pretty cool Jack, that you voted for my choice. I agree with Anna that this is an awesome idea 🙌☺️

so... when do we start chapter one? can we have a book club discussion thread, or a group? i love a good murder book