Write a poem based on a three card tarot spread 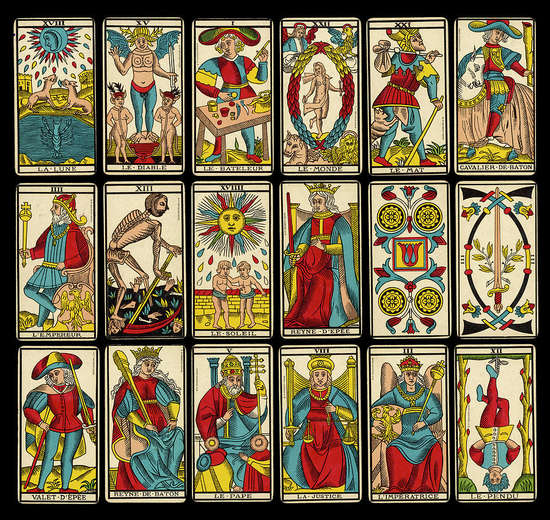 So yesterday, I posted a poem based on a three card tarot spread I felt I really needed to do. This spawned a couple of others having a go at this on the DU, so I thought I would make this a comp. I will include my poem under this post as an example.

I’m a big fan of tarot imagery, and tarot in general to be fair. In fact, I wrote a poem for every single card in the major arcana at one point. They are fantastic little visual aids to find a metaphor in.

- You may use your own tarot cards to draw 3 from if you have some. If not, there’s a handy online card generator here:

- Write a three-part poem on the cards you pull. They don’t necessarily have to be about what the cards specifically mean. Perhaps there’s a metaphor in there for yourself that you just want to expand upon. See where the card takes you.

- No hate, please. If you don’t agree with the use of tarot cards, simply walk away unscathed.

- Up to 2 entries per human

sometimes
you exist
only as autumn

she exists
for your secrets,
her fated sky

My latest poem is a four card spread, but I'm happy to write about poem for this comp. It's gonna be fun 😊

Indie said:My latest poem is a four card spread, but I'm happy to write about poem for this comp. It's gonna be fun 😊

Look forward to it :)

The first draw was numer five, the hierophant.
The Pope. Figure of huge authority.
His advice was not to be disregarded.
Normally I would take his recommendations
With a grain of salt.

However, the second card, Death, also The Grim Reaper
Is a clear indication of a major change coming up
Not necessarily death.
Time to be careful where I put my feet.

The last card, the Chariot (number 7).
A clue that a voyage (spiritual?)
Was on the horizon for me.
I wanted to be ready and thus
Keep away from the temptations of the Devil.
Written by robert43041 (Viking)
Go To Page

The dog is blue and blind.
He stands behind a wooden door.
All that’s else is blank.

A stony and
precarious
figure
much like yourself
perhaps

A floating pair of eyes.
A flaming head in black frame.
Ocean waves below.
Written by Casted_Runes
Go To Page

This poem of mine is a bit too lengthy for the contest, but I figured I would still keep it posted here just for interested people to read since it does have a vibe that fits well with the Tarot theme of the contest. Good luck to all the great poets who entered the contest so far, though! The Tarot is an amazing theme, and there are sure to be some fantastic reads when all is done.

Phase the First: The Moon

It is the past, and it is also a distant future day,
All depending on which way the cards thus lay!
Within the embrace of these shadows, secure in their assured solace,
There, I let my spirit go forth to commune with what lay far beyond.
You shall not find what lies in those ethereal climes without seeking,
Paying dearly the cost to gain what power comes with understanding.
In terror quake the aspirants who come unto the distant pale palace,
Yet I feel no fear, for my hands have held in them the old ivory wand!
I hear the movements of the long dead, their breathless bones creaking,
As they hold for me no terrors, no trial before me can be so demanding.
Some arrive too late, some learn too soon,
The power that can be won beneath the moon!

The seasons change, and with them fortunes,
Until power itself is pointless, lost in a gloom!
Atop the heights of a tower loftier than that which rose in old Babel,
I and my paramour, looked down and beheld the nations of mankind.
Many came to plead their case and ask for the mercy of our lenience,
But we had none to grant, for it was not within our power so to grant.
Wait, oh children of man, for but a while longer and do not dwindle,
Remain fast, until the arrival of my kindred, in chariots that will shine!
Cry not to I but to them, and unto their ears plead for all your penance,
Merciless is the hour when the self-righteous wait, and breathless pant.
They heard not the hour of the trumpet,
Thus shall they be slow walking to judgment!

The cycle is complete, and with it the full design,
A tapestry woven by pale hands, long before time!
The dark maiden at my side stretches forth her hand to the horizon,
Where descend they who from the stars did come of old to teach all.
My ancient brethren, their time come at last, change all with chaos...
The guilty judge themselves, and so by their own doings they suffer.
Ones own deeds are the evidence, and one's own heart their prison,
There is no escape for the corrupt, since by their own works they fall.
Death sings her song, and the earth is altered, the old world is lost...
Whilst unto she and I, ascend those on whom wisdom we did confer.
They rise eternal, savoring sweet breath,
Living anew by the grace of my goddess Death!

Thank you for your entries

@Kou - to be a valid entry, each of the sections should be no more than 50 words, my dear. If you would like to have a little trim on your entry x

Quinlan: What's my fortune? You've been reading the cards, haven't you?
Tanya: I've been doing the accounts. - Touch of Evil

I once knew of
an atheist
who said
tarot
can only be
objects of art
and nothing else.

and told me if
I want
from them
the truth
that I
must really
be stupid.

looking back,
I understand
that like all things
he was both right
and wrong.

the cards do not give out
what laundry needs doing,

what politician most deserves
your vote,

how to end all wars,

or even just find a lost key.

let me gently
remind you

if you find
yourself

there is
only you

the rest
is bonus.

@casted_runes - I can’t accept the second one as a valid entry because it doesn’t meet the criteria, but thanks for sharing your thoughts.

left to reflect
on the ruin;
little drive,
less demand

knowing
I will soon rise again
build my home
on this earth;
any stick, any stone,
every gift in my hand.
Written by ursa
Go To Page

Northern_Soul said:Thank you for your entries

@Kou - to be a valid entry, each of the sections should be no more than 50 words, my dear. If you would like to have a little trim on your entry x

No problem! It was not possible to trim it down, unfortunately, so I just edited my post to have it as just something for interested people to read and not as a contest entry. I also wished everybody luck with the contest too! interesting choice of a theme, and one that is certain to get a lot of creativity flowing.

Page:
Go to:
Latest Forum Discussions
SPEAKEASY
The Gathering Place ( Modalities of Divination )
Today 3:48pm by LunaGreyhawk
1 ... 2324252627
COMPETITIONS
Forwards Then Backwards (A Palindrome)
Today 3:23pm by RevolutionAL (Alistair Plint)
POETRY
Poems of the Days - Free Speech
Today 3:10pm by Casted_Runes
123
COMPETITIONS
Poem Of the Month - MAY 2022
Today 2:36pm by MaryMadrid
SPEAKEASY
The Politics Place
Today 1:31pm by MadameLavender
1 ... 4950515253
SPEAKEASY
snippet for a poet
Today 7:50am by Weak4hissmile (the.LittlestSP-EXPO)
123
Follow Us