A little fun with eavesdropping. Write a poem based on a conversation you overheard or one you could imagine overhearing. 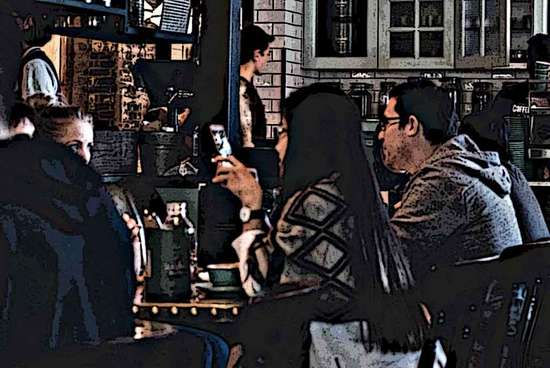 We find ourselves in many situations to listen in on conversations (restaurants, sporting events, at work, phone conversations, family interactions, zoom meetings, etc.). Use your poetic license to fill in gaps, edit conversations, or complete a narrative as you wish. Enjoy the possibilities.

No graphic erotica (implied is fine)
2500 words or less please

Not wishing to eavesdrop
I never do
But how could iIhelp it,
My palate enjoying the superb filet mignon
While my ears were attuned
To the conversation at the next table
A couple celebrating their fifth wedding anniversary
Her husband was happy to present
Her with a charming bracelet
Which she accepted with lovely words
But he knew full well that the much more expensive
Red violet taafeita ring on her
Right hand was a gift from
A ''very close friend'' of hers,
The type of gift beyond his means
But he was not jealous in the least
As she opted to wear it even on this
Special day.
''How is Gerry doing?'' he asked,
As he held her hand and
Deposited a gentle kiss on the ring.
Written by robert43041 (Viking)
Go To Page

Thank you for this entry. Left me imagining the rest of the story.

That's the idea, I suppose, not going tooooooo far in a certain direction.    Regards, Robert.

Two nurses sat in the commissary next to my table.

"I wish you could have been there. It was such a tender and sad moment," said the taller nurse with shiny gray hair pulled back in a bun.

"Is this the patient we lost on the fourth floor?", the younger nurse said softly.

"Yes. So young. She should have lived at least to my age or beyond. But, her lover's grief was beautiful. She was loved."

That was all I heard, but I imagined what the older nurse must have seen and what the young lady's lover must have felt. I asked him to speak to me as I sat there under the florescent hospital lights.

How can something so beautiful
end so completely?
How can a human so perfectly
balanced in function and grandeur
fail and cease to be?

The lips that kissed parents
and lovers
while forming words of affection
for so many are still.
The tongue that tasted
the saltiness of my love
lies still behind her parted lips.
The breasts I cupped and kissed
are growing cold like the hand I hold.

A tall nurse looks on with kind eyes
as I bow to bury my face
in my lover’s breasts,
hiding my tears.
Written by LostViking (Lost Viking)
Go To Page

I can still remember it like it was yesterday,
They sat on the couch across from him,
I can remember her saying “we’re doing ok”
“And we don’t need you” my cousin told his father.

I remember I stood in the kitchen,
Angry and sad at the same time,
Although my cousin and I weren’t as close growing up,
I was very attached my uncle.

Those words embedded themselves in my memory,
Divorce can play a harsh tune in resentful hearts,
I know my uncle was a good man,
After all, he was there for me more than my own father.

Then as a grown-up I had the same struggles,
I feared hearing those same words,
Then I sympathized with my uncle’s memory,
At how those expressions must have felt.

It’s been over thirty years since that day,
A father lost his son in the heat of a bitter divorce,
I miss a cousin who never gave us a chance,
Because adults sometimes aren’t civil.

The one time I eavesdropped on a conversation,
Was the worst exchange I could have heard,
The time has passed yet the recollection
Seems faded but still hurts.
Written by wallyroo92
Go To Page