Poem of rhyme or pros about volcanic activity (geological or emotional)
Poem limit 42 lines (no epics)
original work only no pre-writes
two entries per capita
As the volcano in La Palma is still active, take inspiration from its awe, perhaps emotional tempest?  I will submit an offering to get things started

Like ants they flee, or shipwrecked rats
from the anger that has no reverse
the earth beat its chest and spat
now its dormancy had been disturbed

Precocious temper, as it woke
the starting pistol thundered loud
teenager, go off on one, unprovoked
fling its arms, a redhead with incandescence, shout

Unconstrained the boiling pot
overflows and spews the slick
This is raw beauty, not some despot
it's red tongues, devouring as they lick

Hot ash and smoke its waving flag
reclaim the moonscape, anoint with virgin land
in bawdiness it billows and it brags
stamps its foot, I AM supreme command

A majesty that cant be bought
striking like a serpent waiting poised
to it, our lives are less than nought
Natures bees hot sting, a long time sore
Written by slipalong
Go To Page 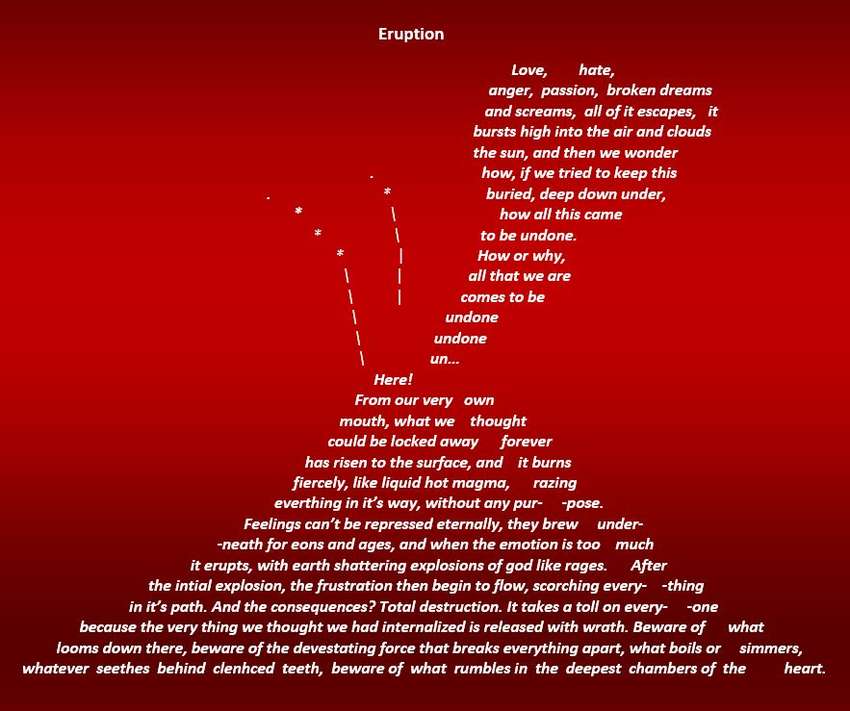 Luscious lava spilling from her center
Like an explosion. People run away
In terror but it is how this earth was
Built, from spilled lava and tremors
Like an earthquake. The earth sways
And tilts but somehow like a vase
Or a sailing ship we keep steady.
Written by eswaller
Go To Page

Joined 1st Jan 2018
Forum Posts: 670
as an avid competitor myself I thank you for your support and exceptional entry

Joined 11th July 2012
Forum Posts: 1365
Thank you very much slip for the honor. Every other day I log in and there are live images of the volcano spewing lava.

Hope all is well.

Joined 1st Jan 2018
Forum Posts: 670
thanks for your entry WR I had hoped for more support as I have well over 400 competition entries. It deflates one a little and I reasoned that broadening the brief to emotional eruption would add to the appeal. It seems the eternal themes will always attract the crowd
PS recently celebrated four score years ( maybe the oldest on the group)? Regards Slip