I know, I know
this just wonĺt fly
Iĺm no sleeping dog
that my kin will let lie
I must arise
with my world interact
not perpetually nap
do I look like the cat?
I must demonstrate
my locomotion
else my stillness
will cause a commotion

One month of poetry

A month is potentially long enough
to start new writing habits and rituals;
both good ones and potentially bad ones

A month is thankfully long enough
to remember just why youĺre a poet;
for the joy of expression
as
walls
break
down

To awaken to a new morning
To be able to feel fresh hot tear drops as they weave across your face
Down your cheeks to light upon your shirt
To light upon the floor below you, supporting your feet
Being an unmoving and unwavering rock
The foundation where one can begin again
To renew or refresh at a whim
Hard work, blood sweat and tears
A transformation, not merely a whim
But a determination to become something different, something better
A metamorphosis if you will

I'm all in for freedom, justice and equality
I know, realistically, we won't always agree
Forget equality, we just wanna be treated fairly
Cause equality seems to be nothing but a dream

We can be on the same team without having all the same views
On some things we can agree to disagree if we both so choose
But if you are as tired too, then do what you can
Open a can of words in order to lend a helping hand

Wow I made it to the finish line
I started something and  finished it,
Iĺm happy with most of my submissions
Iĺve no problem admitting it.

And while some of my poems were
corny, many were deep & meaningful,
a few were goofy and silly
a bunch seemed barely readable lol

Itĺs been an amazing privilege
to be part of this journey called
DUP Glo/NpoWriMo 2021
I will cherish this experience always
One & Done!

And all the mists of time are moving on
as shakers in our history play their game
the freedoms we once had are vanished, gone
to serve unholy fortunes and their fame

to live each day in love and gratitude
and trust the outcome from a higher view.

Hear me, nobody else will
Listening isnĺt the trend
Theyĺve gone deaf, but
You havenĺt failed me yet

I follow the lines mostly, and start my chatter
In cursive
I write because I am lonely
Thereĺs always a notebook lost too
I know I can find you almost anywhere

So much wear and tear
Such soggy corners and frayed edges
Raw and ready to cut unwelcome hands
Please forgive each reason I write
Slice me, if you must
But as long as you allow me, Iĺll keep venting
In penciled speech

After three NaPos
I have learned something, a trick
To stay in the comp

When writer's block comes
And the muse is not around
Don't panic, relax

Still your mind, be calm
Just let your thoughts run its course
Then go with the flow

If that doesn't work
Try another idea
Expand it to fit

Tune up your senses
To give you inspiration
Watch, listen, feel

Bear with me to find a redemptive quality
By what you esteem as redemptive in nature
What you decide is worth saving
On the scale of how you measure
What is my heart to you?
Well said stranger, trash or treasure?

Can a glimpse of you cause me to better understand myself?
When all we are is the same question
I pray in your aim to cope with life, my words may help

letting loose that glow of her cheeks
the ôdonĺt-you-dare-fucking-pardon-my-French-sirö
sword wieldy, light touch
with barrels of tea parties in Boston
putting rogues, yea, & kings ill at ease
lest she set her wits upon them

sheĺs sometimes modest, tho
in fact
you might not note til itĺs too late
that trusty crew of 32
has long been sworn to her 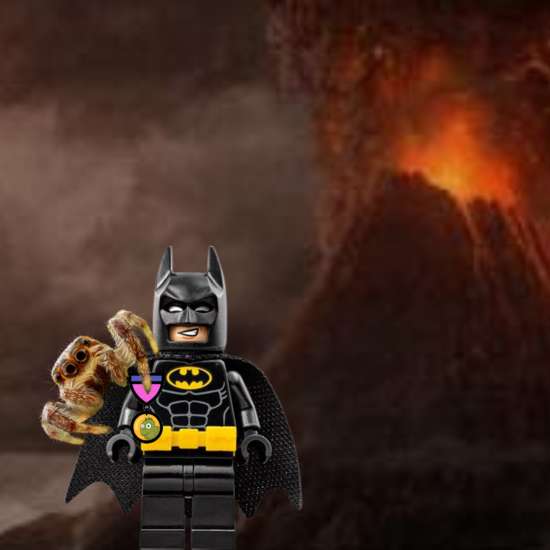 "Look!" said the Spiderweb Mistress, pointing to the sky.

And everyone did look at what was sailing up through the air in a trail of smoke from the volcano ... before turning to gape at her with their jaws dropping to the ground. She was no longer a giant eye! MOAR!ON's spell upon her had been broken. She was back to her iddy biddy arachniddy self, which meant . . .

Everybody began cheering at the realization, except for the Mistress and her sisters, and the Ents, whom the spiders ushered to stand around in a circle. Then Sheila Lobelia and her crew wove a huge web attached to all of the Ents to serve as a safety net. Good thing that it was sticky too, because whatever landed in it would have trampolined to the next continent!

"Hold steady!" yelled Treenuts as the Ents rooted themselves deep in the ground for support.

What was caught in the web was not one thing, but several - Satin Gamjeez suffering from severe motion sickness, the Dark Knight attempting a belly flop, DUGlo Baggins glowing brightly and just happy to see everyone again and ... MOAR!ON! Though he was no longer twenty feet tall, but a plain ole Earthwyrm like he use to be thousands of years ago.

"Maggots!" Salamandar yelled at his Gobnoblins. "Keep fighting! This war isn't over until I say it's---"

The White Lizard was interrupted when Grubgrinder landed on his chariot, flipping him out backwards onto his head. He was wearing a thong underneath his white robe. It was not pretty.

Smug the Dragon, scourge of Muddle Earth, and last true enemy still standing on the battlefield, was struck between the eyes by the large chunk of rock launched from Mount Dumb. He haphazardly flew off to the North in a bout of double vision and tried to fly between what he thought was the Two Point O Towers. It was actually one tower, ThincTanc, which he flew straight into, shattering the absurdian architectural wonder into a bazillion pieces.

MOAR!ON in a panic, tried to pick up Grubgrinder, and threw out his back. All the chaos he had inspired over thousands of years had come to naught.

The Nasty Ghoulies were no longer nasty or ghoulish! They peeled off their spikey, plated armor and black cloaks, and began to Break Dance!

NaPoWriMo was saved in the final hours of April! The Spiderweb Mistress kissed and hugged her Dark Knight. Rosie Grace gave Satin Gamjeez some Dramamine and told him he was the bravest idiot she had ever known. Everyone celebrated by drinking ale from their Tropheees.

DUGlo Baggins sat himself down on a rock and finished writing his last entry in the light radiating from his own body. He swore to never go on another adventure again as long as he lived.

And to be very careful about what he drank in the company of Dwarves or purchased at future yard sales. 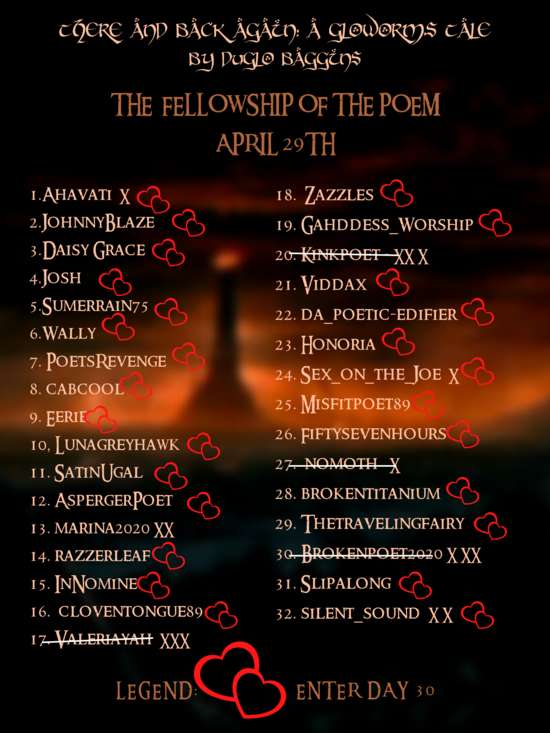 Good morning Great Poets of the Fellowship! Who feels LOVE IN THE AIR?! We certainly do! T-MINUS ONE ( ZERO IF YOU'VE ALREADY POSTED TODAY ) DAY TO GO!

A WHOPPING CONGRATULATIONS to all who have posted their No 30! What an incredible feat you have accomplished!

If you've received a double-heart you may proceed into day 30! If you have not, you have until midnight, your time zone, tonight to make up and complete the challenge!

CONGRATULATIONS AGAIN TO ALL WHO HAVE COMPLETED THE CHALLENGE! Johnny and I will be double-checking the entries beginning tomorrow, and if all are in compliance, then you will be awarded a specially designed trophy from Webmiss!