The Misfit So Alone

And somehow being different made you cool

Down to the wire

Memories of roots music
garnish my life
grandma played piano
In a teetotaling jug band
around the campfire
dad would play to my delight
his ukulele and banjo
our smiles framed by firelight
while we sang
“You Are My Sunshine,”
“Home on the range,” and
“This Land is Your Land”

When much younger
Country music I berated
considering it low class,
thoroughly uneducated
now much older
ostensibly wiser
I empathize more
with this storytelling genre
and its honest depiction
of the human condition

Pushing past the anger I allow myself to feel again.
I really haven’t spent too much time reflecting,
mostly because I’ve been here before.

Seems to me, each time gets easier to let go
I think that true love between two people
is far more rare than any of us realize.

As corny as this may sound, the truest
love is the one you give to yourself.
All these years I’ve been looking for
the perfect mate to make me happy
when in reality I’ve been here all a long ...

The days always seem to go by too fast
In a moment it’s here, then breathes it’s last
Leaving little time to compare and contrast
The sands are gone, filtering through your grasp
Still looking for answers through the air
Though long ago stopped the others care
Which leaves you alone standing there
To time a slave. And long ensnared
There isn’t much you can really do
But stand there and compare just a moment or two
But time moves on with you as is your due
While you lay awake, to simmer and stew

In the distance at the back of my mind
a line appeared, strangely self-defined
as an “enemy line”; I re-combined
off-beat words — lobbied a few bombs — smiled … all fine

Then my mind decided to attack …
fired the alphabet at random — taken aback
I faltered and tottered … regrouping, I stacked
a pile of Latin quotes and charged … Smack!

yet suddenly, unexpectedly, they said this mission
is over, co-operation is more efficient.

its so very tiresome
to hear the extremist left brains of the world
intellectually battling out abstract concepts
or striving for the solution junky trophy
with their square words
their suit and tie sentences
the hard on for that educated tone
filled to the brim with unbending beliefs
blah blah blah'ing into the black hole of knowing
a wondering...
is there room for words to be woven with soft petals and soft hues of mauve in IRS  notices?
may we be delivered auto insurance statements with a vivid description of what a sun kissed jasmine bush smells like on a dewey spring morning?
is there a way to feel the way the world smiled back at you when you first opened your eyes this morning when discussing credit limits?
-a teeny plea from me for a more poetic world
73 UWC

Joined 12th July 2017
Forum Posts: 183
My apologies for being late for the 28th, work shifts got changed and it proved to be a busy and stressful evening.

There
Is a letter
Landfill, at the back
Of my closet, a collection
Of various fonts, colors, designs
I’ve lost track of most, buried and crumbled
Those poor notes.. declaring love, lies
Blatant and empty, what a waste of paper
Quite frankly, it’s all trash now, just festering itself in a cobwebbed corner of my desolate nook
I’ve already decided they won’t be reread.. come to think of it, most are unopened. Perhaps there are promises sealed up somewhere
But for the moment, my closet grows with more stacks of recyclable material. When one falls from the top, I’ll begin my declutter. 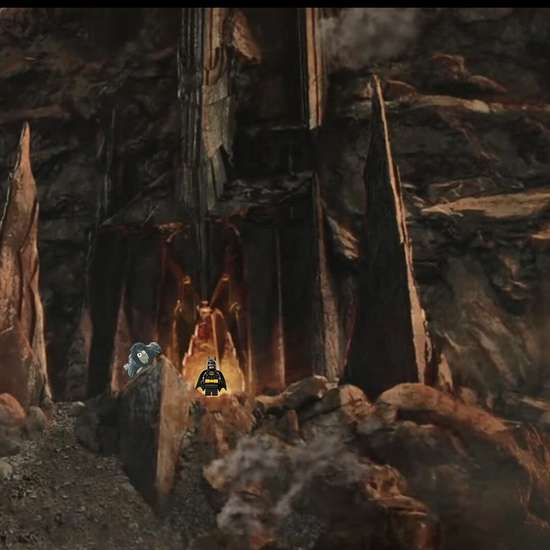 "Here it is!" cried Smuggle and Duggle in unison, pointing at the open doorway leading into the volcanic mountain that was Mount Dumb. "No time to waste!"

The Dark Knight was exhausted from carrying the Wyrms.

The One Poem ™ to rule them all

"Are we there yet?" DUGlo asked from within the haze that swirled around in his mind. Or was it sulphuric ash and smoke from the molten fires roiling about in the heart of the mountain? He couldn't say for certain. That foreign voice answered him with,

The One Poem ™ to find them

and tempted DUGlo to give into its power - forsake all other forms of verse. How easy it would be to spend the rest of his life writing ABAB rhymes, never having to challenge himself to do more . . . put in some repeated choruses, become the latest Country Music sensation, sing about having an achy, breaky heart . . .

The One Poem ™ to bring them all

. . . resurrect the heyday of Nashville when records were churned out factory style like kitchen utensils and office widgets . . . and he wouldn't have to listen to any more of his trainer's minimalistic musings . . . Gamjeez instead could become his manager, his very own Colonel Parker . . . DUGlo could ride around in limosines with an entourage, a sort of Fellowship of the DUGster, eating fried peanut butter and banana sandwiches . . .

And in the darkness---

"MISTER DUGLO!" Satin was practically shouting to get his attention."We made it!"

The Glowyrm looked down from the Dark Knight's shoulders into a terrible chasm of bubbling magma. The heat rising up into his face was tremendous. His body felt extremely parched, as if an onion ring left in a deep fryer for too long.

"Are we having funyuns yet?" asked MOAR!ON, reading DUGlo's mind. He entered the archway and towered above them. Despite being the next best thing to a demonic wyrm, as well as a raging dork, he had his moments of comedic genius. "Hand over The One Poem ™ and I promise to make you my Chief Librarian. You can play with all the pretty poetry books that I won't be having incinerated. Mwuahahaha!"

"That does sound a bit tempting," said DUGlo as he tried to shake the cobwebs out of his head.

"You don't mean that!" cried Satin with tears in his eyes. "You have to fight this spell you've fallen under, Mister DUGlo! He means to make us all be slaves to the Poem's evilness!"

The Dark Knight ripped The One Poem ™ free from DUGlo's neck and dropped his companions to the cavern floor. "Sorry, kids, but this Daddio can't go on living knowing the love of his life is an immortally freakish, giant eyeball," he said. "I'm going to destroy the darn verse if it's the last thing I do!"

He turned towards the chasm, ready to toss the Poem to its destruction, when Smuggle and Duggle leapt onto him as if a wrestling tag team. They poked their Froggy fingers through the eyeholes of his mask and yanked hard on his leather bat ears. "Give us our Precious back, you filthy flying rodent!" they howled.

MOAR!ON, fed up with the entire bunch, stepped forward to smite them with Grubgrinder! And that's when the ledge beneath everyone's feet broke free, sending them ALL surfing on a large piece of rock towards annihilation!

When The One Poem ™ slipped out of everyone's grabby, grubby hands, and fell into the magma. It caught fire. Mount Dumb erupted in protest, launching the rock they stood upon as if a missile thousands of feet into the air! They were high in the clouds above Muddle Earth with no where to go but DOWN.

The Dark Knight spread his arms to no avail, as the flames from the volcano had burned holes through his cape.

That was it. They had succeeded in saving not only NaPoWriMo, but all of Muddle Earth.

And now they were going to be bugsplat on someone's car windshield.

My other accounts at DUP are Magnetron , Anarchitect , Psycotic Mastermind , & Mary Walker
Posted: 29th April 2021 10:59am

Falling off the shoulders of giants

You can find Jack
in some late bar
off the main drag
that smells of pizza,
TV turned up too loud,
beers stains on his belly.

He shouts at strangers
tells them his problems
tries to sell his magic beans,
they nod because they know
what he means.

He pawned the golden eggs
left by his mother,
for drinking money
and rolled up cigarettes'
sleeps under the damp
leaves of an abandoned
beanstalk.

Afraid of being eaten
by unfamiliar spaces
he only speaks to giants
mostly in rhyme and always
without reason.

One day soon Jack
won't come back from the market,
the Vicar will plant him in his garden
and say a few kind verses
in an unkept corner
then forget the words he said.

Only an old lady carrying sticks
will see the green shoots
rising through the fresh dug earth,
followed by Jack
as he climbs above the clouds
one last time.

Will GOD forgive and forget their iniquities?
Especially if they spent time on their knees
Begging Lord please save me from my pain
Was his answer to allow them to be slain?

Can you explain why suicide is a ride straight to Hell?
If he's omnipotent, wouldn't he be able to tell?
Wouldn't it be revealed that they feel lost and hopeless?
Does he administer duress as a form of stress test?

When our best just isn't enough to persevere
Will he grab the wheel when asked to steer?
What was once clear has now become opaque
Guess we have to be good for goodness sake 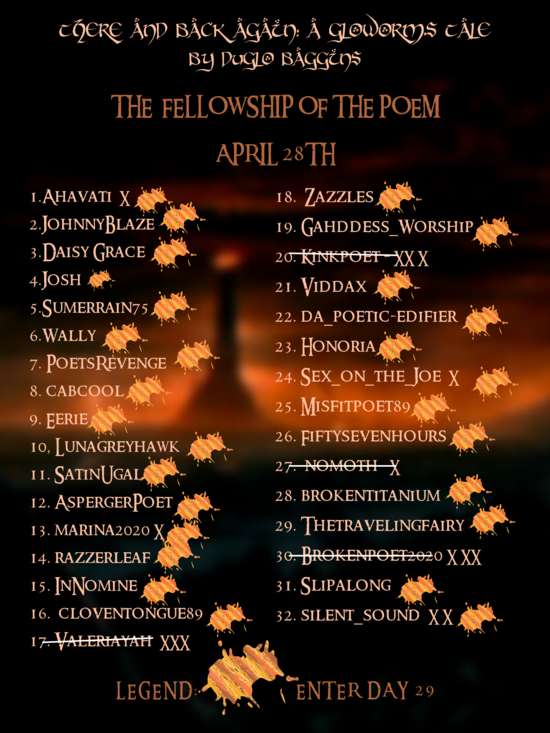 Greetings, Great Poets of the Fellowship! T-MINUS TWO ( ONE IF YOU'VE ALREADY POSTED TODAY ) DAYS TO GO!  Wow! What a NaPo! If you see bug splat on your window, wipe it off and proceed into DAY 29!

You've all done a bloody bang-up job this year! Congratulations on your perseverance and dedication to this challenge! Particularly the first-year entrants!

Fire, shooting sparks
through black of night
as spirits, ascending;
by day, burning
with family warmth
because community reminds us
we are not alone
at another year's close

Solstice, a moment befalling
a symbolic death and rebirth
of an old sun; ritual
offerings of reverence
festivals of worship
and dance permeate
the rising of light

Somewhere a ball drops
signaling the end
of another year;
and somewhere in the sky
the Moon, waning quietly
into herself,  oversees
a new one, sans any pomp
and circumstance
. . .